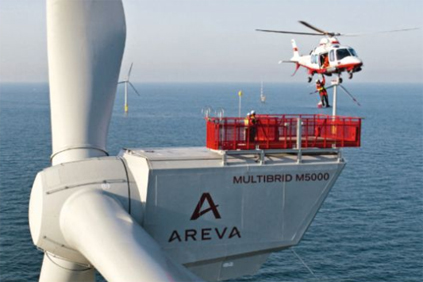 The 5MW Multibrid M5000 developed in the late 1990's by German engineering firm Aerodyn Energiesysteme is considered a clever but for a long time undervalued wind turbine technology. A prototype was installed in 2004, and under the wings of Areva enjoys increasing offshore popularity. A successor model version with 135-metre rotor diameter is in development.

Multibrid stands for Multi-megawatt and hybrid - a game changer as it offers a new hybrid drivetrain solution between direct-drive and high- speed geared, aimed at blending low head mass and high reliability. The drivetrain comprises a single rotor bearing, a single-stage planetary gearbox and a low-speed PMG, incorporated into a single load- transmitting cast structure. M5000 generator bearings form an integral part of the gearbox assembly. Against the typical roller-type bearings that dominate the market, Areva's slow-rotating slide, or journal, bearings for the gearbox shafts are compact and offer long service-life potential. Full enclosure of sensitive components has been achieved to combat the aggressive ffshore environment. Noteworthy is that faster, two-speed hybrid systems with smaller PMGs and reduced use of rare-earth metals have become a major industry trend because they are currently considered superior for cost of energy.

This 3.6MW pitch-controlled, variable-speed wind turbine with 107-metre rotor quickly grew from a prototype in 2004 to become the "offshore workhorse" and a major success. In 2009, the 120-metre rotor model appeared. The non-integrated drivetrain design, with a two-bearing main shaft support and three-stage gearbox, is similar to Repower's 5M/6M turbines, with one difference being Siemens' four-pole, squirrel-cage induction generator, requiring a "full" (100%) converter. The advantage is that it avoids use of slip rigs, giving good grid compliance. Head mass remains low despite longer blades, as Siemens has switched to 58.5-metre, slender blades, also reported to help limit turbine loads. Company figures report a 10% increase in energy capture with the longer blades.

Repower's 5MW offshore prototype with 126-metre rotor became the largest, most powerful turbine in the world in 2004, evolving into the 6.15MW model. Its nonintegrated, high-speed geared drivetrain comprises a main shaft supported by two bearings and a gearbox connected by a flange. The generator is located off-centre, and the overall layout enables full gearbox exchange in one day, without rotor removal. Frequency converter, switchgear and medium-voltage transformer are sited in the nacelle rear, which is completely sealed against the harsh marine air. The 6MW turbine used some 5MW design reserves to enable a 20% power- rating increase. The design upgrade with a higherrated gearbox and generator resulted only a modest head-mass increment. Quoted yield increments are 12.0-15.0% at 10m/s mean wind speed, 10-13% at 9m/s, and 8-12% at 8m/s.

Turbines of the year. The products that made the grade in 2012.