Global Markets for Windpower 2017 quantifies current and future markets, and provides an understanding of key market drivers and trends over the next three years.In a detailed overview of the status of the wind power industry this report provides market sizes and forecasts broken down by key component and geographic market.

This report is the definitive study on the global wind power industry and represents essential reading for anyone working in the sector. 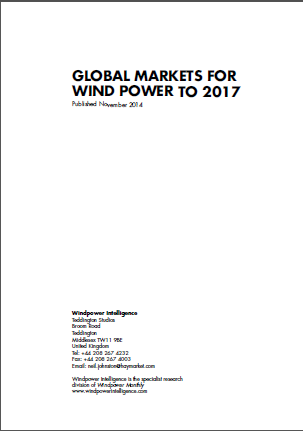 How will this intelligence benefit you? 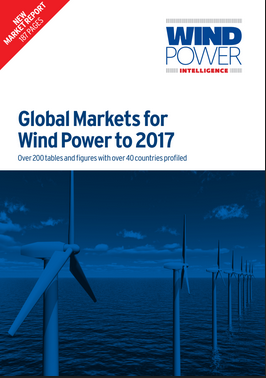 This report takes a close look at wind power prospects to 2017. It portrays an industry growing at a healthy pace, with wind energy contributing a significant share of electricity to the grid in well-established markets around the world and starting to make inroads into an ever-growing number of new locations.

Recent growth has been led by China — driven by a supportive state government eager for domestic supplies of energy to reduce reliance on imported fuel and to meet rising demand.

The wind industry benefits from a generally supportive regulatory system and strong manufacturing skills. It has the potential to grow further still.

Europe has seen a loss of momentum caused by concerns over excessive land use and rising energy bills. Spain — Europe's second largest wind country in terms of installed capacity — is at a standstill as a result of a moratorium on new installations.

In North America, the US has seen the sector struggling with Federal subsidies, offshore projects delayed time and time again, and the phenomenal success of rival energy sources such as shale gas.

As far as project development is concerned, this report analyses developers’ market share in the different regions. In terms of funding, it finds that a number of private investment firms and renewable energy funds are playing a growing role — confirmation that they see the potential for good returns in the sector. Bank finance is heavily involved, especially in Africa.

This report is based on the Windpower Intelligence (WPI) database of global projects, which tracks the stages of development at more than 10,000 announced wind farms (>5MW) in 115 countries. It also feeds on independent research carried out by a global team of experts.

For the purposes of this report, we only took account of projects that are currently ‘in progress’, meaning that they are not yet in operation, nor have they been put on hold or cancelled. The WPI Tracker was used to produce a bottom-up forecast of future market trends.