Norwegian state enterprise Enova and wind turbine developer Sway are currently immersed in an attempt to build a floating 10MW turbine that will eventually be installed in the deep waters off of the country's coast. It will be the first 10MW turbine if the prototype is launched next year as planned.

Across the North Sea US manufacturer Clipper Windpower subsidiary Clipper Marine is ensconced in its base in Blyth, northern England working on its own 10MW product, dubbed the ‘Britannia' turbine. 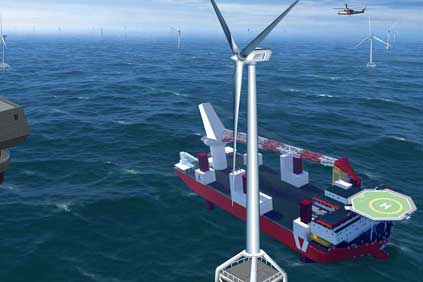 There are a number of similarities between the two other than the capacity. The blade diameter for the Britannia turbine is 144m as opposed to Sway's 145M. However, the Britannia turbine will be fixed to the seabed while the Sway project is designed to float as well as tilt at angles of up to 8 degrees.

However, with offshore projects continuing to be commissioned using products such as Siemens ‘workhorse' 3.6MW turbine, one would ask whether building a 10MW turbine is simply mending something that's not broken.

Speaking to Windpower Monthly, Clipper Marine's managing director David Still said bigger turbines made more sense in terms of economics. He said: "I've been involved in wind power since the first turbines were built in the UK. Yes, there are large machines out there such as 6MW etc but that doesn't mean they're necessarily the most cost-effective solution [in terms of running and maintenance]. Offshore needs a 10MW turbine."

Still said Clipper planned a UK test for the prototype within the next two years and that its blueprint would stem largely from its 2.5MW Liberty turbine. Still was unable to give too many details on the Britannia's design at this stage but said the control systems, drive train, blade design and gearbox would all owe something to the Liberty.

Bearing in mind Britannia will be fixed to the seabed, the design will need to avoid the foundation problems faced by recently built offshore wind farms. The problem, affecting developments such as Horns Rev 1 built in 2001, is based in the grouting used at the top of each turbine's monopile.

The grouting supports the tower by holding the monopile foundations in place. It is beginning to fail as a result of the high stress levels imposed on the turbine above sea level. Investigations revealed the foundations at a number of offshore wind farms have shifted.

Speaking about the issue, Still said that he would watch the situation closely, adding there were a lot of wind projects in development "that had not been fully considered yet".

Should Still's vision for the Britannia turbine come to fruition, affected offshore wind farms such as Horns Rev 2 with its Siemens 2.3MW turbines, might have another problem besides a shaky foundation - the meager capacity and comparative high maintenance cost of their wind turbines.