A 145m diameter turbine, capable of generating 10MW is currently being constructed near Bergen. The prototype will be tested onshore for two years with the eventual aim of using it in deep water offshore, something Norwegian companies have long been preoccupied with. It is notable in a number of ways, because as well as being the largest turbine in existence the machine will also incorporate a number of novel features. 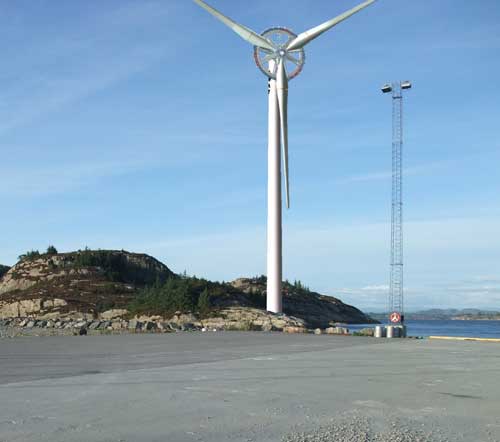 The concept itself has been developed over a period of six years. The turbine will be mounted on a floating tower that, according to designers SWAY, 'consists of a floating pole with ballast in the lower end'.  The tower is then anchored to the sea bed using a single support and a suction anchor.  The complete system 'gives' in response to aerodynamic forces and can tilt at angles of up to 8°.

Additionally the structure uses a downwind rotor, tilted in the opposite direction and so that it is continually lined up with the wind.  When the wind direction changes, the whole assembly – in response to aerodynamic forces - pivots via an undersea bearing. The tower is reinforced with a tension rod system to enable it to carry such a large turbine.

Although large downwind rotors have declined in popularity since the 1980s, there is now a re-awakening of interest. More sophisticated modeling techniques are now available to analyse the complex dynamics and one of the issues that worked against their onshore use – noise – is less important offshore. Moreover, a number of floating structures have also moved from concept to reality since then.

SWAY has a number of shareholders that are experienced in the offshore and energy industries, including Inocean, Statoil, Scatec and Lyse, and nearly €19 million has been raised. The design has been analysed by consultants Garrad Hassan and the certification body Det Norske Veritas has been engaged to review the design.

It is hoped to complete construction of the 10MW prototype turbine this year and testing will continue for two to five years. Assuming the schedule is met, it will be the first ever wind turbine with that capacity, and the largest in the world. Furthermore the high winds expected in Norway's offshore waters favour the use of turbines with high ratings, and the deep waters will provide it with a good test.

The country has a 35GW pipeline and a healthy PPA market, but low power prices and grid issues could put investors off and slow progress

‘Legislate, facilitate, collaborate’ looks like a recipe for success judging from the selection of countries Windpower Monthly examined