The US International Trade Commission (ITC) in Washington DC has sided with MHI and ruled to end the probe -initiated by GE - over whether US imports of MHI's flagship 2.4MW wind turbine should be banned because the product is infringing three of GE's wind-turbine patents.

The brief decision, issued by the full six-member ITC on January 8, ended the investigation but did not explain why MHI — and of its two subsidiaries — are not breaking the Tariff Act of 1930. The commission will issue its opinion shortly – which is estimated to be by about mid-February. 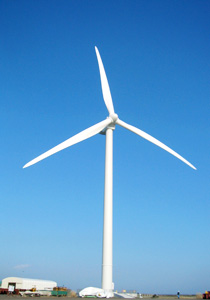 The patents in dispute are for basic aspects of wind-turbine power electronics — variable speed (VS), and LVRT electronics.  GE is thought to license a suite of its wind rights —including the VS and LVRT--for as much as $25,000 per megawatt. That’s a sum that would make this dispute worth many hundreds of millions of dollars in intellectual property rights alone, not counting the impact for the companies in turbine sales and market share.

Had GE prevailed in this key round of the clash of the titans, imports of Mitsubishi’s flagship turbine could have been halted within 60 days. Plans for a $100-million factory in 2011 in Arkansas for assembling Mitsubishi’s 2.4’s in the US—a first-- could also have been scratched.

"Mitsubishi’s very happy that the commission has reached this decision," said Roger Taylor, who represented MHI at the ITC trial in May 2009.

Spokesman Dan Nelson of GE said that his company is "extremely disappointed" but had yet to decide on its next move: "GE will explore all of its legal options and will continue to vigorously protect its intellectual property."

The ITC’s requests for legal briefs from MHI and GE showed that the commissioners were considering whether GE’s patents are too broad. Many wind experts have long seen the variable-speed patent in particular as overly sweeping and in part the relic of a young industry in which basic issues such as protecting intellectual property are only now being addressed legally with deep pockets.

The latest ruling is key in the cutthroat competition for selling large turbines in the US market in the near-term.  The US conglomerate, which dominates the US market along with Danish wind giant Vestas, is launching its rival 2.5MW turbine in the US later this year. And MHI is trying to establish itself in the fast-growing North American market. "The 2.4 megawatt turbine is very important for Mitsubishi getting its edge back," said Tim Stephure, wind analyst at Emerging Energy Research in Massachusetts. The 2.4 is really their key to competing in the US on a larger scale."

The dispute has also become highly politicised; an unusually large number of politicians from states with major stakes in the fight have weighed in.  Arkansas has high unemployment. The plant is expected to create 400 jobs. Arkansas Governor Mike Beebe wrote to the ITC: "An impermissibly broad reading of the patents involved in this case would have significant adverse effects on employment and wind energy development in my state and in the nation."

And GE has massive clout in the US. Senator Charles Schumer defended GE, which bases its wind division in New York. "Any efforts that weaken intellectual property right protections relating to clean technology pose a substantial competitive risk to US businesses and workers," said Schumer. He led the charge to protect the US wind industry and jobs from federal stimulus funds being invested in the part foreign-owned turbine assembly plant in Texas to be co-owned by A-Power Energy Generation Systems of Shenyang, China.  Mitsubishi’s Arkansas plant could conceivably get manufacturing tax credits approved under the federal stimulus package.

Stephure also says that the ruling is crucial for other manufacturers interested in gaining market share in the US market, such as other world-class Asian manufacturers, Samsung, Daewoo and Hyundai. Manufacturers have previously had to buy GE’s wind rights or engineer around the GE-owned property, both of them expensive propositions.

GE has 60 days from January 8 to decide whether it will appeal the decision in a federal Court of Appeals in Washington DC. It is expected to do so if it believes the ITC has made a legal error in its decision. The appeals process could take 12 to 18 months.

Otherwise the spotlight will likely move to Texas, where GE filed a patent-infringement lawsuit in September 2009 against MHI and two of its subsidiaries in US District Court in Corpus Christi. The court is close to wind farms where the majority of MHI’s 2.4 turbines are operating. In the suit, GE is seeking royalties and damages, a remedy that cannot be offered by the ITC. The judge in the Texas suit had put that case on hold, pending the outcome of the ITC dispute.

Since a federal appeals court finding in Washington DC would be binding on the Texas court, whereas the ITC’s decision is not, GE may decide against appealing the ITC ruling, in case it loses, and instead place its bets on the Texas court.

The dispute over GE’s VS patent, issued to Kenetech Windpower in 1992, has been long and vicious in both the US and Europe. The VS patent will expire in 2011. But the 985 LVRT patent is especially valuable – it does not expire until 2023.