Any wind projects built off California will have to be floating, a still nascent technology. Not only that, the ocean depths are as much as four times greater than in any existing or near-term floating offshore project globally, pointed out Chelsea Jean-Michel, a wind analyst at BloombergNEF (BNEF).

The difficulty of designing, constructing and operating a wind project in the water depths off California is just not yet known, said Shashi Barla, head of renewables research at the Brinckmann Group.

“The costs will be very very high because of the water depths,” he added. Projects that come online off California in 2030, for example, would have a far higher risk than those that are commissioned in 2035 or 2040 because of the experience gained by then, Barla said.

California has a target of 2-5GW of offshore wind by 2030, but BNEF believes that only 100MW will have been installed by that date. The timelines of any projects that might be proposed by the five winning bidders is unclear, but the projects will not be commissioned before the 2030s, say analysts.

In the auction, on 6-7 December, the winners were: German utility RWE; companies owned by both Denmark-based Copenhagen Infrastructure Partners and by Ocean Winds, the latter a joint venture of EDP Renewables and France’s Engie; Norway’s oil and gas giant Equinor; and US independent renewables powerhouse Invenergy.

The depths off California’s Morro Bay on the central coast – where three tracts were auctioned with about 2.9GW of potential – are a minimum of 900-1,300 metres. The two in tracts auctioned off Humboldt in the far north of California – offering a possible 1.6GW in installed capacity – are at minimum 500-1,100 metres, said Jean-Michel. 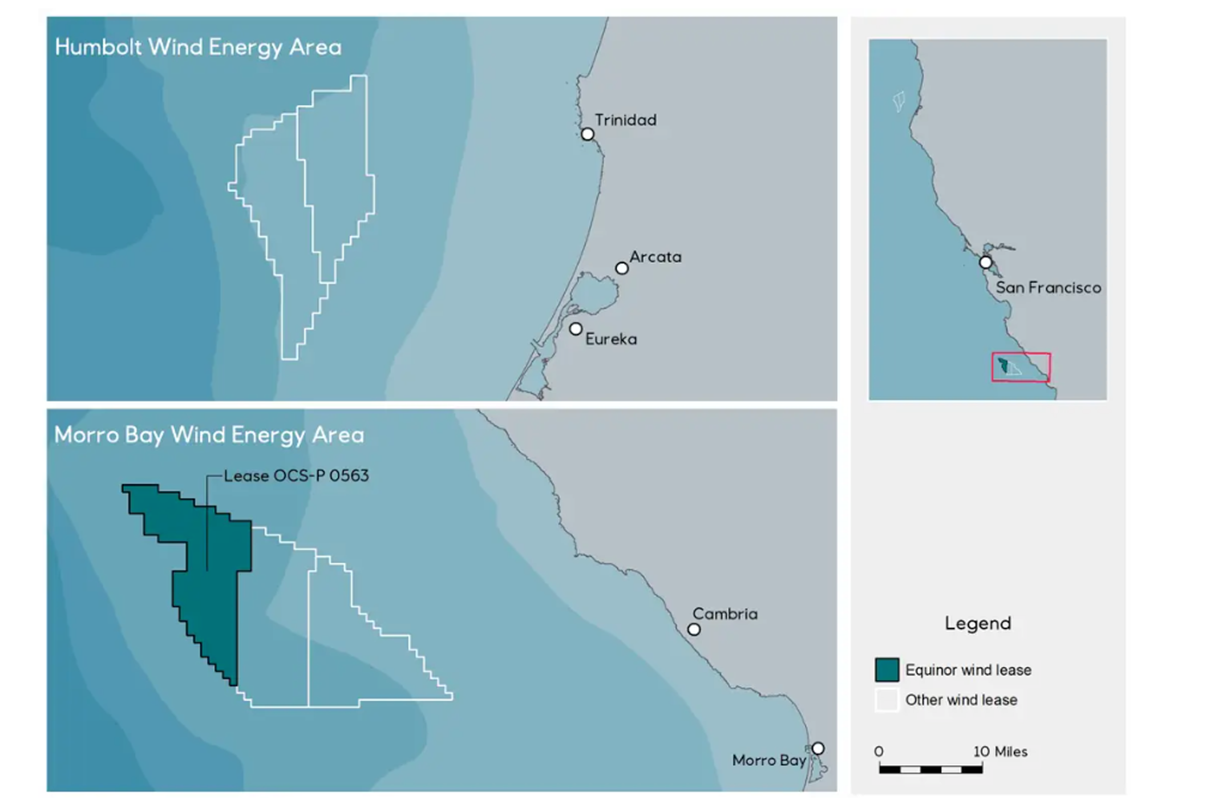 The auction was the first of the seabed off the US West Coast, where all projects will have to be floating. The next up for West Coast waters, an auction of tracts off Oregon, will be in the summer of 2024.

The average bid in the California auction was $49.72/km2, far below that of this year’s two offshore wind previous tenders off the Atlantic coast. The record-setting New York Bight sale in February saw prices of $219.92/km2, while Carolina Long Bay’s averaged $71.66/km2.

The New York Bight auction was considered a “perfect storm”, with shallow waters off New York and New Jersey, two heavily populated areas with transmission and which also happen to have the US’s most aggressive offshore wind targets that are legally binding.

The size of the winning bids in the California auction surprised some. Trade group Business Network for Offshore Wind, had publicly predicted that the winning bids could total $2.5 billion, a figure that turned out to be optimistic.

For his part, Barla said he was not surprised by the size of the bids, while Jean-Michel said she expected the winning bids to be a “little higher.”

Of the 43 companies that pre-qualified for the California tender, only seven were active bidders. Their names have not yet been released by the Bureau of Ocean Energy Management, which oversaw the event.

In the New York Bight auction, 15 out of 25 pre-qualified companies participated. New York Bight’s astronomical bid prices, higher than any US offshore energy auction ever, including oil and gas.

At issue for floating projects in deep water is the high cost of the length of the cables to tether the turbines to the seabed, the difficulty of “dynamic” array cables at such depths because the water pressure is greater, and that the cables must weather the currents, and the high cost of substations.

The auction may also have been overshadowed by general macroeconomic conditions – high inflation and supply chain bottlenecks. Some companies might have a higher appetite for risk, assuming that conditions might be better by the time they take a final investment decision. Others are less optimistic, said Jean-Michel, and may have bid less aggressively or not participated.

Another factor is that California’s offshore wind target is not legally binding, whereas the goals are firm in north-eastern states near where there have previously been offshore auctions, such as New York, New Jersey, Massachusetts, Rhode Island and Connecticut.

Offtakes will not be difficult to obtain, said Barla. Corporate buyers – such as Big Tech firms – will readily buy the clean energy if wind farms are developed, he said, citing west coast names such as Google, Apple, Facebook and Amazon. He noted that California is one of the largest economies in the world.

But there is a hurdle, pointed out Jean-Michel: “There’s no clear regulatory framework or procurement structure” for offshore wind in California.

She added that there is no intermediary for power purchase agreements, such as the New York State Research and Development Authority (Nyserda). Nor is there a structure for offshore wind renewable energy certificates, (Orecs), such as in New Jersey or Maryland.

Morro Bay may have well-developed transmission, because of the nearby 2.2GW Diablo Canyon nuclear power station. The plant is due to come offline in 2030. But Humboldt, about 436km north of the population centre of San Francisco and about 658km south of Portland in Oregon, has far less access.

The supply chain for offshore wind remains undeveloped, even on the US East Coast, where only 42MW of offshore wind has so far been built, all of it fixed-bottom. But projects in the region are steadily being announced.

California has no supply chain, as yet, though in the auction developers were able to increase the value of their bid by committing to training a local workforce or by factoring in “community benefits”.

A 20% credit was available for developers that committed money to support workforce training programmes for the floating offshore wind industry. This credit will result in more than $117 million in investments, the interior department said after the auction was concluded.

And a 10% credit was available if a developer signed a community benefit agreement – which is a legal agreement including commitments from the developer – with local communities, stakeholders such as ocean users or tribes.

Winning bidders have the sole right to develop a commercial wind project in the tract they competed for, but they are not obliged to develop them.