“The N175/6.X is not a greenfield design, but an evolutionary further development," says Till Junge, vice president, product strategy & sales support at Nordex, as he kicks off our interview reflecting on both past Delta4000 product milestones and the future. "A new-developed NR87.5 blade, boosting rotor size to 175 metres, is the new system element."

The prototype installation timeline for the new wind turbine is set at mid-2024, followed with pre-series production start during the fourth quarter of the year and series ramp-up in 2025, Junge adds.

The N175/6.X Delta4000 model is the latest 'evolutionary step' in design for the German/Spanish geared onshore turbine specialist in recent years. Indeed, the launch of the N175/6.X comes a year after Nordex presented the 6.XMW N163/6.X wind turbine, with 163m diameter. That variant is designed for land-constrained markets and medium wind speeds – Nordex installed two prototypes of the unit in the Netherlands in May.

Furthermore, just days before announcing the N163/6.X, the supplier completed the installation of the lower-rated 5.XMW N163/5.X prototype, with the same 163m rotor size. This model is for low and medium-wind conditions.

It was this N163/5.X milestone development which led to a successful global serial product, with more than 5.5GW of orders around the world for this model alone. Orders for the N163/6.X, take the combined N163/5.X and 6.X pipeline to more than 6GW. The N163/5.X, in fact, can be viewed as a conceptual blueprint for the company's latest N175/6.X design.

Once again, the N175/6.X is a product for the global market, optimised for low-and medium wind speeds. It fits seamlessly into the evolutionary Delta4000 product development strategy pursued by Nordex since the introduction of the N149/4.0-4.5 in 2017.

The expanding range is characterised by relatively modest incremental steps taken with each successor model variant. For the latest model, the NR87.5 blade - which is actually 85.7m in length but takes full rotor size to 175m when the nacelle is included - is currently the largest blade for an onshore turbine announced by a Western OEM.

The N175/6.X incorporates the extensively validated N163/6.X mechanical and electrical design basis tested in the lab and with the two prototypes installed in the Netherlands.

“Our key product-market considerations prior to N175/6.X product development start, and aimed at providing strategic inputs, were in essence two-fold," says Junge. "First, an analysis and evaluation of intelligence on current and likely future competitor offerings, translating these into a competitive product’s main specifications, especially rotor area and corresponding rating range. Second, the fact that significantly increasing production during low-wind conditions will not only enable more locations to become economically viable, it also results in higher spot-market value due to, usually, higher power prices during low-wind periods.” 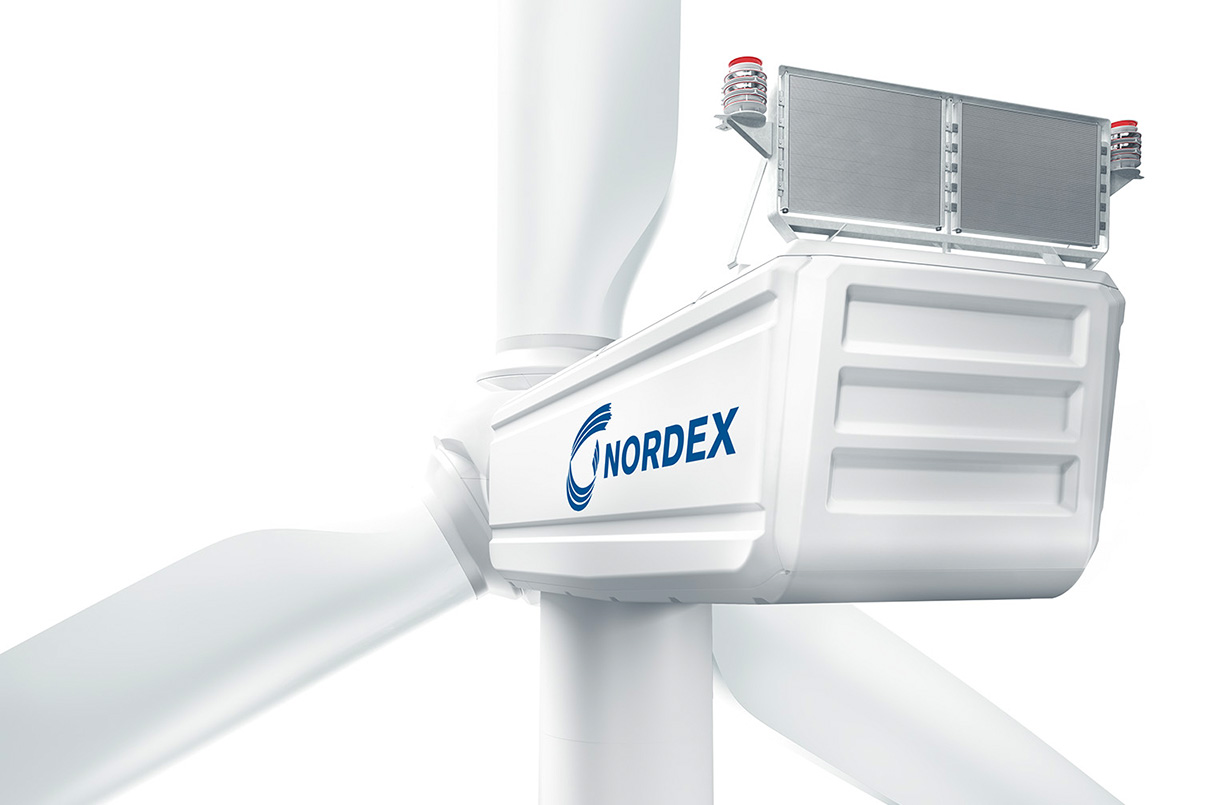 Nordex continues the flexible rating approach on the N175/6.X, depending on the site-specific requirements of each wind farm. The company has not revealed the maximum output the turbine could finally reach.

For the N163/6.X, a value of 311W/m2 is achieved in 6.5MW mode. Discussing this model, Junge says more and more countries, including beyond Europe, are now introducing land-constrained-type business case elements for onshore wind power. One such element, as a response to the current energy crisis, is to increase grid capacity for existing wind plans. The ability to then increase the turbine rating without changing the whole wind farm layout, by using new turbines, then boosts revenue for owners/operators, even if the actual AEP-increment itself is modest.

“Nordex, in anticipation of this trend, decided to offer the N163/6.X with a new highest 7.0MW power mode for specific market conditions where the increased rating positively contributes to local business cases. We do expect, for similar product-market reasons, to release further power modes for N175/6.X in future, but it is too early for communicating the exact rating range at this stage of the product development,” Junge says. 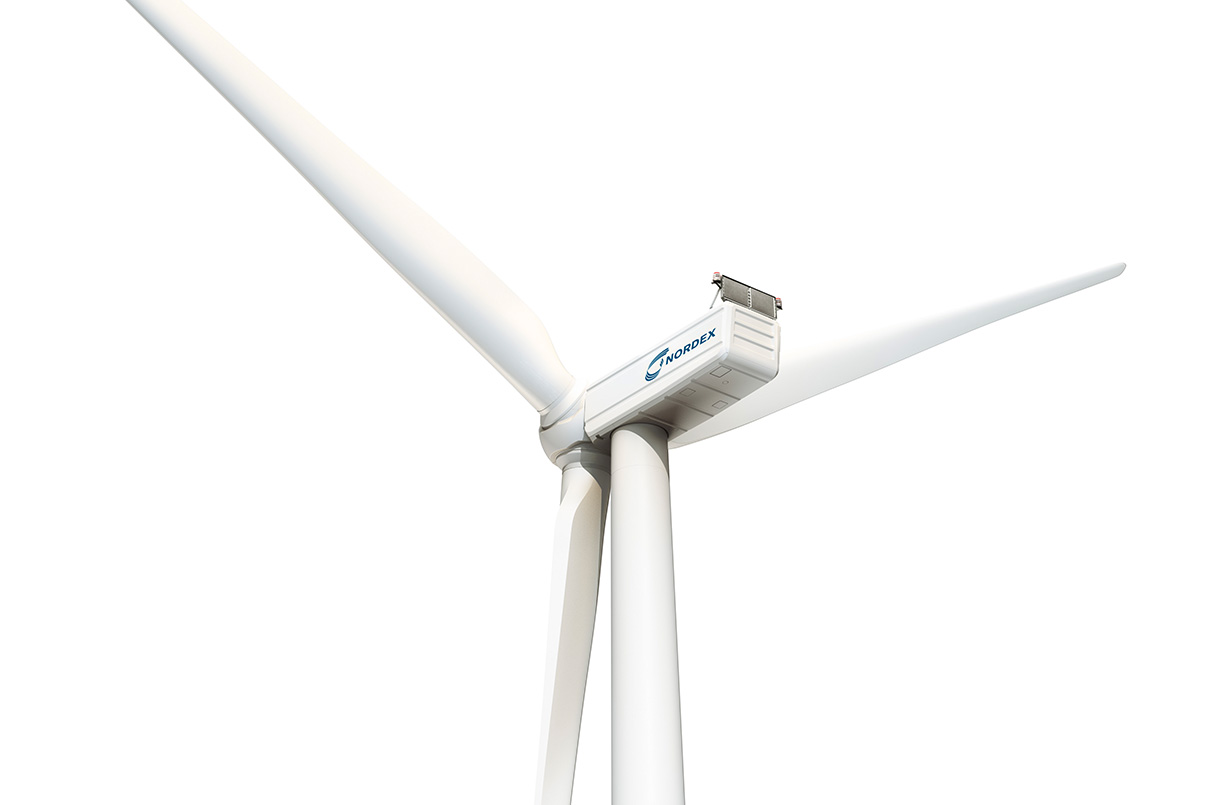 A key blade modularisation and standardisation feature of the N149 and N163 Delta4000 models is that they share a similar inner blade section, supplemented by separate outer blade sections with different length. The NR87.5 blade, on the other hand, is a completely new product development, again designed in-house.

The new blade is around 6m longer than the NR81.5 blades fitted on the N163 models. It retains the use of carbon fibres in the heaviest loaded structural girders or reinforcement elements. While expensive, the use of carbon is to curb blade deflection while retaining a lightweight blade design, Junge says.

He adds that main development focus areas for the NR87.5 blade were ‘easy to produce’ and ‘optimised aerodynamic efficiency in low and medium winds’. The blade has a wider chord and is not as slender as the N149 and N163 blades, a key benefit in providing extra internal space for structural reinforcements and it contributes further to counteracting blade deflections under load.

For the NR87.5 blades, Nordex again opted for single-piece blade technology, instead of segmented blade alternatives. The latter option would, according to Junge, have increased insurance risk and added blade mass and cost in parallel with negative overall impact on turbine mass and cost level too.

“Because N175/6.X is a global product, prior to new blade development start, we conducted comprehensive detailed infrastructural studies in our key wind markets, including mapping of main road infrastructures and potential bottlenecks. Our conclusions were that cost-effective road transportation is, in most main market circumstances, still doable and feasible, but deployment of special-purpose blade lifters might sometimes be needed earlier and more often.”

As initial demand for the N175/6.X is anticipated from key European markets; a mixed in-house and external built-to-print supply chain for blades, with a focus on deliveries to Europe, will come first. This will then be expanded into a global supply chain, he adds. 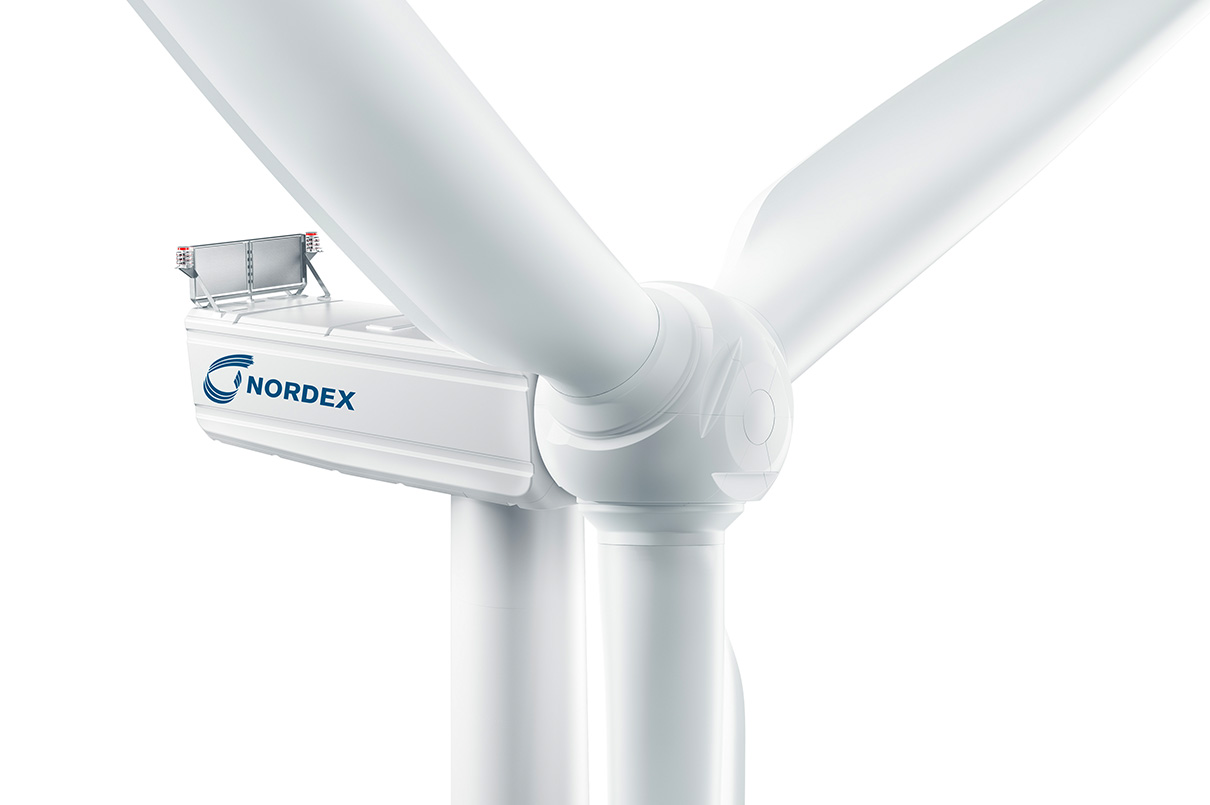 For transportability and serviceability reasons, all sister models share a largely unchanged mechanical high-speed geared layout, with common 3-point gearbox support, and similar nacelle dimensions. A difference, is that, due to the larger rotor turning slower on the N175/6.X compared to N163/6.X, the drivetrain had to be reinforced for compensating the higher bending moments.

The gearbox total gear-ratio also had to be increased to retain the same generator speeds. Again Nordex is using either a three-stage or four-stage design layout, thus with either two or three planetary stages. Both gearbox variants incorporate journal bearings, which have rapidly become a semi-standard wind industry application, as they allow more compact gearboxes with higher torque density. The latter offerings were, notes Junge, already available from the Delta4000 5.X gearboxes onward.

“Also strengthened is the N175/6.X hub to absorb the higher loads resulting from the bigger rotor with longer blades," he says. "We further retain the use of 4-point ball bearings in combination with load-based pitch control. This in turn is due to our focus on standardised solutions in larger volumes and other supply chain considerations, including the aim to reduce overall system and operational complexities."

He adds: "The N175/6.X will be certified for 25 years, with an option to extend lifetime up to 35 years depending on review of specific side conditions, and it has to be bankable.”

Prototype nacelle production and series ramp-up will initially be concentrated at Nordex facilities in Rostock, Germany.

While DFIGs remain a highly popular wind industry choice for high-speed geared drivetrains, their potential in meeting future grid compliance demands has been a hot recurring topic of debate for many years now. Junge says: “It is fact that there is an ongoing trend for turbine grid integration and grid compliance rules continue to be more stringent. Examples of individual wind markets with very demanding grid rules for wind power currently are Australia and Ireland/UK, and each for their own specific reasons. The electrical systems of all our turbine models, including N175/6.X, do meet even the most stringent grid demands and we are convinced this will continue in future.”

The company has not yet taken a final decision on whether this hybrid tower will be based on its new in-house design, an offering from German hybrid tower producer Max Bögl, or a mix, Junge concludes.