With its headquarters in Voerde, Germany, Winergy's geared offerings include gearboxes, generators and couplings for non-integrated high-speed drivetrains. It further broadened its role last year to become a full systems supplier of semi-integrated and fully-integrated medium-speed drive solutions.

In addition, it also supplies stator segments for direct drive onshore and offshore permanent magnet generators (PMGs), with over 40,000 units produced for outer-rotor generators in various ratings up to 15MW.

The company has proven skilled at keeping pace with the changing needs of the wind market. According to Edwin Hidding, Winergy's head of product and project management, and Andreas Jöckel, head of wind generator engineering and R&D, offshore wind is a key enabler for future wind power growth.

Offshore wind technology offers huge potential for large-scale projects, thanks to vast water masses and excellent high-wind resources, they note, highlighting a predicted 54% drop in levelised cost of energy (LCOE) by 2050 – based on a forecast by energy research and consultancy firm Wood Mackenzie – and shifting technology preferences.

“Wood Mackenzie predicts that two competing scaled up drivetrain architectures will dominate global offshore wind markets from 2030 onwards: medium-speed and direct drive," Hidding and Jöckel say. "Medium-speed thereby offers the most compact drivetrain concept in the market due to its comparatively higher torque density and high degree of functional integration. Direct drive [however] currently enjoys a number one position in the offshore segment regarding reliability and scalability whereby generator torque density (Nm/kg) is pushed to the limit.”

However, the two Winergy experts note that this ring-generator direct drive (DD) technology is also characterised by higher capital expenditure (CAPEX). This is largely due to its higher demand for supply-chain-critical rare earths for the magnets and larger quantities of other expensive materials such as copper and electric steel. DD demand for these is approximately 10 times more than medium-speed equivalents. Scaling of DD PMGs differs in multiple respects from geared – Winergy’s in-depth design experience in this regard and comprehensive manufacturing footprint with stator generator segments will be highlighted in a separate Windpower Monthly feature due to be published soon.

Hidding and Jöckel say another interesting Wood Mackenzie prediction is on the future of high-speed geared solutions in the offshore market. The consultancy estimates this segment will rapidly lose market share from ~18% this year and 15-20% next year to less than 5% in 2024. According to Wood Mackenzie, high-speed geared units will fully disappear from the offshore market in 2025.

“The key reason for this fast market decline is an already high complexity level at the current highest 6-8MW ratings with high-speed geared technology," explain Hidding and Jöckel. "This would increase further when scaled up to today’s highest 14-16MW ratings." 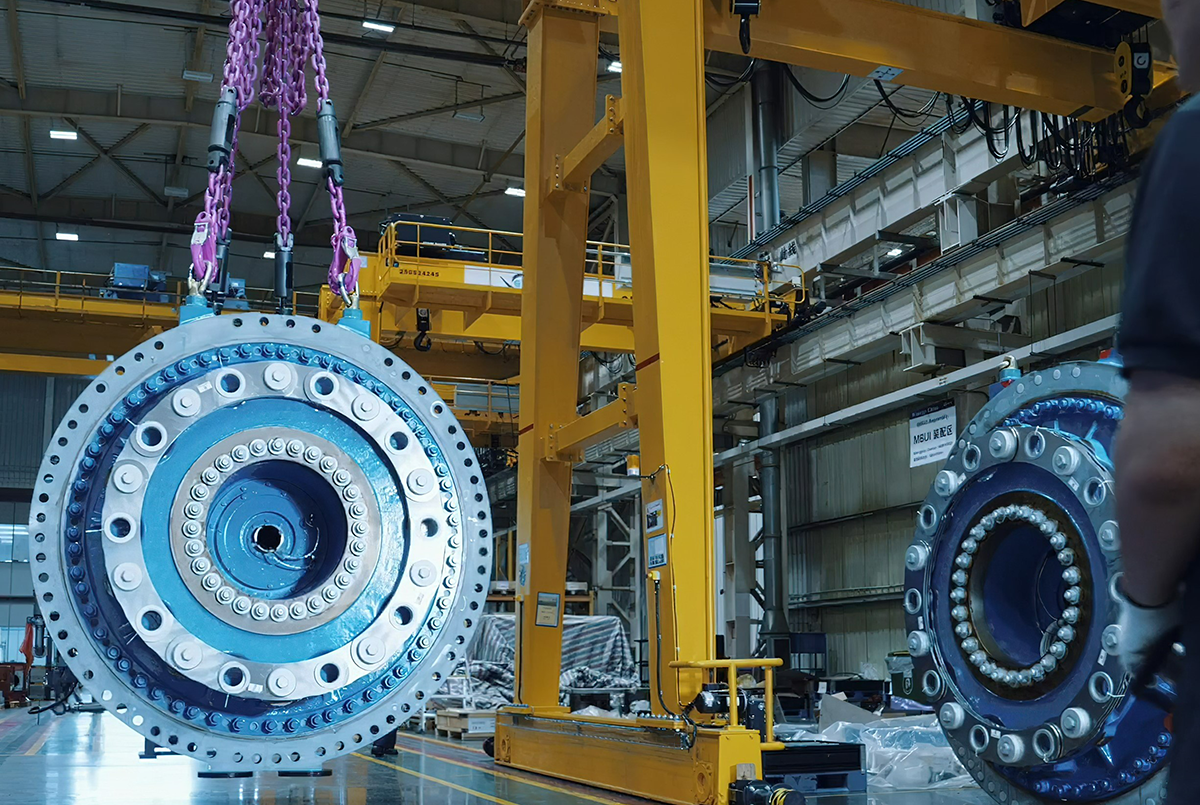 There are additional reliability concerns for high-speed bearings in gearboxes and generators, for example with brushes and/or rotor winding connections during on-going scaling with parallel doubly-fed induction generator (DFIG) deployment, they add. "Slipring brushes themselves are small, inexpensive DFIG-multi-physical components, but when exposed to temperature and speed cycles during operation, [they can] suffer from multi-physical low-cycle material fatigue, an infamous phenomenon.”

That in turn might cause premature failures and significant related revenue losses. This is a far more serious issue for offshore turbines because service access could be hampered during the high-wind season, especially when adverse high-wave and high-wind weather conditions are most common.

High-speed geared drive systems do generally have a slight investment cost advantage over medium-speed and direct drive, they say. However, this is not as relevant for offshore wind where around 70% of total investment is related to CAPEX, with the turbine itself accounting for roughly half or 35% of CAPEX.

This specific cost-split – and especially the high non-turbine cost share linked to infrastructure, transport-logistics and construction/installation along with operation and maintenance (OPEX) costs – clearly promotes larger offshore turbines requiring fewer foundations for a given wind farm size. Additional savings come from reduced in-field cable numbers plus substantial O&M benefits because a single 12MW turbine does not need twice the upkeep effort of 2x 6MW, they add. 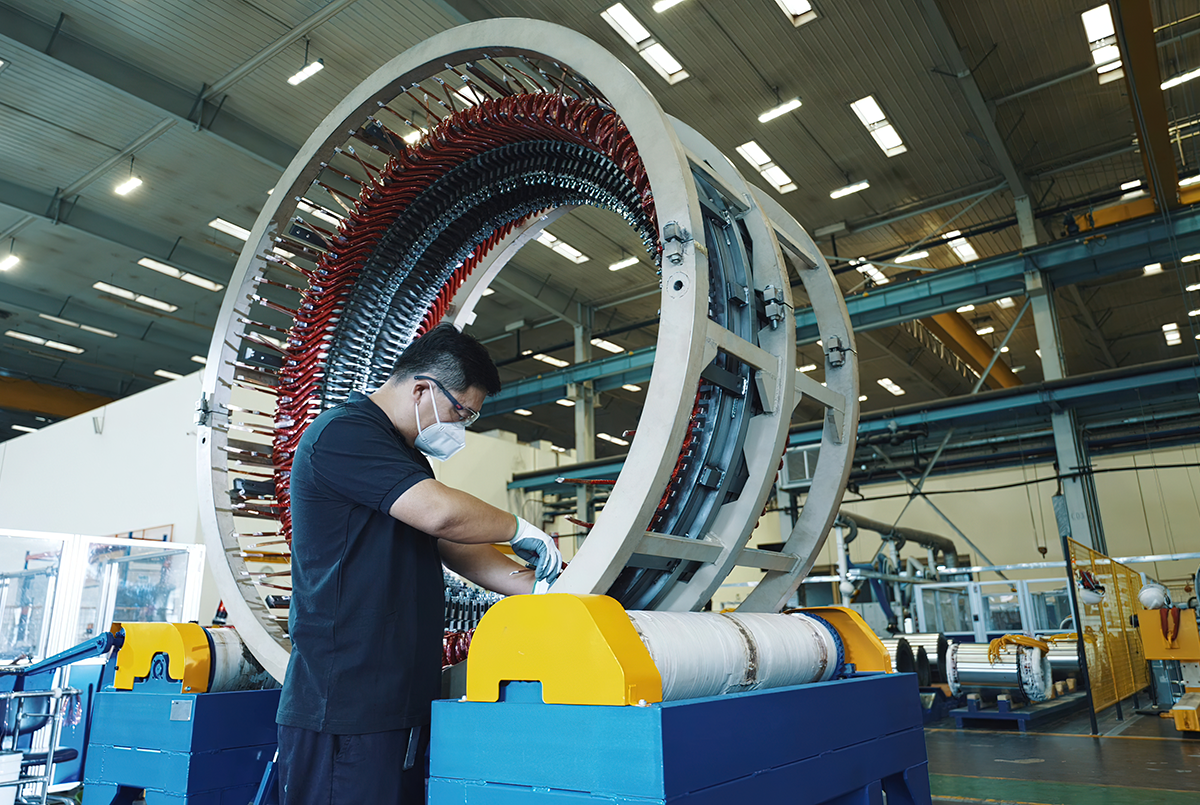 In a joint market outlook for offshore rotor torque increment, Winergy and Wood Mackenzie further predict an increase to an average of 30MNm rotor or gearbox input torque in 2030 versus about 7MNm this year.

The second biggest is the 18MW ThinkBig! 30 variant which features around 266m rotor diameter and has over 30MNm rotor torque.

“For all ThinkBig! calculations we used a rather conservative 90m/s rated tip speed, which today is considered modest because some latest offshore turbines introduced reach values of 100 – 104m/s," explains Hidding. "If tip speed in the above examples is increased by 15% from 90m/s to 103.5m/s, rated torque will go down by 15% as well, with positive impact at gearbox mass and cost. This can be reinforced further by increasing torque density [Nm/kg] in parallel.”

For offshore gearboxes, Winergy has already crossed the 200Nm/kg boundary, and a further 5% annual increment is envisaged. Another key value on the future of medium-speed offshore gearboxes is the maximum outer diameter (OD) of the low-speed input gear-stage ring gear as a function of rated power (MW). A graph depicting this relationship indicates a Ø4,000mm OD manufacturing limit, corresponding to 22-23MW for 90m/s rated tip speed and a further boost to 25-26MW with 15% higher tip speed.

Both Hidding and Jöckel are convinced about the future potential of medium-speed for onshore and offshore wind. Winergy became a medium-speed frontrunner when it introduced the 3MW semi-integrated HybridDrive concept in 2012, focused on the onshore market. This compact design, with flanged main components, allows individual up-tower component exchange, including the gearbox and generator. Where used, this also applies for a low-speed coupling too. 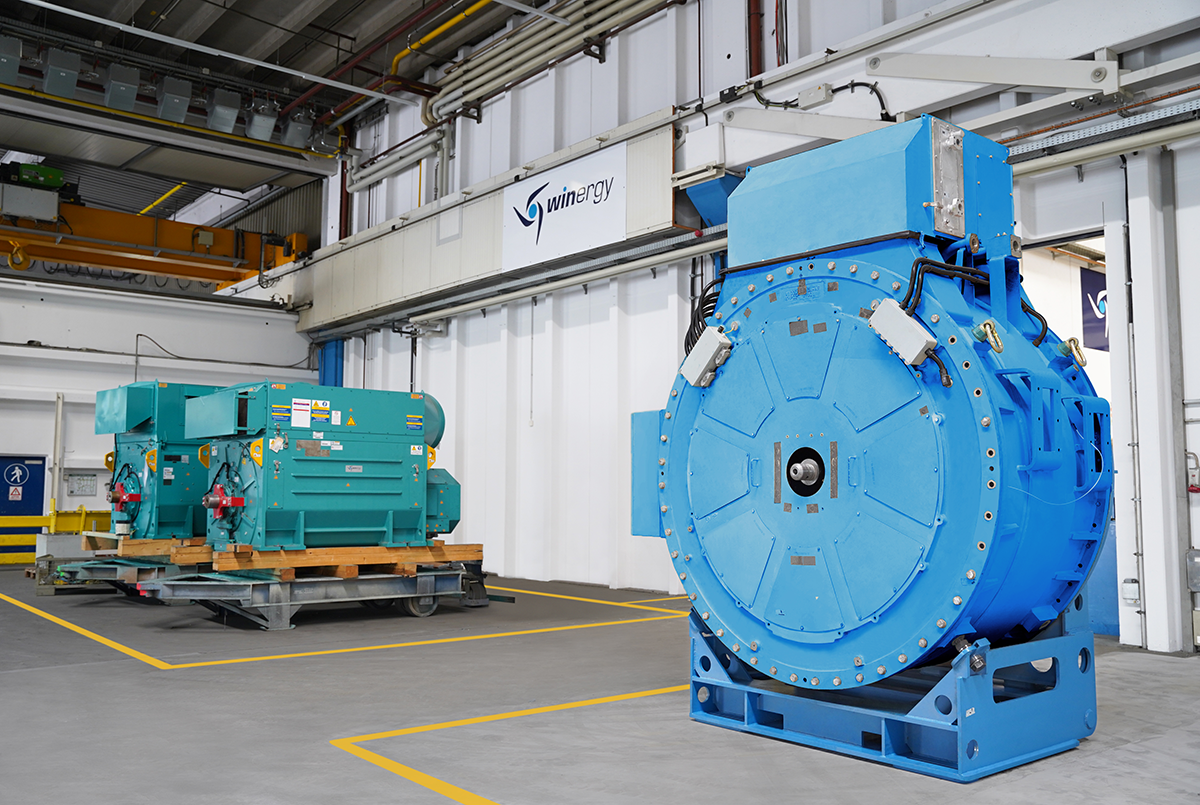 The Winergy experts describe fully integrated drivetrains as the major latest technology leap and ‘way to go’, with the Vestas EnVentus technology introduced in 2019 being a pioneering example. Full drivetrain integration involves shared functions between main components, for example through direct mounting of the generator-rotor at the gearbox output shaft, thereby eliminating the need for separate generator bearings.

“Such an overall solution offers the most compact and shortest drive system layout," explain Hidding and Jöckel. "Perhaps most important here is close cooperation with OEMs during system development for getting a full understanding of system integration through design, modelling and validation. Major challenges include a service concept allowing cost-effective up-tower main components exchange.”

According to the two Winergy experts, the oil-cooled PMG offers power and torque density levels far beyond conventionally cooled generators. It is therefore a "genuine gamechanger regarding reliability performance", says Jöckel, and combined with the gearbox offers the wind industry’s highest torque-density at full system level. 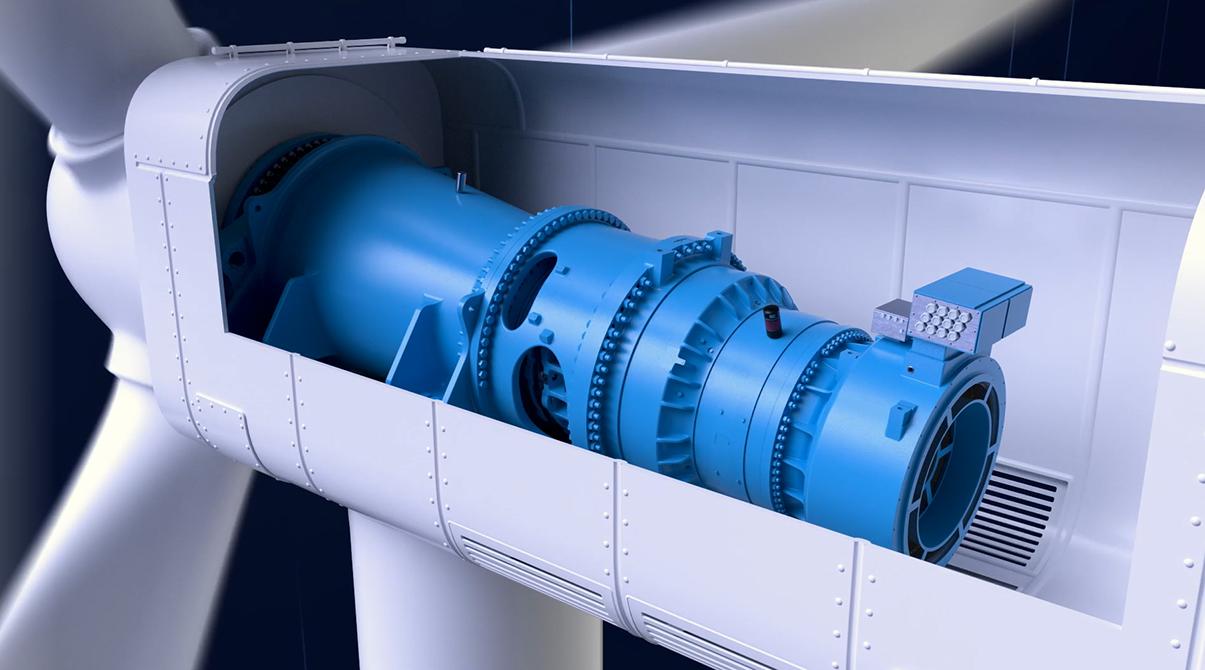 For onshore wind, the overall cost structure is quite different, with the turbine itself accounting for around 64% of total onshore investment cost, according to Wood Mackenzie. Here, for decades, high-speed geared drivetrains composed of non-integrated single main components have proven an evolutionary refined solution and a favoured choice with multiple leading OEMs.

“High-speed PMG’s do not play an onshore wind market role anymore, but we built about 1000 units in the past for a 2.5MW GE model. In 1996, Flender delivered its first DFIG for a 1.5MW Tacke Windtechnik (now GE) turbine, and we recently completed development of a 8MW DFIG for the upcoming 7-8MW onshore class," Hidding and Jöckel say. "The main cost-related DFIG benefit remains that it only requires a smaller and cheaper partial converter.”

Finally, based on Wood Mackenzie's forecast future onshore market figures, Winergy predicts that medium-speed will start overtaking high-speed geared in 2027. For the period 2028-2030, onshore market share for direct drive will, in fact, be less than 5%, they add. 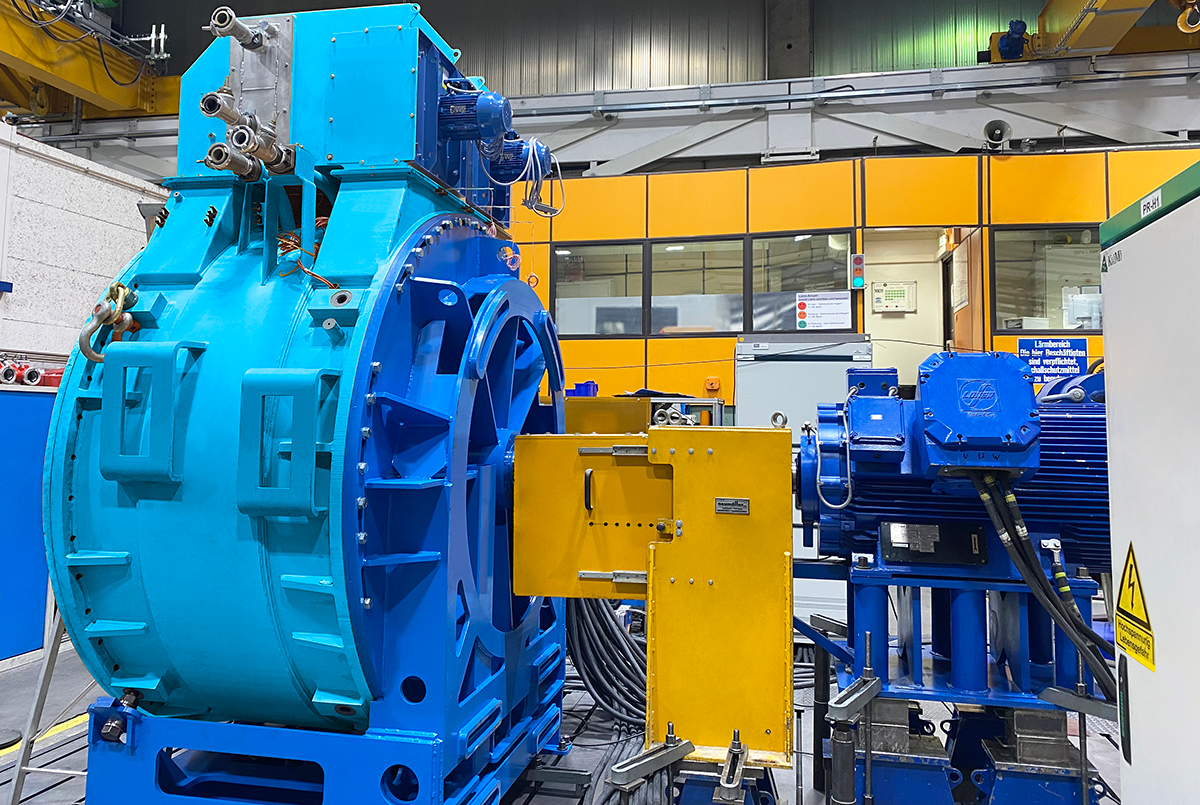 The company's main R&D centre in Germany for geared system generators and direct drive segments is in Voerde, with a second R&D centre in Ruhstorf. The latter has about 60 engineers and scientists dedicated to development, assembly and testing of new generator and full-drivetrain prototypes. An additional 5-6 R&D staff are based in Nürnberg and Berlin.