A professional body has called for a “step change” in the gender diversity of the UK energy sector after its annual report revealed that women occupy only 15% of executive director roles in the top 80 energy companies.

The figure represents a one percentage point increase on last year said report authors POWERful Women (PfW) - a professional initiative to increase gender diversity in the energy sector - and only halfway to its target of 30% by 2030.

The organisation described the energy sector’s progress on female representation at board level as “glacial”.

Its 2022 ‘State of the Nation’ report, compiled in collaboration with professional services firm PWC, showed that the number of top energy firms with no female executives had fallen by three percentage points, to 75%, since its last study.

Women occupied just over a quarter of all board seats, executive and non-executive, in the top 80 energy firms while the number of companies which achieved PfW’s 30% target for female executive directors dropped from 15 last year to 11 in 2022, the report said.

Of the top 80 energy firms in the full table, Windpower Monthly has extracted 17 which operate in the wind industry as well as the wider energy sector, shown below.

Of these, Shell, SSE, and the Renewables Infrastructure Group had the highest rate of female representation at board level, while Octopus Energy and Subsea7 scored lowest for gender diversity.

Commenting on the data, Katie Jackson, chair of PfW, said: “While we have seen a modest increase in the number of women on boards in the largest employers of the UK energy industry, which is to be welcomed, we are disappointed that the number of women in executive director roles has risen by just one per cent to only 15%, which is glacial progress.

She added: “On this, the sector is only half way – and barely on track – to our target of 30% by 2030. And it remains unacceptable that in 2022 three-quarters of the sector still has no female executive directors on their board. We require a step change on gender diversity in UK energy as we strive to reach net zero.”

Jackson said the energy sector could not continue to ignore the “vast pool of female talent” that was critical for the innovation, leadership and success of the sector during the energy transition to clean power. 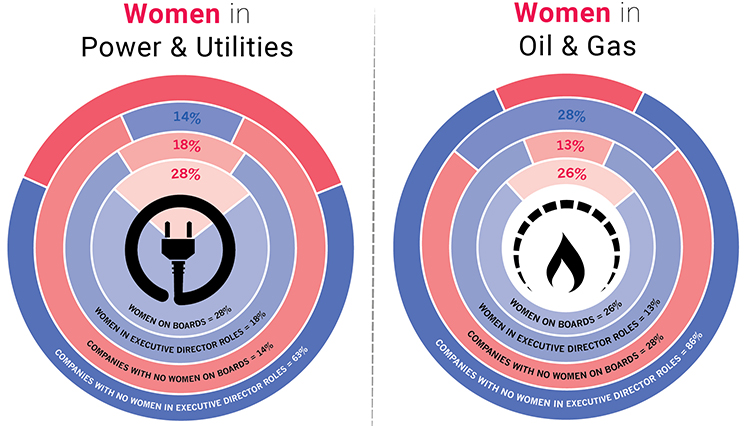 “This annual analysis holds the industry to account for its transparency and success in offering a secure and sustainable pipeline of female talent. While there are some encouraging signs in the data, it’s clear the industry still has a long way to go on diversity.”