Though clarity was provided on long-planned offshore wind expansion, including 5GW of floating offshore wind, the strategy was a disappointment for onshore wind and a lack of ambition for the under-utilised technology will ultimately lead to higher consumer energy bills.

The can was kicked down the road on onshore wind, with ambition limited to a consultation on improving community benefits for onshore wind supportive communities by the end of 2022. The omission of clear targets for deployment and scale as well as an idea of how to judge ‘supportive’ communities appears to have been a conscious political intervention – evidenced by reports that Secretary of State for Energy, Kwasi Kwarteng, was up for announcing a doubling of the onshore wind target, only for this to be revised down to at least a year’s consultation ahead following news of Conservative MP opposition.

This is a miscalculation about public opinion and the strength of feeling on bills. Action needs to be taken to reduce bills today, the cost of onshore wind per MWh is less than half that of MWh electricity from the nuclear generation provided by Hinkley Point. Though widely accepted, the evidence of the impressive fall down the cost curve seen in Europe has been missing from UK deployment because of the effective moratorium on onshore wind since 2016.

According to Energy UK there’s 5.8GW of onshore wind capacity, in the UK and though in some cases, deployment could be constrained by grid connections it would be significantly quicker to bring online than the government’s projected time frame for its new nuclear reactors (up to 8 approved by 2030, with the aim of constructed and running by 2050).

This political reaction undermines government rhetoric on the cost of living crisis, and reflects an incredible bias against one technology. This is particularly stark when you examine the evidence of opposition to onshore wind that is used as a reason to an effective moratorium.

The below graphs from the government’s public attitudes tracker show 80% support for onshore wind, compared to just 37% for nuclear. It’s particularly at odds with the fortunes of fracking, which though had a popularity rating of just 17% support in Autumn 2021, saw the energy security strategy launch a new impartial report into the relationship between shale gas extraction and seismic activity. 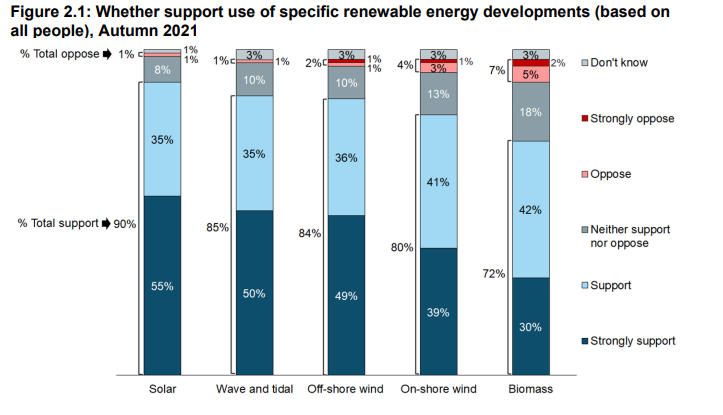 The changing fortunes of these technologies when considered against deployment time, public support, and cost make clear that the mood music is being set by the view of a selection of prominent Conservative MPs. The anti-onshore wind letter that prompted the initial moratorium on onshore wind was backed by a group of MPs, many who now hold ministerial positions.

Though Chris Heaton-Harris has made no comment on his conversations about onshore wind and the energy strategy, he previously orchestrated the anti-onshore wind letter and is now Chief Whip. Though this anti-wind sentiment across a group of vocal conservative MPs is prominent, it overshadows the growing prominence and strength of pro-environment and pro-renewable conservative advocates, like the 130 MP-strong group the Conservative Environment Network, and the work of groups that feature pro-renewable, Conservative advocates like the APPG for Environment, PRASEG and Peers4Planet.

The onshore wind industry will undoubtedly be ready and raring to outline its enthusiasm to support local communities wishing to host sites. Leading actors in the sector were highlighting the role local electricity discount schemes could play back in 2016, and new modes of community ownership are examples of where the sector has long thought about its relationship with local communities.

However, this should be a technology featuring more prominently in a conversation about energy security. It’s cheap and in many cases ready to deploy. Boris Johnson recently said the government will do “everything [it] can to help people with energy price spikes” but in terms of energy generation deployment, that simply isn’t the case. Coupled with the muted interventions to support households to adopt energy efficiency, this amounts to a political gamble that anti-onshore wind sentiment trumps concern about the cost-of-living crisis.

With even the Conservative benches divided on whether that’s the right thing to do, delaying onshore wind is likely a decision that will come back to bite.