Global wind power installations must quadruple by the end of the decade to avoid missing net zero and energy security goals and a major overhaul to market frameworks required for success, according to a report by the Global Wind Energy Council (GWEC).

While several regional wind markets had a record year for new onshore installations in 2021, as did offshore wind globally, GWEC said this "isn't enough to stay on course for 1.5°C and net zero by 2050", in its Global Wind Report 2022.

GWEC's report shows Europe, Latin America, Africa and the Middle East all had record years for new onshore installations, up 19%, 27% and 120% respectively.

Offshore, China drove the industry's "mammoth year". Globally, 21.1GW was commissioned offshore in 2021, a three-fold increase on 2020's figures. China accounted for 80% of the growth, helping it overtake the UK as the world's largest offshore wind market in terms of cumulative capacity installed.

The impact of Covid-19 was clear, with a slowdown in project commissioning in markets such as the US, India and Taiwan. But auctioned capacity was up 153% compared to 2020, with 88GW awarded globally. Onshore wind accounted for more than three quarters, or 69GW, while offshore accounted for 19GW.

However, wind energy is not growing nearly fast or widely enough to "realise a secure and resilient" global energy transition. GWEC Market Intelligence forecasts that by 2030 there will be less than two-thirds of the wind energy capacity required for a 1.5°C and net zero pathway, "effectively condemning us to miss our climate goals" (see below). The industry body called for greater political action to ensure that does not happen. 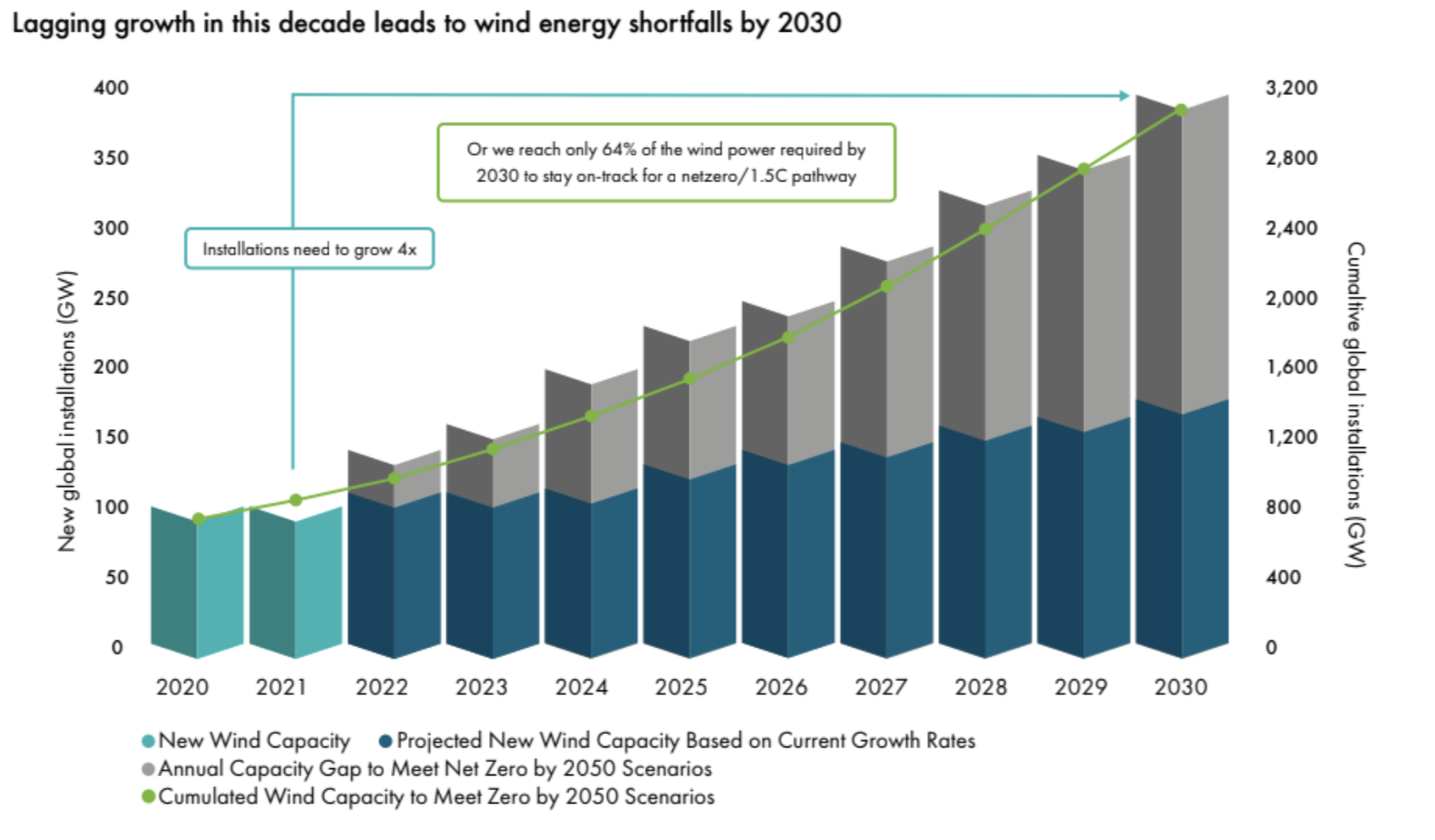 “Scaling up growth to the level required to reach Net Zero and achieve energy security will require a new, more proactive approach to policy making around the world," said Ben Backwell, CEO of GWEC.

“Decisively addressing issues such as permitting and planning will unlock economic growth and create millions of jobs by letting investment flow, while allowing rapid progress on our climate goals. If we carry on with 'business as usual', however, we will miss this unique window of opportunity."

Backwell said the events of the last year – which has seen economies and consumers around the world exposed to extreme fossil fuel volatility and high prices – are "a symptom of a hesitant and disorderly energy transition". Russia’s invasion of Ukraine also exposed the implications of dependency on fossil fuel imports for energy security, he added.

“The last 12 months should serve as a huge wake-up call that we need to move decisively forward and switch to 21st century energy systems based on renewables.”

The wind industry faces "higher costs amid perverse market design", the GWEC report notes. Policymakers must re-evaluate markets to align with economic and social objectives. Red tape needs to be cut, with procedures to grant permits, including land allocation and grid connection, streamlined to ensure projects are no longer 'stuck in the pipeline', it adds.

GWEC also called for greater public-private cooperation to confront what it calls the new geopolitics of the wind supply chain. It wants to see a stronger international regulatory framework to address the increased competition for commodities and critical minerals.

The industry body called for "the demise of baseload". GWEC said flexibility will be the chief currency of a renewables-led system and "policymakers must send signals to the market that they will invest in the tools for this".  In addition, there must be "unprecedented grid investment" to keep pace with renewables. The report said investment in grids must treble from current levels through to 2030 and workforce planning for large-scale renewables deployment should be an early policy priority.