Shares in wind energy companies - including Nordex, Orsted, Vestas and SGRE - rose sharply last week. This was largely in response to clear signals from policy makers about the need to accelerate the transition to renewables and decrease reliance on Russian fossil fuels, in the wake of the invasion of Ukraine.

Although share prices in wind companies have already begun to fall back, they are still well above levels seen in mid-February.

Shares in Siemens Gamesa were 17.5 euros on 15 February, before rising sharply to almost 21 euros on 28 February. Although the price has started to fall back since last week, shares in SGRE are currently 19.5 euros, as of Tuesday.

Meanwhile, shares in Vestas have continued to rise since the start of the war. Shares were priced at 175 DKK (Danish krone) on 15 February and rose by nearly a quarter to 217 DKK on 28 February but, after a brief fall, they rose even higher to almost 234 DKK on Tuesday.

The story is similar with Nordex and Orsted, whose stocks have both continued to rise, with some fluctuations, since the end of February.

Commenting on the share price changes, Shashi Barla, global head of wind supply chain and technology for Wood Mackenzie’s power & renewables division, said: “Wind stocks have risen dramatically and, while some of them have levelled off, they're still at higher price points compared to about two weeks ago.”

One effect of Russia’s attack on Ukraine is that it has sharpened the minds of policy makers, in the EU and beyond, to move towards a swifter transition to renewable energy than was previously envisaged.

With Europe importing roughly a third of its total gas supply from Russia, the transition to renewables is no longer just about averting the slow-moving crisis of climate change but rather about achieving energy security in the shorter term too.

Speaking last week, EU president Ursula von der Leyen (below) said: “It is our switch to renewables…that will make us truly independent. We have to accelerate the green transition. This is a watershed moment for our union. We cannot take our security and the protection of people for granted. We have to stand up for it. We have to invest in it.” 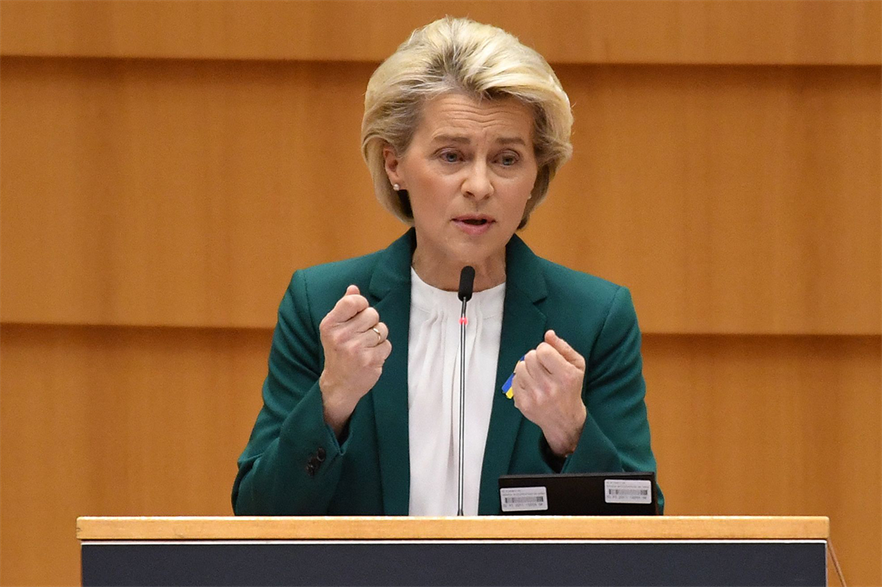 As a result of the war, oil prices are currently at a 14-year high, which raises the spectre of energy insecurity for businesses and their logistics operations, as well as for millions of households.

Russia has threatened to cut off gas supplies to Germany last night as the EU considered banning its oil imports.

With Russia the second largest exporter of oil globally, Barla argues that investor optimism towards wind stocks stems from the rocketing price of the commodity and the sectors which are reliant on it.

He said: “Countries are trying to cut ties with Russia and they have to plug the gap from somewhere else but there is a shortfall and that is clearly evident.”

Barla added: “One of the best options for investors to mitigate this is to look at these stocks, so it reinforces the theory that we have to move to clean and green economies going forward.”

This show of faith from investors is not just directed at ‘pure play’ wind firms; it is also creating a halo-effect for related companies such as those working in turbine maintenance and energy storage - as well as the whole renewables sector.

“The stocks for companies that manufacture peripheral and auxiliary equipment to the wind and solar battery storage are also likely to increase,” said Barla.

But the question for the wind industry is whether the resurgence in investor confidence will be short-lived.

This largely depends on how long the crisis in Ukraine lasts and whether or not it escalates.

Barla said: “We don’t want this to happen but if this becomes a downward spiral and the crisis is extended then, probably, the price points on renewable stocks will continue to remain at current levels, but if the situation is resolved, I would expect to see stocks lose these price points.”

He added: “Investors are always looking at the short term. More often than not, they will react to short-term fluctuations. Needless to say [the war] only strengthens people’s views on renewable stocks and it is one of the great picks for investors going forward.”

Whether or not the war in Ukraine is resolved swiftly, Barla argues that the long-term fundamentals for the wind industry are good and that the strong signals coming from policy makers as a result of it will strengthen investors’ views of stocks in renewables.

Investor confidence, based on strong policy signals, is good news for the wind industry but Barla warned there will also be short-term adversity for the industry.

He said: “This is not just because of the war - which is definitely not a good thing at all - but if inflation rises and economies are struggling, then input costs will automatically increase for renewable companies.”

Inflationary pressures on the cost of raw materials and logistics have already hit wind companies hard and eaten into their profits, as evidenced by their financial results earlier this year. And the problem could get a lot worse.

Barla said: “If these costs are still high, and this is eating into companies’ profits, by the time we see Q2 results, then inevitably investors will be wary and that will result in a plummeting of the share prices of these stocks.”