The expansion of wind power in Europe is too slow to meet the EU’s climate and energy targets and this slow pace is damaging the supply chain, industry body WindEurope warned.

Only 11GW of new wind capacity was installed in the EU last year, bringing the cumulative capacity to 189GW (173GW onshore and 16GW offshore) by the end of the year, according to the industry body’s annual statistics and outlook report.

Meanwhile, Europe as a whole added 17.4GW of new wind farms in 2021, bringing the cumulative installed capacity to 236GW (207GW onshore, 28GW offshore) by the end of the year.

This was a record year for installations, surpassing the 17.1GW added in 2017, but is still well below the level that Europe needs to reach its 2030 energy targets and climate goals, WindEurope warned.

WindEurope counts individual turbines connected to the grid, rather than only fully commissioned projects.

The vast majority (81%, 14,041MW) of the newly installed wind capacity in Europe was onshore wind, according to WindEurope figures. 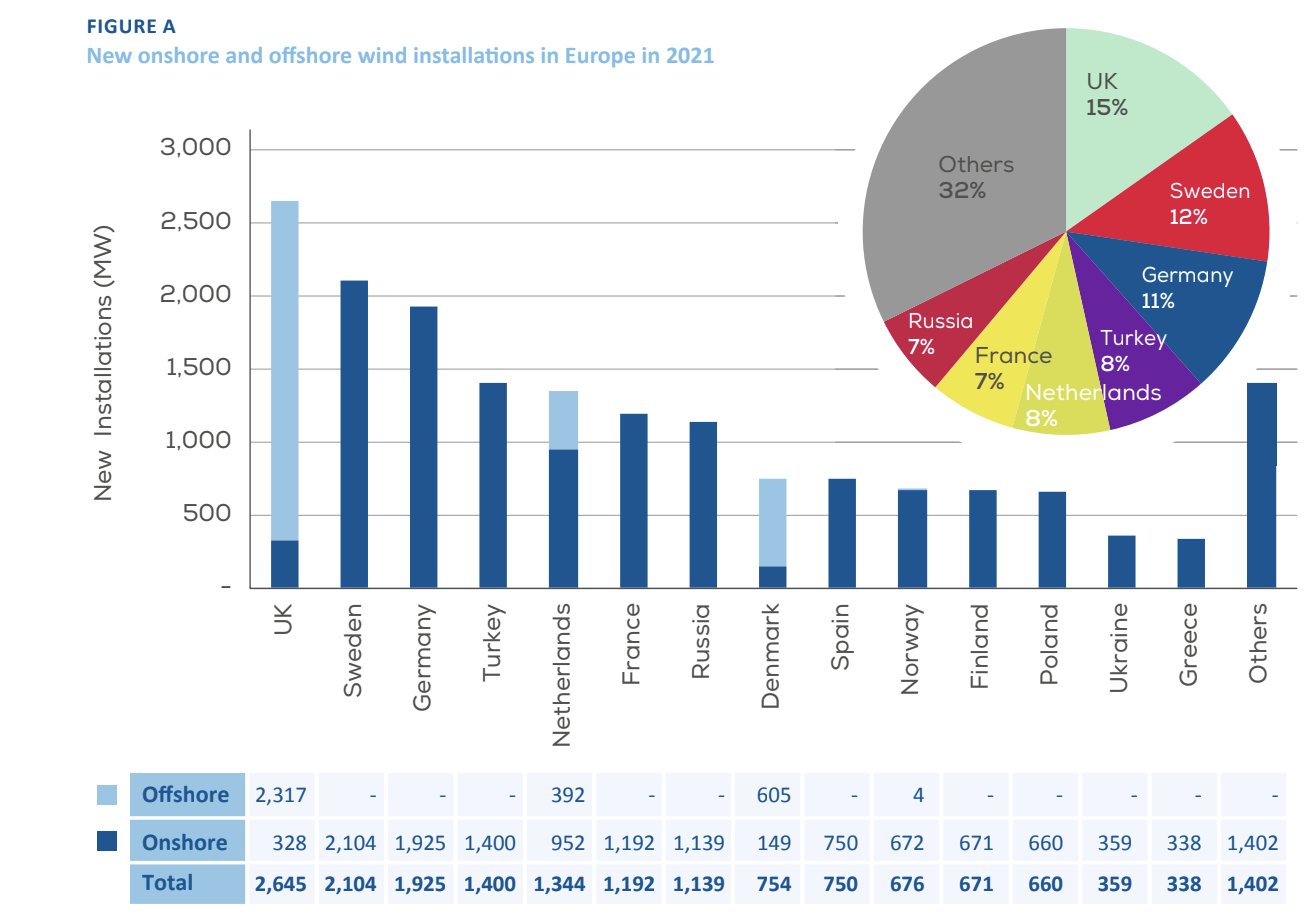 Wind developers secured 12.4GW (10.4GW onshore, 2GW offshore) of new capacity through auctions in seven countries last year. This figure is higher than the 8GW awarded in 2020, but below the 15GW allocated in 2019.

However, wind only secured half of the available volumes in 2021, with WindEurope citing slow permitting processes reducing the number of wind farms eligible to compete and strong competition against solar PV in technology-neutral tenders as the main reasons.

Permitting remains the largest bottleneck to European wind power expansion, with countries not granting permits for enough wind farms, WindEurope explained. This is because permitting rules and procedures are too complex and permitting authorities are not always adequately staffed, it added.

Hardly any EU member states meet the deadlines for permitting procedures required under the EU Renewable Energy Directive. Under existing EU regulations, new wind farms should be permitted within two years, while repowered projects should be processed within one year, although this can be extended in some circumstances.

Member states currently aim for this timeline voluntarily, but the EU is expected to include measures for stricter enforcement of this schedule when it updates its regulations on permitting early next year, a WindEurope spokesman advised.

WindEurope CEO Giles Dickson said: “The EU needs to build 30GW of new wind a year. But it built only 11GW last year and is set to build only 18GW a year over the next five years. These low volumes undermine the Green Deal. And they’re hurting Europe’s wind energy supply chain.”

Dickson also co-signed a letter with the CEOs of turbine makers Enercon, Nordex, GE, Siemens Gamesa and Vestas to European Commission president Ursula von der Leyen highlighting the “poor health” of the European wind industry. In the letter, the industry leaders wrote about how the sector is also struggling with higher prices for steel and other commodities and disrupted international supply chains.