A subsequent investigation by the company, which involved an independent engineering assessment, has determined that all 50 turbine foundations at the Kent Hills 1 and 2 sites in eastern Canada must now be replaced.

TransAlta said “deficiencies” in the original design of the foundations had caused cracks and they must now be replaced, with the work expected to take until the end of 2023 to complete.

The company stressed that the foundations at Kent Hills 1 and 2 are “unique to the design of those sites” and that there was no indication of similar problems at its sister facility, 17.25MW Kent Hills 3 Kent Hills 3 (17.25MW) OnshoreElgin, New Brunswick, Canada, North America Click to see full details, or any of its other sites.

The wind turbines will cease to operate for safety reasons while the foundations are replaced, at the recommendation of independent engineers.

Replacement of the foundations is expected to cost C$75-100 million (US$59-79 million) and TransAlta expects to lose C$3.4 million in revenue, per month, while all 50 of its turbines are offline.

However, the company expects to return to generating revenue as the wind turbines are individually returned to service once their foundations have been replaced.

In October, a turbine at the Kent Hills 2 wind site collapsed and fell across an access road (see below). 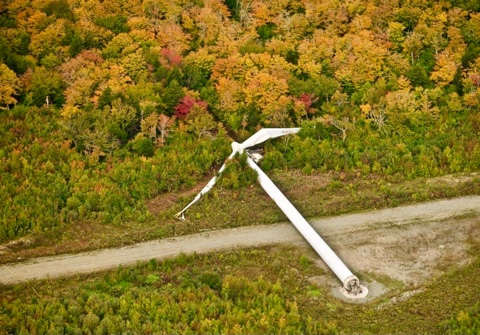 Local media said the access roads around the remote site were frequently used by dirt bike riders but that nobody was injured during the incident.

Todd Stack, president of TransAlta Renewables, said: “We remain focused on our objective to safely return the site to service as soon as reasonably practicable.

He added: “As a result of the site remaining down for an extended period during remediation, we also continue to work closely with our project lenders and look forward to being able to resume delivery of renewable electricity as the foundation replacements are complete.”