It signed a memorandum of understanding (MoU) to work together with the UK department for international trade (DIT) regarding investment into the UK’s offshore wind sector.

The UK currently has no Chinese turbines operating in its waters, and no Chinese OEMs have a manufacturing footprint in the UK.

Neither party has confirmed how much MingYang would invest, whether there would be any other investors, the location of any potential factories, or when they might be built.

MingYang is interested in using UK-produced components and UK-based services, it added.

The agreement is the latest in a series of moves made by MingYang into European offshore wind. Its turbines are being installed at the 30MW Beleolico Beleolico (30MW) Offshoreoff Taranto, Apulia, Italy, Europe Click to see full details wind farm off southern Italy, its only publicly announced offshore wind turbine order in Europe.

It has also set up a business and engineering centre in Hamburg, Germany and is reportedly planning a wind turbine plant in southern Germany.

2022: Windpower Monthly's review of the year

Windpower Monthly's editorial team is now on leave for the Christmas break. We will be back on 3 January, but in the meantime, read our review of the year and a selection of our features and analysis from 2022.

Since 2016, Taiwan has pursued the energy transition with the aim of increasing renewable energy to 20% of all power generation by 2025.

Work is progressing on a full-scale 16.6MW Nezzy² prototype with two 180-metre downwind rotors, to be installed in southern China in the coming months

Japanese conglomerate Marubeni has commissioned the country’s first large-scale offshore wind farms, bringing online more than 140MW of capacity off the north-east coast of its main island of Honshu.

UAE government-owned renewables developer Masdar has announced new plans for a 1GW wind farm in Kazakhstan and firmed up its aim to deploy 10GW of wind and solar PV in Azerbaijan across a series of new agreements.

The Indian government has bowed to industry demands to reform its bidding process as part of an announcement to auction 8GW of wind power projects per year until 2030.

MingYang Smart Energy has launched an 18MW offshore wind turbine with a 280-metre-plus rotor diameter. Its power rating is on par with the most powerful designs unveiled to date, while its rotor is beyond the sizes offered by MingYang’s competitors. 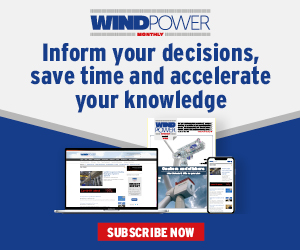