This is a feature from Windpower Monthly's October 2021 issue. Click here to read the full edition

Industries with strong energy demand and hard-to-abate emissions, such as chemicals, cement and steel, are looking to green power purchase agreements (PPAs) as part of a strategy for decarbonisation. The first major offtake agreements for green hydrogen — which is seen playing a role in the decarbonisation of these industries when electrification is not feasible — have also been announced.

As it eyes a net-zero target for 2050, chemicals giant BASF is among those that have been busy lining up deals to purchase green power, as well as directly investing in renewable assets. In May, Germany-based developer RWE revealed plans to build a 2GW offshore wind farm in the North Sea to provide BASF and other industrial companies with electricity and green hydrogen. BASF plans to use electricity from the facility to power electric steam-cracker furnaces to produce chemicals and power heat pumps at its plant in Ludwigshafen (pictured) in the German inland state of Rhineland-Palatinate. 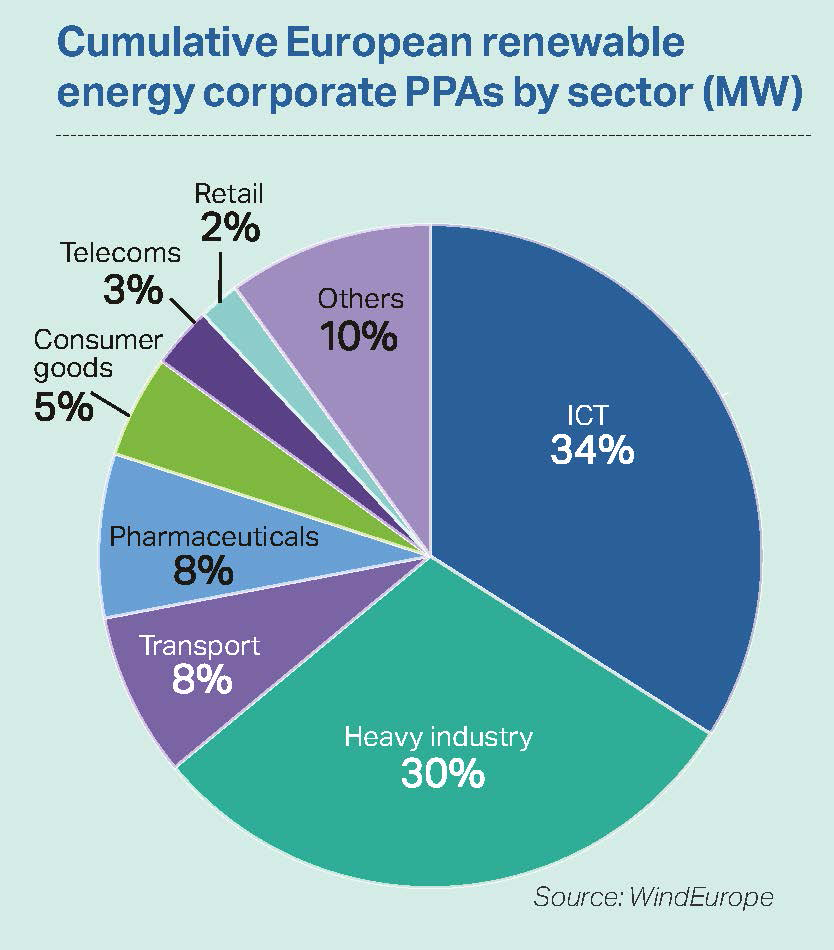 BASF is working with fellow chemicals firms Linde and Sabic, a unit of the Saudi oil and gas group Saudi Aramco, to develop solutions for electrically heated steam-cracker furnaces that would run on renewable power rather than the fossil-fuel gas currently used for the heating process.

RWE hopes to complete its North Sea project by 2030 and intends to use 20% of output from the facility to power a 300MW electrolyser to supply BASF, and potentially other industrial customers, with green hydrogen. Meeting the 2030 target date is conditional on offshore wind tenders that envisage projects being commissioned before 2030 and an appropriate regulatory framework for green hydrogen production.

BASF in June also announced it had bought a 49.5% stake in Vattenfall's subsidy-free 1500MW Hollandse Kust Zuid Hollandse Kust Zuid (1500MW) OffshoreNetherlands, Europe Click to see full details wind farm in the Dutch North Sea, from which it will buy electricity through a PPA. Construction has started, with commissioning due in 2023.

In late November, BASF signed a 25-year PPA with Engie, effective as of 1 January 2022, under which Engie will supply several BASF sites in Europe with a total of up to 20.7TWh of renewable electricity throughout the term of the agreement. The utility will initially source the power from some of its existing onshore wind farms in Spain, but may extend this to future onshore and offshore projects.

Luxembourg-based steel producer ArcelorMittal recently signed a 20-year PPA with developer Storm Power to buy electricity from an 18MW wind farm Storm is constructing on the steel manufacturer's production site in Ghent. The wind farm will be the first free of subsidies in Belgium.

In the US, hydrogen fuel cell provider Plug Power this July signed a 345MW wind PPA with developer Apex Power to directly supply a new hydrogen production plant with electricity from a wind farm being built in Texas. The latter is expected online by 2023, as is the plant that will produce more than 30 tonnes a day of green liquid hydrogen for industry and transport, enough to fuel the equivalent of over 2,000 light commercial vehicles or 1,000 heavy-duty trucks.