South Africa is the number one wind power market in the Africa and Middle East region, with 2.5GW of cumulative installed capacity. Last year, it was also the top regional market for new annual installations, adding 515MW of new wind-power capacity, despite the lockdowns and uncertainties caused by Covid-19.

In 2019, South Africa announced plans to award contracts for 14.4GW of new wind-power capacity due to be installed between 2022 and 2030 — more than any other energy source in this period. The measures were designed to ensure annual installations of 1.6GW between 2022 and 2030.

The plans fall under the country’s latest integrated resource plan (IRP), the roadmap for the energy sector, which has been regularly updated since its first edition in 2011.

The IRP is one of a series of policies developed by the South African government in the past decade to spur the growth of renewable energy, and its transition away from fossil-fuelled power generation. Its national development plan commits to 30GW of renewable energy by 2030, while other policies promote job creation and local content supply.

But its flagship energy programme has been the renewable energy independent power producer procurement programme (REIPPPP). This was introduced following recognition by the Department for Energy, National Treasury and the Development Bank of Southern Africa that an earlier feed-in-tariff had failed due to lack of market demand.

The REIPPPP aimed to provide a clearer framework under which the country’s public utility Eskom could enter into power purchase agreements with energy producers. It meant that investors could accurately forecast their profits and bankability. It has provided a long-term project pipeline for the industry and attracted investors, according to the Global Wind Energy Council (GWEC).

More than 90 wind projects qualified under the first four rounds of the REIPPPP. Each bidding round succeeded in reduced prices for renewable energy. Prices achieved in the fourth round averaged ZAR 0.71/kWh ($0.046/kWh) — half the ZAR 1.42/kWh price achieved in the first round.

The fifth bidding round of the programme, with 1.6GW wind capacity up for auction, closed in early August. Wind energy will also be installed as part of 2GW of hybrid projects that will provide dispatchable power to mitigate the risk of load shedding or blackouts.

The government is keen for renewable-energy sources such as wind to work with storage assets to produce distributed power closer to where demand is, and to provide offgrid electricity to far-flung areas of the country.

Another auction to award a further 1.6GW of onshore wind is expected later this year. 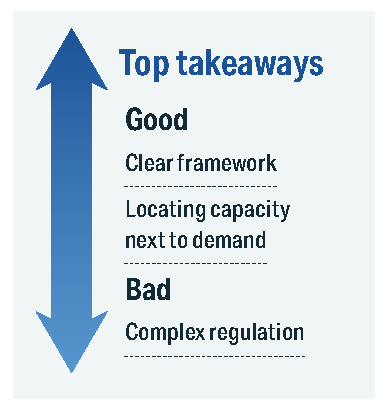 Post-2030, GWEC assumes that wind power will make up an even larger share of new generation. South Africa is considering a net-zero target — and although this is not yet enshrined in law, it is drafted and awaiting passage into legislation.

To meet the net-zero target by 2050, energy planning policy will need consistent implementation, with action from both private and public sectors, GWEC says. The government should prioritise easing the regulatory environment, implementing approved policies, and creating a conducive environment for private sector investment.