Wind energy has boomed in Mexico since the middle of the last decade thanks to liberalising reforms of the energy sector. But a new president with a radically different vision for the industry has crushed investment and raised question marks about its future.

A series of auctions from 2016 onwards to supply electricity to the Mexican grid attracted huge interest from international investors who promised to build 5GW of new generation capacity over the coming years.

“A fundamental element which facilitated everything was the authorities’ openness to constant dialogue... to discuss changes and propose development to the market rules,’’ Julio Valle of Mexico’s wind energy association Amdee told Windpower Monthly.

Thanks to Mexico’s huge wind resource, especially in coastal areas, as well as the fall in the cost of turbines, wind farms were major winners in the first three tenders.

Together with capacity factors of up to 50%, some areas offer remarkably stable wind, reducing the variability of wind farms, explained Pamela Avila, business development director at AES Mexico.

Global energy firms, including AES, Enel and Iberdrola, together with local companies poured in around $13 billion of investment, lifting installed capacity from just 2GW in 2013 to over 7GW by 2021.

As well as attracting significant investment, the opening up of Mexico’s energy markets has led to sharp falls in power tariffs with contracts awarded in the most recent tenders at long-term prices of less than $20/MWh.

The development of the wind energy sector has also created around 16,000 jobs since 2013, mostly in new plants producing turbines, towers and blades, according to trade body Amdee.

Investment was expected to continue to flow in over the coming years under contracts already awarded and through future tenders.

Instead, investment has tumbled following the election in 2018 of a new president, Andres Manuel Lopez Obrador — nicknamed Amlo. A left-winger who champions greater state control of the economy, he has said he wants to see CFE and Pemex regain their former glory as the driving forces behind the Mexican economy.

Since taking office, the government has suspended and then cancelled a fourth energy tender planned for late 2018, halted the issuing of new generation permits, and advanced legislation to grant priority to CFE’s ageing thermoelectric plants over more efficient renewables.

Companies have sought to fight the restrictive regulations through the courts, filing more than 700 injunctions since 2019, but any real clarity about the sector’s future is unlikely before 2024 when presidential elections take place.

“We could double installed capacity within five or six years, but everything suggests we will have to wait for greater willingness from the federal government to develop the sector,” says Amdee’s Valle.

Instead, installed capacity is expected to reach 8-9GW by 2024 as ongoing projects are completed. 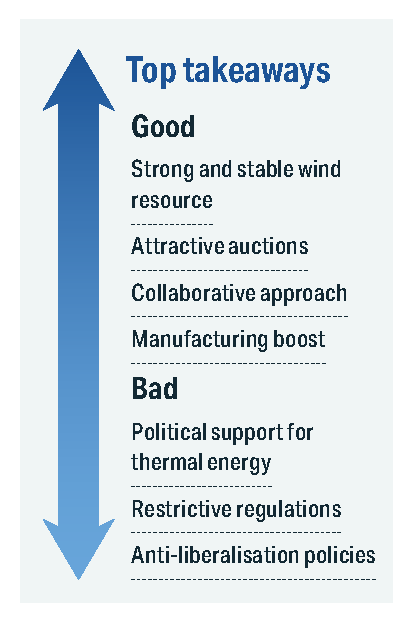 Meanwhile, dozens of wind-energy projects in development have been left in limbo and investment in the sector crashed from $1.3 billion in 2020 to an estimated $500 million this year.

Following his Morena party’s victory in mid-term elections in June this year, Amlo plans to complete the shake-up with a constitutional reform that would halt further liberalisation of the power sector, limiting private participation in electricity supplies to its current share of around 46%. The legislation could be presented to lawmakers later this year or in early 2022, but as the government lost its super-majority in congress, it will be reliant on opposition votes to approve the changes.

Despite the current impasse, many investors are staying put, confident of Mexico’s long-term potential for wind energy. “We are facing some challenges now, but we think that at some point the country will recover its attractiveness,” says AES’s Avila.