New offshore wind installations are expected to double this year as developers rush to complete projects before China scraps its existing feed-in tariffs, according to new analysis.

However, the Global Wind Energy Council (GWEC) warns that governments will need to improve policy to scale up installations at the pace required to help the world meet its carbon emissions targets.

“But as the G20 recognised at its most recent summit, we are in a climate emergency, and we can no longer be content with simply breaking records – the scale of growth we need to achieve for the future of our planet goes beyond anything we have seen before.

“The offshore industry believes they can meet this challenge, but there is a clear target and policy gap that countries need to fill for the industry to deliver”. 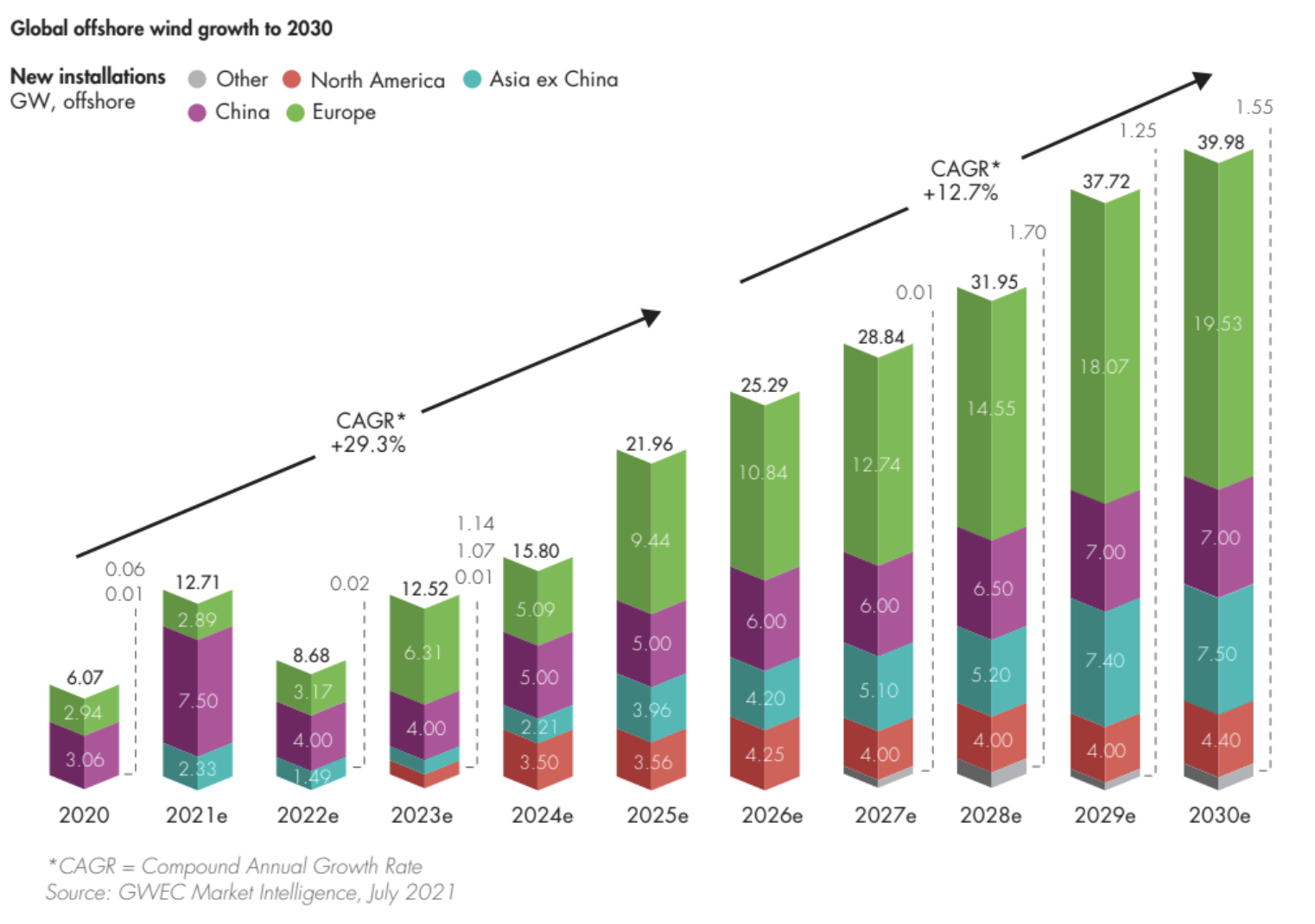 GWEC expects 12.7GW of new offshore wind capacity to be installed this year, including 7.5GW in China as developers rush to install capacity ahead of current feed-in tariffs expiring at the end of December.

This will be more than double the 6.1GW that came online in 2020, which — despite disruptions from the coronavirus pandemic — was the second highest annual total on record.

Just over half of 2020’s new additions came from China — the first time a region other than Europe accounted for the majority of offshore wind installations — while the remainder came from Europe.

Europe was still the largest regional offshore wind market at the end of 2020, but the continent is likely to trail Asia for annual installations this decade.

In the near-term the majority of growth outside of Europe will come from Asia, primarily China, Taiwan and Vietnam. Meanwhile, the US, Japan and South Korea are set to grow in importance from 2024 onwards.

GWEC expects 235GW of new offshore wind capacity to be added over the next decade — a 15% increase over its most recent outlook one year ago. It expected the global offshore wind sector to reach milestones of 20GW annual installations in 2025 and possibly 40GW in 2030,

This increased optimism is due to increased government ambitions, a sharp drop in costs making offshore wind one of the most competitive sources of energy, continuing progress in commercialisation and industrialisation for the floating sector, and offshore wind playing a greater role in facilitating cross-industry cooperation and decarbonisation, GWEC explained.

However, governments will still need to improve policy to scale up installations at the pace required to help the world meet its carbon emissions targets, it warned.

Feng Zhao, head of market intelligence and strategy at GWEC added: “We’ve seen unprecedented growth of offshore wind over the past decade with the UK, China and Germany leading the way.

“Looking to the next three decades, Asia will need to emerge as the world’s most prominent offshore wind region to deliver this massive scaling-up of capacity, accounting for 40% of the 2,000GW needed by 2050, followed by Europe with 32% and North America with 18%.

“While this may seem like a huge challenge, it is just a drop in the water compared to the 71,000GW of technical offshore wind potential that exists in the world today and goes largely untapped.”