Australia has come a long way from the politicisation of wind energy a decade ago. Social acceptance of the wind-energy sector has increased, reflecting a strong focus from industry on community engagement and benefit-sharing practices, according to trade body the Clean Energy Council (CEC).

Wind energy now accounts for 9.9% of total electricity generation in the country, and produced 22.6GWh in 2020, representing a nearly 36% share of renewable-energy generation.

The CEC cites favourable policy, excellent wind resources, falling technology prices, and the increasing investment appetite for clean-energy infrastructure as reasons for the growth of wind energy in recent years.

Australia’s wind resources are some of the best in the world and extend hundreds of kilometres inland. The coastal regions of western, south-western, southern and south-eastern Australia have particularly high potential.

But the biggest driver of growth in large-scale wind-power installation, and renewable-energy in general, has been the renewable energy target (RET). This created financial incentives for more clean-energy generation by mandating electricity retailers to buy green energy certificates.

Now that has been met, there is no longer a federal renewable energy target. Instead, Australia’s states and territories are leading the charge, developing policies and initiatives to drive the clean-energy transition.

Almost all have renewable-energy deployment targets of at least 50% by 2030. The island state of Tasmania has already exceeded this, achieving 100% renewable energy in 2020, and is now setting its sights on generating twice as much as it needs by 2040.

Queensland, New South Wales, Victoria, Tasmania and South Australia have also committed to the development of renewable energy zones, which aim to facilitate the strategic planning of transmission infrastructure and energy generation development.

Victoria will shortly call for tenders for its second reverse auction for 600MW of clean-energy generation. This will help the state meet its target of 40% renewables by 2025 and 50% by 2030.

New South Wales has legislated for the deployment of 12GW of clean-energy generation and 2GW of storage across five renewable-energy zones. As a result, the state expects A$32 billion of investment in renewables, to supply more than 60% of electricity by 2030, up from 21% in 2020. 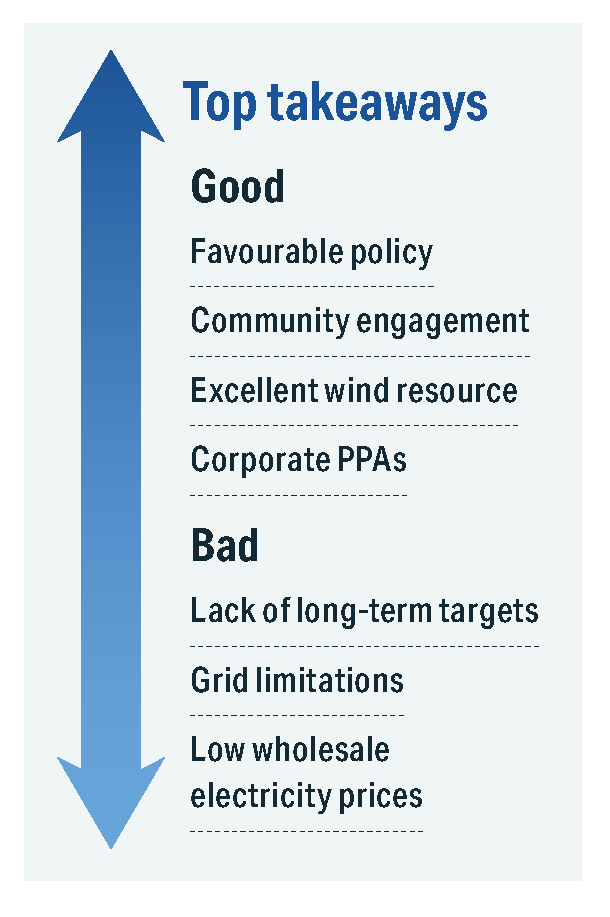 Nationally, there are wind farms totalling more than 1.3GW under construction, plus a 35GW pipeline, analysts at Wood Mackenzie said in February. However, they warned that capacity growth is being stifled by grid limitations and insufficient long-term targets.

Similarly, BloombergNEF warned in its Global Wind Market Outlook in June that Australia’s pipeline was drying up as investors were put off by lower wholesale electricity prices and grid challenges, with no new projects reaching financial close so far in 2021. “While the lower power price environment is making new investors nervous, a relatively healthy PPA market and the progression of renewable-energy zones is expected to continue to push deals to close in 2021, if at a slower rate,” BloombergNEF said.