Chinese OEM MingYang is supersizing its offshore turbine portfolio, preparing to install a prototype of its 11MW MySE11-203 with a 203-metre rotor in October.

It is also developing a 15MW platform with rotor sizes of 225-236 metres-plus for both high-wind and low-wind global markets, with a prototype planned within two to three years.

Both models are again based on MingYang's proven hybrid-drive concept, which combines compactness with favourable head mass weight, making it highly suitable for floating wind applications. These, in turn, build on a legacy of multiple smaller, "lightweight" hybrid-drive models from 3MW upwards, all based on the original Super Compact Drive (SCD) technology developed by German engineering consultancy aerodyn.

With Chinese offshore wind subsidies ending on 31 December, it's a busy year for MingYang in its home market, according to the company's president and chief technology officer (CTO), Qiying Zhang. The manufacturer is pushing several volume models in parallel: 5.5MW, 6.45MW, 7.25MW and the latest 8.3MW MySE8.3-180. 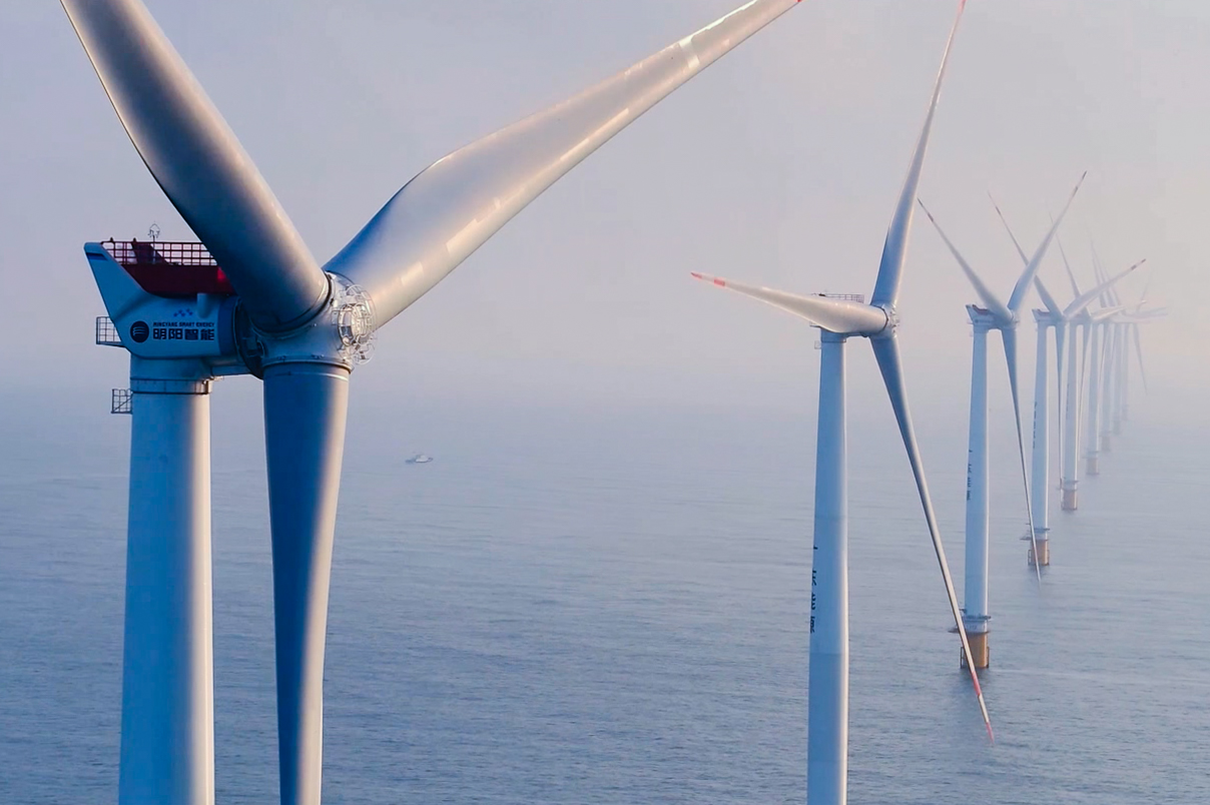 "With more and more experience gained in offshore projects, the in-house installation capability being built goes through a steep offshore learning curve, including the fact that installation vessels have become so much more efficient in just a year that they can now install nearly twice as many turbines. And we noticed that new market entrants provide adapted and modified 'semi-stationary' oil-rig-type jack-ups as installation solutions, which further helps for some projects."

In preparation for the 11MW prototype installation this October, the gearbox and generator are currently being bench tested and validated, Zhang says. The first batch of four 99-metre blades has also been completed — three for the prototype and one to be tested and validated statically and dynamically in the next few months.

The MySE11-203 medium-speed gearbox has a modest 1:21.9 step-up ratio, which together with 9rpm-rated rotor speed, results in 197.1rpm for the generator. This generator is flanged to a horizontal-to-vertical cast rear section that is directly mounted to the tower via the yaw bearing, without a separate nacelle cover. As is typical for hybrid-drive models, the gearbox, generator and rear-end horizontal housings have similar outer diameters and mounting flanges.

"The MySE11-203 further has a nacelle mass of only 388 tonnes. This is largely thanks to the double functionality of the housings in absorbing and transferring both structural loads and torque," Zhang explains.

"The current torque density of our gearboxes ranges from 140Nm/kg to 180Nm/kg, and all units are equipped with roller-type bearings in combination with our in-house flex-pin technology for even load distribution between the planets. The introduction of journal bearings is the next important drivetrain technology advancement step aimed at further boosting gearbox torque density levels. These bearings are currently being field-tested on an onshore model, and the first serial application will also be land-based", he adds. 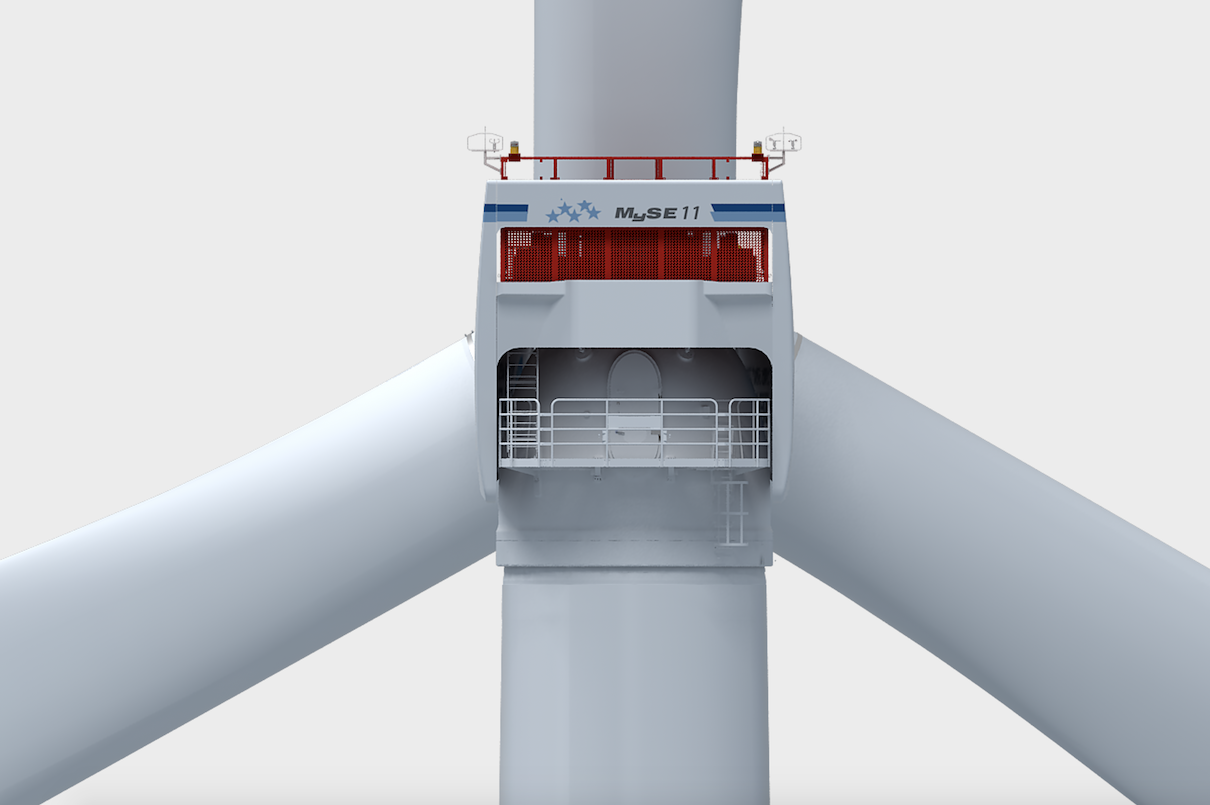 MingYang develops and produces all blades for its entire turbine range in-house. The 86.5-metre blades for the 8.3MW offshore model — its longest blades up to now — is still being built in glass-fibre reinforced epoxy (GFRE). However, for the 99-metre MySE11-99A1 blades with 38.5-tonne mass, the company switched to glass and carbon reinforced epoxy (G&CRE) composite. In comparison, Vestas' V174-9.5MW, introduced in 2019 and also designed for IEC IB and typhoon class IEC TC, has 85-metre blades each weighing 35 tonnes.

The MySE11-203's 95.6m/s rated tip speed is substantially higher set against the "semi-standard" roughly 90m/s for offshore application, but markedly less than the 104m/s value Vestas announced for the V236-15.0 MW.

"Our first 11MW prototype, like other MingYang offshore models, has its power-electronic system (converter, switchgear, transformer) located in the tower base. This could prove an optimal positioning for future floating wind applications because lowering the centre of gravity offers enhanced floater and overall systems stability," Zhang says.

'An alternative option being evaluated is to move all power electronics to the nacelle level. We also established a new department focused on the development, manufacturing, transportation and utilisation of hydrogen solutions. The integration with wind power requires another close look at systems positioning and optimising."

He adds that MingYang's internationalisation efforts are clearly starting to bear fruit. The company is making its offshore market entry in Europe, shipping ten 3MW MySE3.0-135 turbines to the 30MW Port of Taranto Port of Taranto (30MW) Offshoreoff Taranto, Apulia, Italy, Europe Click to see full details project in July, for completion by the end of the year.

This venture involves setting up a local service organisation. The company is in advanced discussions with a European developer for a major North Sea project and has several other wind farms in Europe under negotiation. MingYang also established a business and engineering centre in the German port of Hamburg and is considering building a factory in one of the continent's main wind markets. Closer to home, the firm expects to sign a contract with a Japanese client for a bottom-fixed project this year.

"These first steps to expand our international footprint are supported by a cumulative 10GW hybrid-drive onshore and offshore turbine track record, together with growing developer and market confidence in our technology," Zhang concludes. 'The MySE11-203 turbine will be certified by international certification body DNV, with a type certificate expected in late 2022. It is, above all, another major stepping-stone in our longer-term goal to become one of the leading global offshore wind suppliers."

In the second half of this year, developer China Three Gorges will install China's first floating wind system, a semi-submersible floater with a MingYang 5.5MW turbine atop, off the coast of Yangjiang City in Guangdong province.

Libing Zou, technical director of MingYang's wind energy research institute, is in charge of wind-turbine system development, including floating offshore wind turbines. He explains that boundary conditions in Chinese waters can currently be challenging for all developers due to shallow water depths. 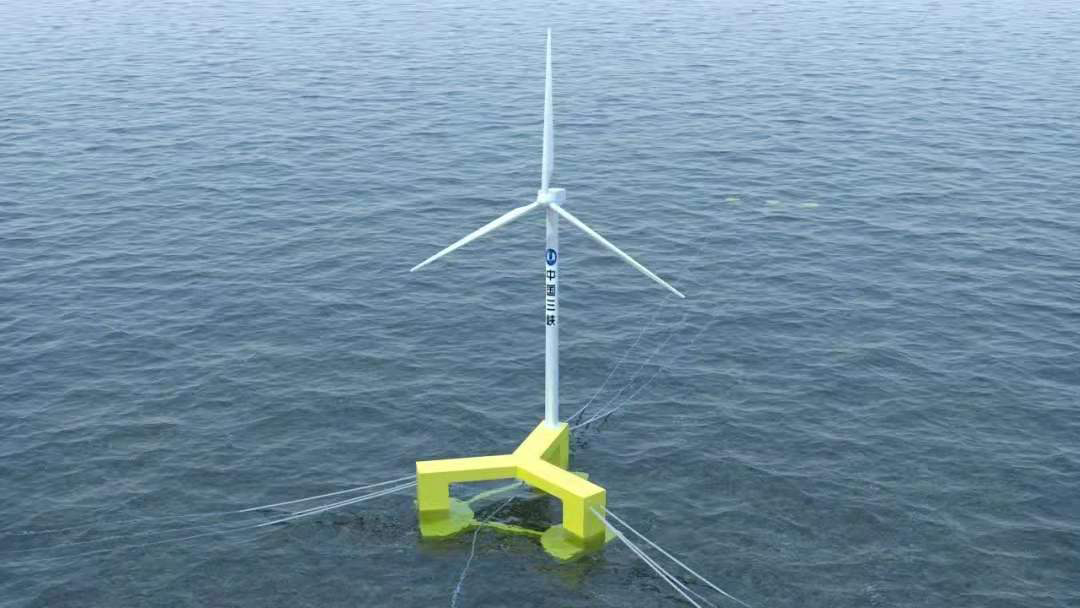 MingYang's MySE5.5-155 turbine will sit on a semi-submersible platform for the China Three Gorges floating installation

In the section of the South China Sea where the prototype floating unit will be operating, typical boundary conditions include ~8m/s mean wind speeds, and up to 70m/s extreme wind conditions during typhoon events.

Fully understanding local boundary conditions, including typhoon occurrences, and evaluating them against system costs and stability poses some of the most intense challenges for his engineers, according to Zou.

"To reduce loads and improve stability, we are researching a model-based prediction control strategy, creating a wind turbine model for power generation and load control. It takes into account mechanical vibration characteristics of the drivetrain, electro-mechanical conversion dynamics of the generator, and aerodynamic characteristics of the blades and rotor. We added a forward-looking wind-speed estimate function, which can potentially boost energy capture. The accuracy of the wind turbine dynamic model is essential to the control effect, some model parameters need to be identified by on-site testing, and we have our model verified by a measurement campaign."

The floating wind turbine is further equipped with hundreds of sensors for full monitoring of the turbine operation, and it transmits vibrations of the floating platform, tower, blade and other large components to the main control system for real-time monitoring and protection. This remote systems-control capability is continuously reinforced and updated by big data accumulated from hundreds of MingYang offshore and onshore turbines operating in typhoon-prone conditions. 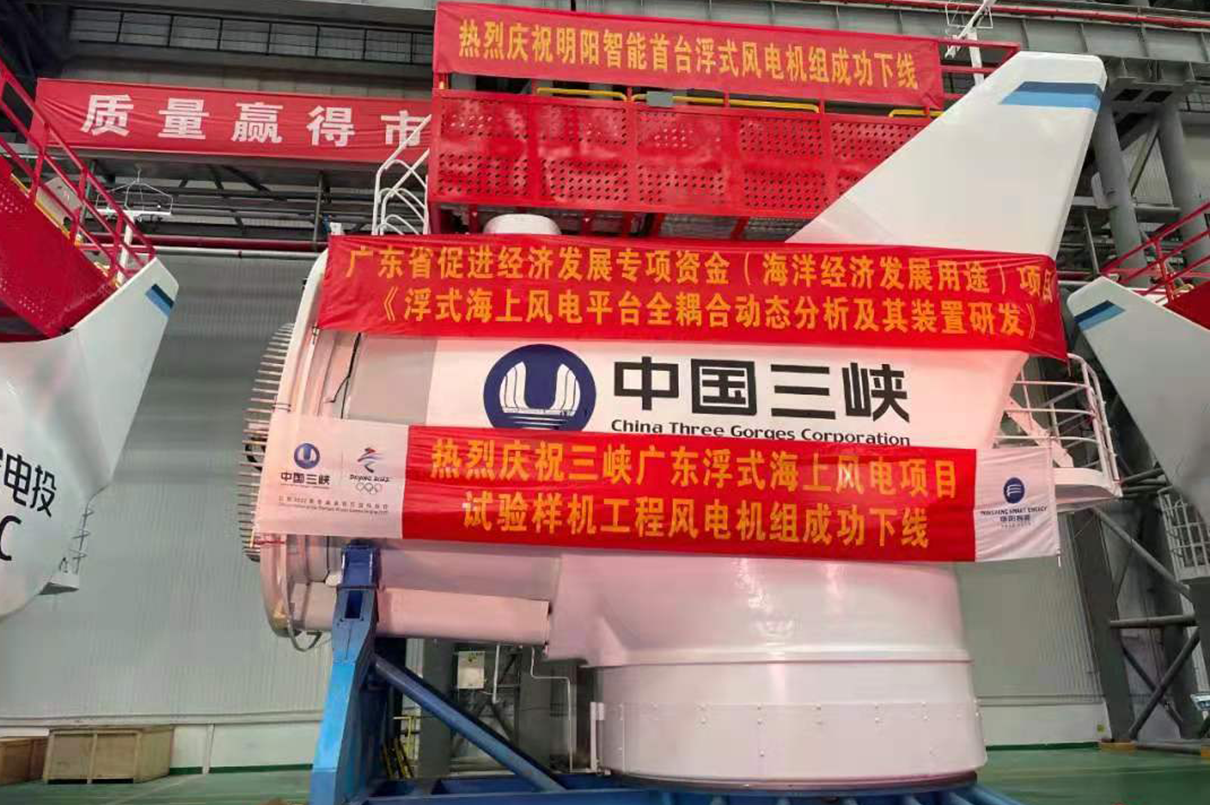 "This first floating wind turbine is optimised to adapt the surge and sway motion. We continue to iterate and update our current and future products to meet market requirements. These experiences will be carried over to future floating turbine projects with MingYang hardware, to continuously find the best ways to improve balancing floater and system cost and stability, and ultimately LCoE performance", he concludes.