As a result, most analysis to date has focused on aggregate fleet performance or the meteorological conditions that caused the event. While limited project outage information was available from ERCOT, the hour-by-hour performance of each plant had not been made public — until now.

Hourly project-level generation data is released by the Texas grid operator on a 60-day lag, which means that February information was released only recently. We processed this data from the grid operator with our intelligence tool REmap to make it easy to visualise and assess project-level performance.

In this analysis, we’ll take a closer look at the project-level hourly performance data and seek to identify key trends and takeaways from that granular dataset. We will focus on wind projects, as solar projects were widely known to have performed well.

To start, we want to highlight the high performing wind projects in ERCOT’s fleet. We’ll look at this by the project’s net capacity factor — that is, how much energy the project contributed to the grid adjusted for the size of the project. Here, we are focusing on performance during the deep freeze, so from 11 February through 19 February.

While generating essential megawatt-hours was critical to supporting the grid during the winter storm, another important topic is the financial impact of the event.

Overall, the financial “winners” were those projects that generated during the highest-price hours — the hours in which scarcity conditions elevated power prices. It is important to note, however, that the high value of generation during high priced events is often shared, in whole or in part, with the offtaker of the project as a result of the project’s offtake agreements.

What’s common across Texas is that the around-the-clock (ATC) price of power in February 2021 exceeded $1,500/MWh.

The highest realised value was achieved by the Peyton Creek wind farm, with a generation-weighted realised hub price that exceeded $2,000/MWh.

Not only did the Peyton Creek wind farm benefit from valuable generation at the hub level, it also benefited from limited node-to-hub congestion also known as “basis”. The project is located between Houston and Corpus Christi, with few wind projects nearby to compete for valuable transmission capacity.

Many of the other highest-value wind projects in the south of the ERCOT region are located in a relatively congested area further south, and experienced materially worse grid congestion. 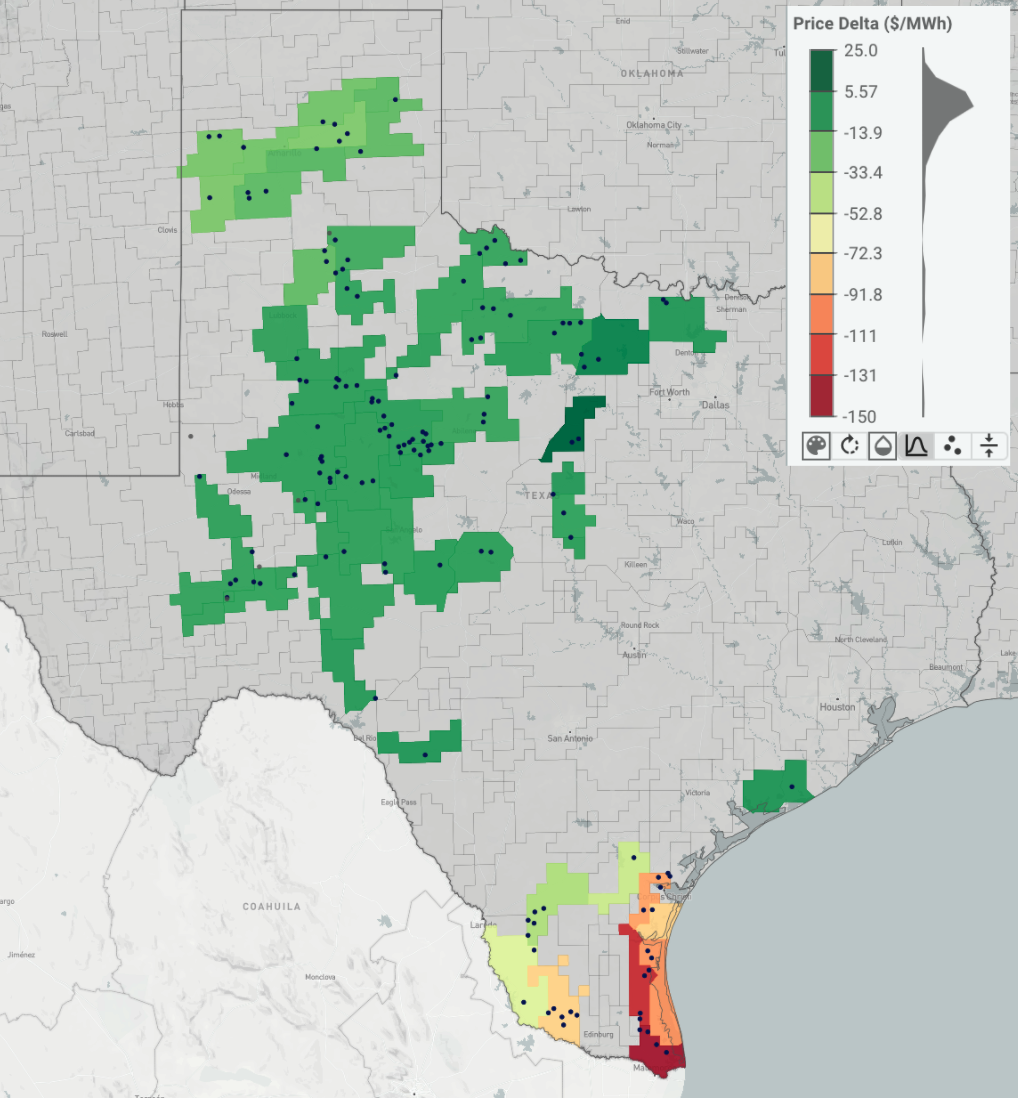 The map above shows that basis impacts varied widely across the ERCOT region during the winter storm. Positive basis (dark green) indicates that a project observed a higher LMP (localtinal marginal pricing) at the project node than the price at the hub. This is generally in the project’s favour, as offtake agreements usually settle at a hub. Any positive basis then is an upside for the project, while negative basis implies a loss for the project.

Although most of ERCOT experienced relatively minimal node to hub basis during the winter storm, projects in ERCOT's southern region saw significant basis impacts. When wind speeds are high and projects are generating, it’s not uncommon for projects in south Texas to suffer from congestion-related impacts.

While coastal Texas wind projects fared the best, there was considerably more variability in their financial performance in February 2021 than during past events. The graph below shows historical real-time shape in dollars per megawatt-hour for several wind projects along the coast of south Texas. 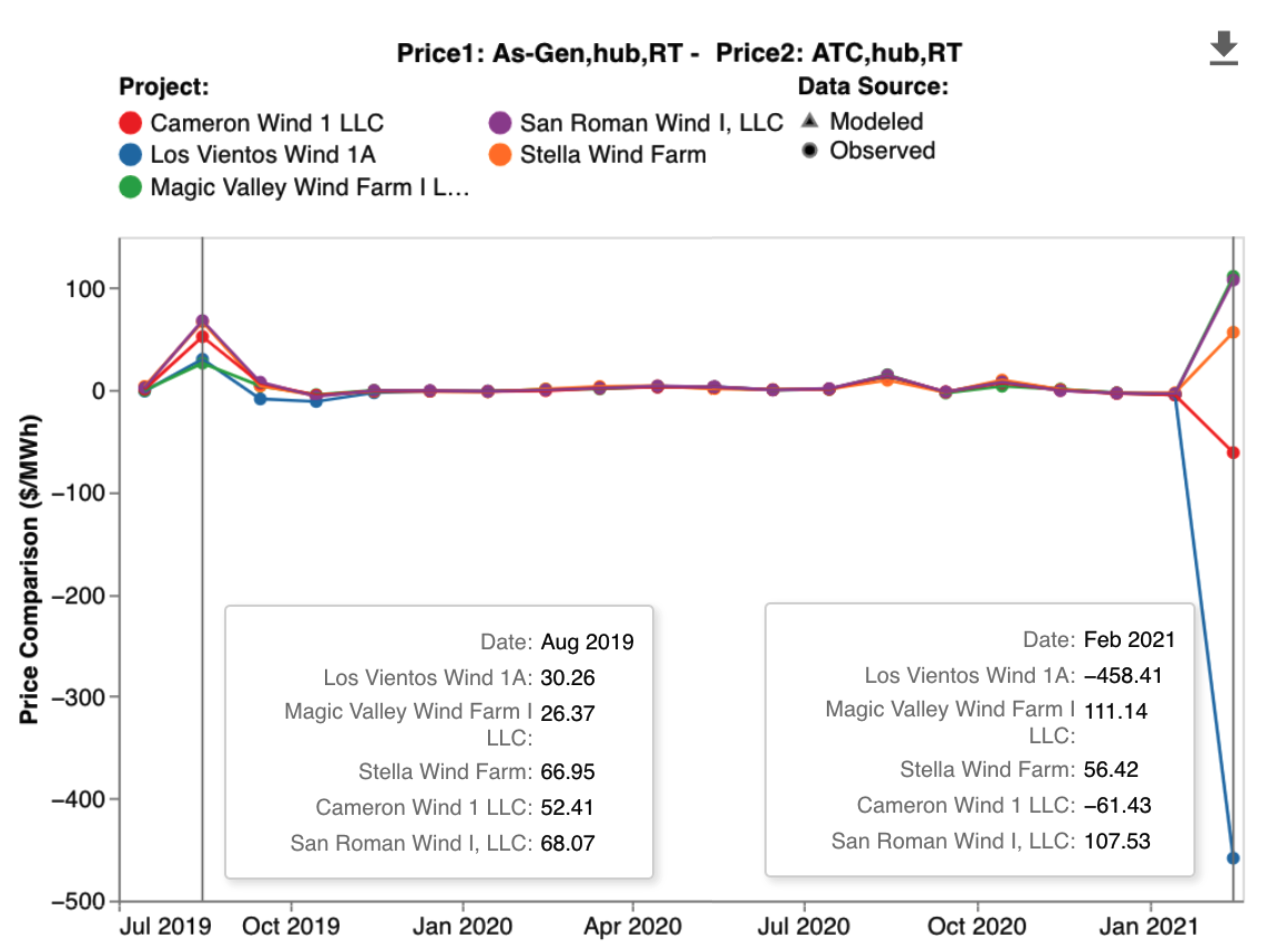 The graph above shows these projects all performed similarly during the extreme price event in August 2019, but diverged materially this February. Several coastal Texas wind projects saw extreme negative shape values in February 2021, a dramatic divergence from the August 2019 event. The negative shape values are likely due to poor operating performance during high-priced periods.

The worst revenue and shape values were seen by the wind and solar projects that were offline for the duration of the high priced event. These projects were unable to generate — whether due to operating decisions, transmission constraints, or other reasons — when electricity was most in demand and power prices at their highest.

Analysis of hourly data shows, for example, that the Big Spring wind farm generated zero megawatt-hours between 10 and 19 February. As such, the generation-weighted value is significantly lower than the around-the-clock price of power at the hub. These projects were heavily concentrated in west Texas.

Lowest performing wind projects in February 2021, by region, ranked by generation-weighted real-time price at the hub

The deep freeze in Texas was an unprecedented event in ERCOT’s history. Granular analysis of projects in the region gives visibility into which projects benefitted from the period of extreme market conditions and which projects didn’t.

Going forward, as the focus of generators and policymakers alike shifts towards resilience, having visibility into this performance data will become more important than ever.