The announcement follows the full acquisition of the former offshore joint venture with Mitsubishi Heavy Industries (MHI). However, even during the MHI Vestas era (2014-2020), the joint venture relied on Vestas for its turbine development activities.

The new giant has been developed for high-wind IEC I/S/T conditions, including typhoon-prone markets (IEC T), with the aim to "strike a balance between yield performance and the number of turbines required at project level", according to Vestas. The next-generation offshore platform is based on proven technical solutions from the 9MW offshore and the EnVentus onshore platforms.

According to Anders Nielsen, Vestas' chief technology officer, the huge scaling step leverages the learnings from over 1,200 turbines installed and operating in an offshore environment, including more than 370 units from the V164 series in operation now and over 560 by the end of this year. This offshore experience was combined with the company's most advanced turbine technology, applied to the EnVentus onshore platform, introduced in 2019.

The distinct visual appearance of the V236-15.0MW nacelle shows an elevated central section flanked by two horizontal side "compartments" and a nacelle-wide rear compartment with a passive cooler unit on top.

Vestas' head of offshore turbine development, Christian Gjerløv, explains what's hidden "under the bonnet": "The space inside each side compartment houses an uprated, modular and expandable power-converter unit that was initially developed for the EnVentus platform.

"The twin-converter solution is an example of our strategy to create optimal platform synergies, including in the manufacturing footprint, by transplanting modular medium-speed (6.0MW) EnVentus onshore technologies into this new offshore platform, and vice versa. Also new is that the liquid-immersed 66kV transformers, already standard fitting in the V164/V174 series, have been uprated and are now mounted at the main casting in front."

Placing these critical electric and power-electronic components close(r) to the tower centre creates a vibration-friendly operating environment, Gjerløv explains, while at the same time contributing towards making the design structurally efficient and mass-optimised. The result is a more compact, shorter nacelle, which still measures 28 metres with the helicopter-hoist deck and hub included. These sub-assemblies can be dismounted for transportation if needed. The nacelle is 11 metres high and 9 metres wide.

The V236-15.0 offers a capacity factor of more than 60% under high-wind (close to 10m/s) IEC I conditions, according to Vestas. As a result, it boosts annual energy production (AEP) — compared with the V174-9.5MW reference turbine — by up to 65% to around 80GWh for individual turbines. AEP for a 900MW wind farm at the reference level increases by up to 5% while requiring 34 fewer turbines, foundations, and associated internal inner-array cabling. These factors together offer substantial benefits for a stronger business case, including substantial reductions in the levelised cost of energy (LCoE), the company says. 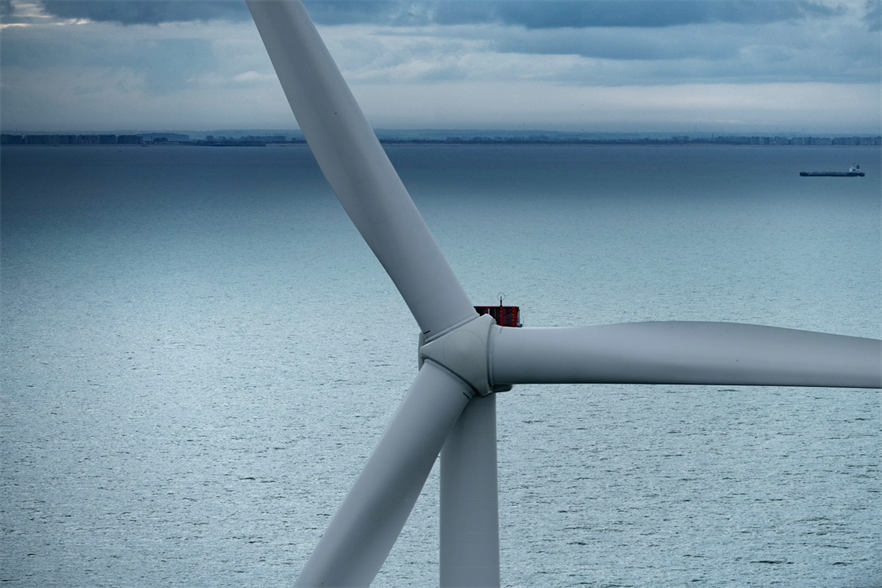 Vestas says the V236-15.0MW can boost annual energy production by up to 65% compared with the V174-9.5MW reference turbine (above)

The turbine features the latest Vestas "system 8000" control system – both hardware- and software- related – which was first introduced with the EnVentus platform. The enhanced hydraulic individual pitch control system is load-based, as with EnVentus, and it features a battery backup system to support critical functions such as upwind yaw control during typhoon conditions with simultaneous grid failure.

The V236 (below) will be fitted with record 115.5-metre long, in-house designed, structural-shell type blades, which structurally and aerodynamically build on the latest slender blade technologies and airfoils introduced for the EnVentus platform. Each of the huge blades incorporates structural reinforcements and pre-manufactured carbon inserts integrated in the upper and lower shells, says Gjerløv. 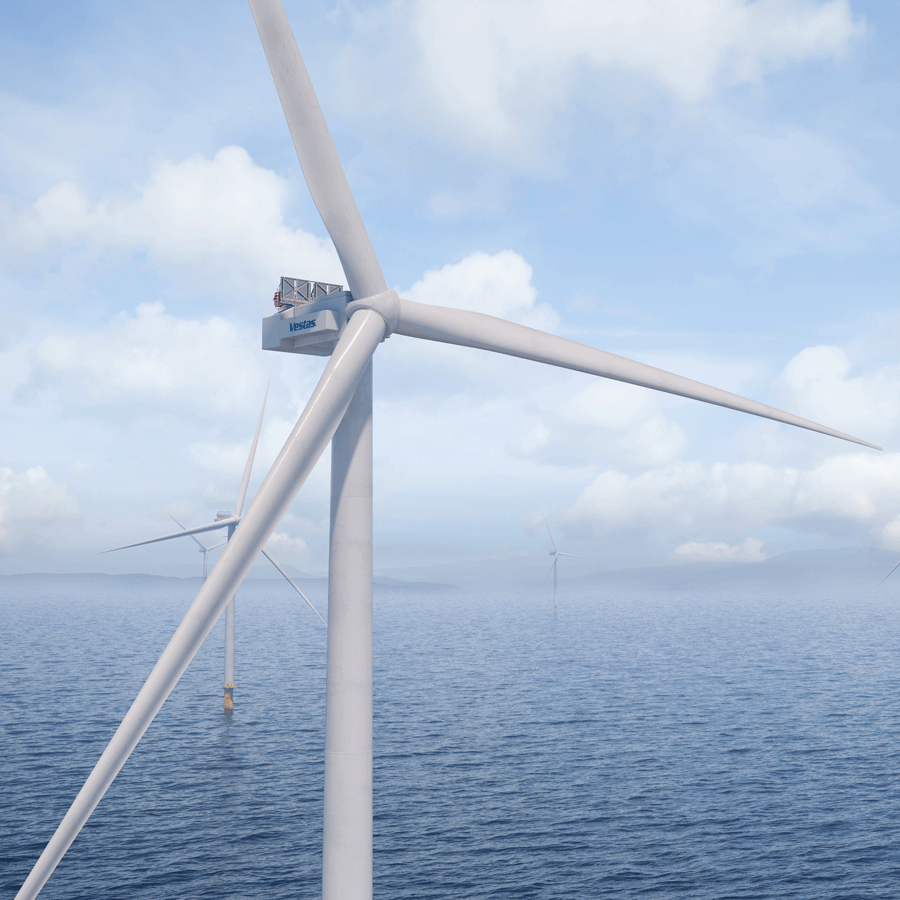 "The main design drivers were competitive mass; modest, optimised use of expensive carbon for optimal operational and lifecycle performance, and retaining a one-piece blade design from manufacturing, transportation and installation perspectives," he explains. "New for Vestas, and this turbine model, is that the rated tip speed is raised from the 90m/s — standard values for the V164 and V174, and also common for offshore wind — to 104m/s."

He goes on to explain that this 16% increase in tip speed is enabled by incorporating an erosion-resistant leading-edge shell into the blade's laminate. The solution was designed and validated for offshore applications, with its reliability performance-tested and confirmed over a long period on a V164 turbine in representative conditions.

An important benefit of the faster-spinning V236 rotor is that this offers substantial reduction in gearbox input torque, which, in turn, allows for a more compact design. The entire drivetrain is functionally an upscaling along proven EnVentus design principles, Gjerløv adds. This includes retaining a modular main bearing unit carrying the rotor in front and a rear-end interface for gearbox and generator linkage, as with the EnVentus. 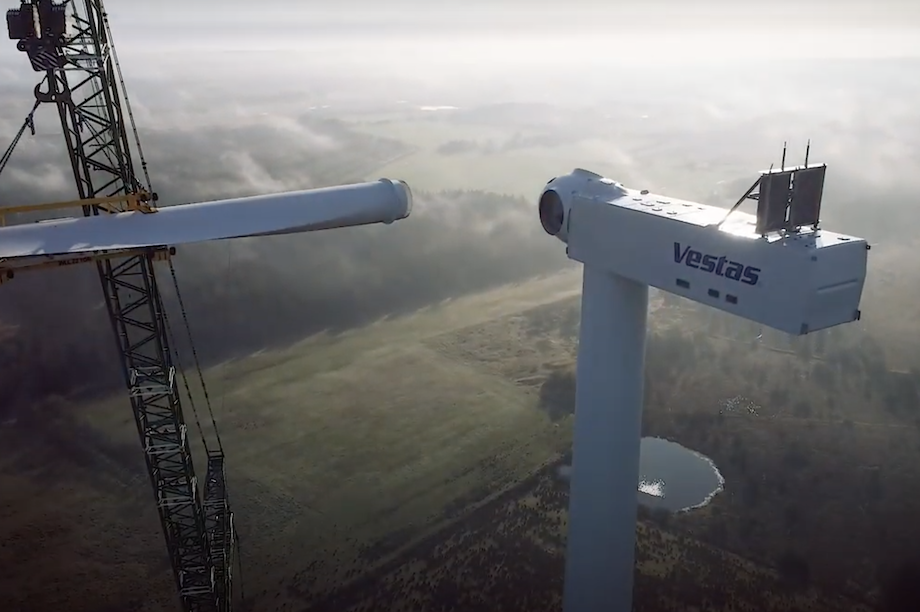 "This drivetrain layout was first introduced with the medium-speed V164-7.0MW in 2011, but that version featured a different design differential gearbox with roller-type bearings. The V236 gearbox has three planetary step-up stages versus two for EnVentus, to compensate for the much higher rating and larger rotor with an inherently reduced rotor speed. The design layout further enables smaller dimensions, especially for the first low-speed gear stage," he says.

Similar to the smaller EnVentus unit, the V236 gearbox has journal bearings in all main positions. Its torque density is 48% higher set against the V174-9.5 MW reference gearbox, with a value exceeding 200Nm/kg. The combination of high torque density and the V236's increased tip speed offers a mass and cost-optimised overall solution. As before, Vestas developed the gearbox and the full drivetrain in partnership with ZF Wind Power. However, transport logistics of the fully assembled and tested units have not been decided yet and could be different from the EnVentus solution, due to the much larger scale of the V236 gearbox.

The Vestas engineers eliminated the low-speed coupling between the main bearing unit and the gearbox deployed with the V164/V174 series to prevent rotor-induced bending moments from entering the gearbox input side. This expensive drivetrain element had already been omitted from the EnVentus drivetrain, but, according to Gjerløv, a substantial design effort was again required to create a structurally stable enough interface between the main bearing unit and gearbox.

The in-house-developed permanent magnet generator, based on experiences with the EnVentus platform, is bigger and longer because the rating is 2.5 times higher. Vestas again avoided using the rather scarce and expensive rare earth Dysprosium, characterised by higher price volatility and more supply-chain security risk compared with Neodymium. However, adding Dysprosium allows a generator to run at much higher magnet operating temperatures, so leaving it out means the design requires an enhanced thermal control mechanism. Vestas solved this by connecting the fully sealed air-cooled PMG product with an air-water heat exchanger to the passive rooftop cooler.

The development of the V236 platform commenced in early 2020, and the prototype is planned for early in the second half of 2022, followed by serial production ramp-up in 2024. It will enter the market in a main 15MW V236-15.0MW model version, and a second variant with a derated 13.6MW operational mode "to optimise for project specific considerations". 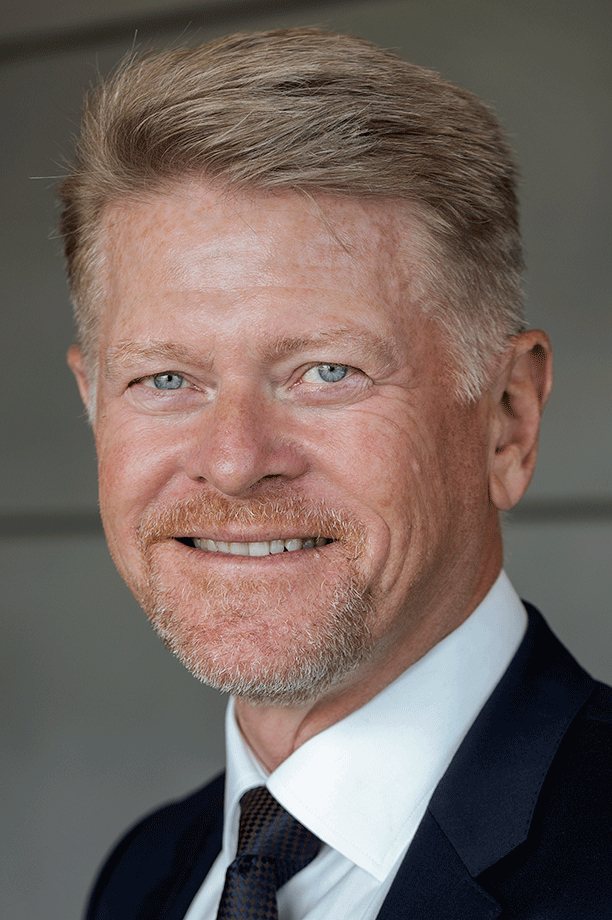 CTO Nielsen says: "The V236-15MW is developed as a global product for industrialisation and operation on a global scale. We are convinced that it is a well-positioned competitive product for these conditions, focused on maximum value creation for our clients.

"We further believe that the V236-13.6MW could become an attractive offering in low-wind Asian markets or, for instance, in meeting specific liberalised electricity market conditions as in California, US. There will also be future opportunities for the V174-9.5MW, especially in conditions where a different product scale is required."

Further scaling of the V236-15.0MW along the same evolutionary development pathway could therefore in future result in uprated outcomes like a 17MW V236-17.0MW with 389W/m2.

Nielsen does not want to elaborate on any possible potential future scaling plans with the new next-generation platform at this stage. But he is convinced that the industry-dominating geared drivetrain solution consistent with Vestas' onshore variants will allow Vestas to optimally reapply load transfer and management best practices. And with the scale and capabilities that come with being the global market leader in onshore wind, it is crucial for Vestas to become a technology and market leader in offshore wind as well, he says.

"With the V236-15.0MW, we have set a new industry benchmark for performance and for pursuing industrialisation potential to the full. At the same time, we will expand the industrialisation of turbine design through a modular approach, with scaling components for continued offshore technology cost reduction being a main driver. This approach will make this new Vestas turbine offering already highly competitive in offshore tenders this year, and it is a key building block in reaching a global offshore market leader position by 2025", he concludes.