Annual global offshore wind additions reached record levels despite the impacts of the coronavirus pandemic last year, with 5.2GW connected to the grid around the world.

Meanwhille, China is set to over overtake Germany “very soon” as the second-largest offshore wind market behind the UK, according to the World Forum Offshore Wind (WFO).

The industry body counts 'added capacity' as when all turbines at a wind farm are installed and first power is generated. It counts a project's entire capacity when this milestone is reached, rather than in stages.

WFO managing director Gunnar Herzig said: "The record year of 2020 illustrates the continued growth path and the robustness of the global offshore wind industry even during challenging economic times like these."

“The fact that China will very soon overtake Germany as the second-largest offshore wind market shows the significance of this rapidly growing market. The global growth trajectory is going to accelerate further with more and more ever larger-scale projects going online."

He also pointed to the UK’s 1320MW Hornsea Project Two Hornsea Project Two (1320MW) Offshoreoff Yorkshire, UK, Europe Click to see full details – the world’s first 1GW-plus project – as being the shape of things to come, and added: "Soon this is going to be the new normal for offshore wind in terms of project sizes which means more economies of scale and lower prices for offshore wind electricity.”

There was 5,206MW of added offshore wind capacity globally in 2020 (see above) – up marginally from the 5,194MW in 2019 – with strong growth despite the impacts of the pandemic, the report stated.

Internationally, 15 new offshore wind farms went into operation in the UK, China, Germany, Portugal, Belgium, the Netherlands and the US. 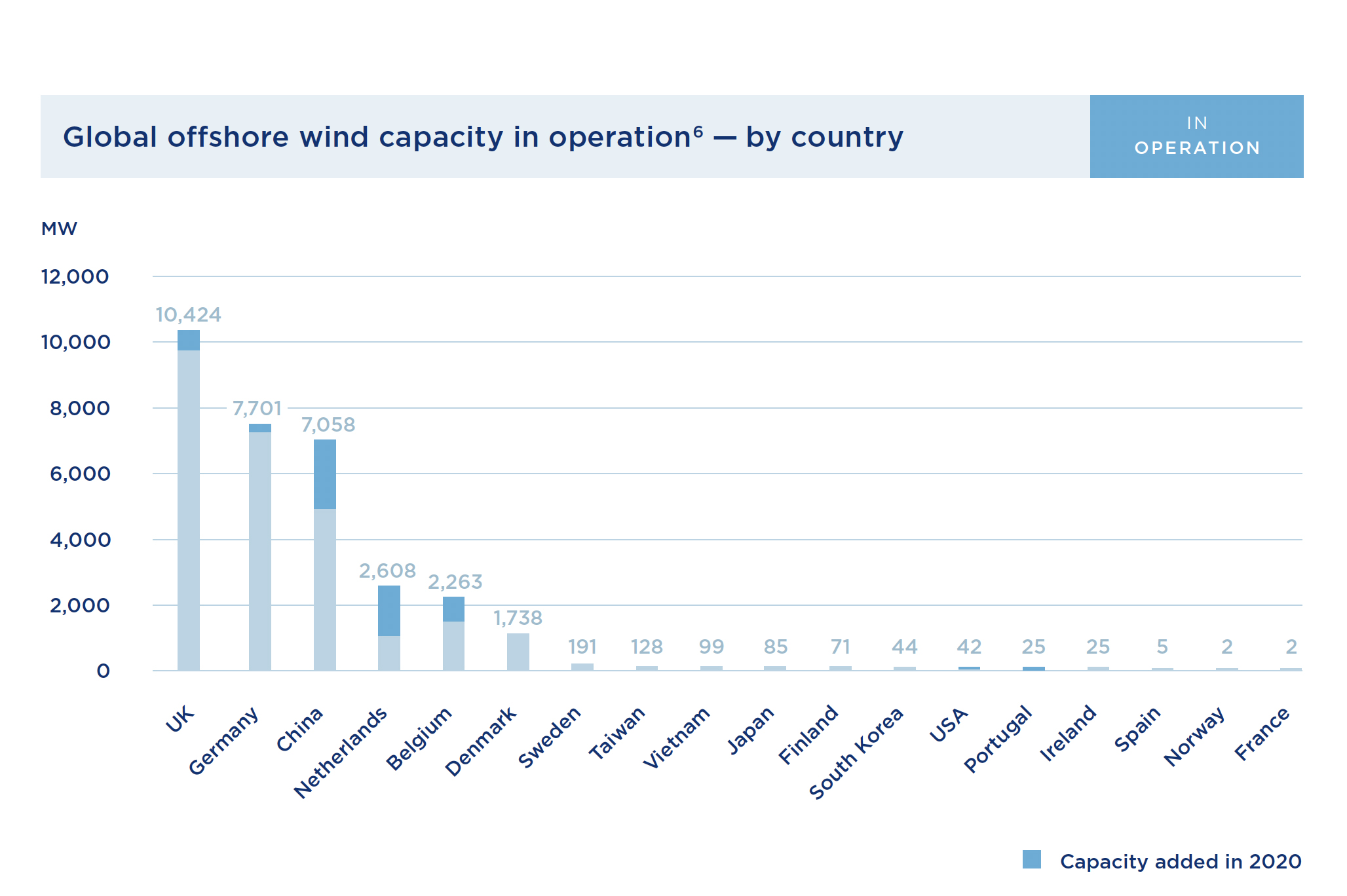 China has continued its rapid rise and growth with 2.1GW of newly installed capacity in 2020, taking its cumulative total to 7GW by the end of the year.

Germany narrowly held on to second place with 7.7GW of cumulative capacity at the end of the year, but did not add any capacity during the second half of 2020.

The Netherlands (2.6GW cumulative capacity at the end of the year) leapfrogged Belgium (2.2GW) and Denmark (1.7GW), having added 1.5GW of offshore wind capacity in the second half of 2020.

The WFO reports that China’s offshore wind sector continues to grow rapidly with a total capacity of 4.4GW currently under construction.

Globally, the average size of offshore wind projects under construction worldwide was 381MW, the report found.

Almost 10GW of offshore wind capacity was in construction globally by the end of 2020, with about 44% of this capacity being installed in China.