Developers of six proposed offshore wind projects in English and Welsh waters secured rights to potentially build 8GW of new wind capacity in the UK in the fourth round of offshore wind leasing announced today.

The other winners were the Macquarie-owned Green Investment Group alongside oil major Total, which secured a site with the potential of supporting 1.5GW of capacity off the Lincolnshire Coast, east of the Humber Estuary, as well as Offshore Wind Limited – a joint venture between Spain's Cobra Group and UK-based floating wind specialists Flotation Energy for a site that could support 480MW of capacity off the Lancashire Coast, west of Blackpool and south west of Morecambe Bay. 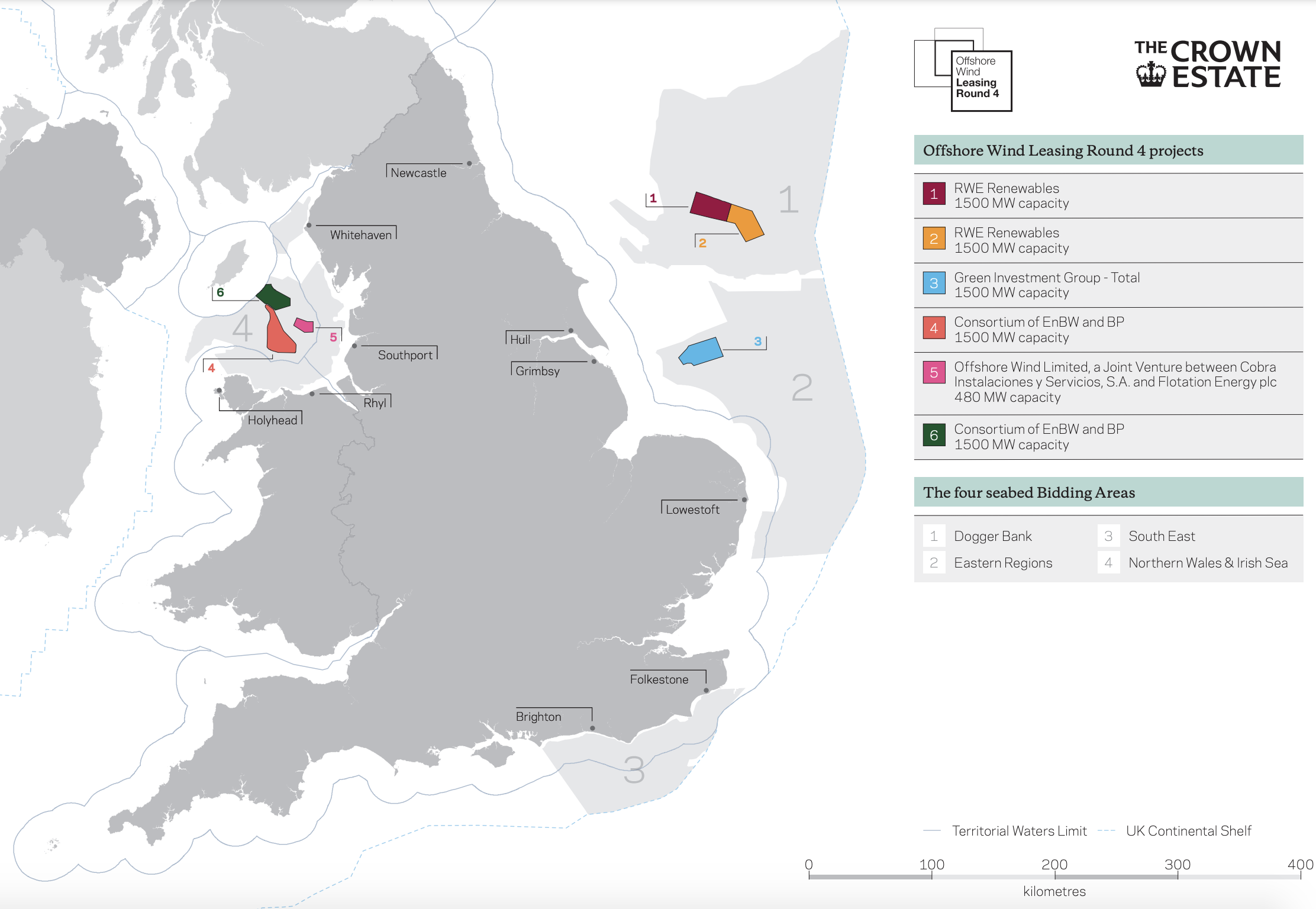 In total, the successful bidders have committed an initial investment of £879 million (€1 billion) in option fee deposits.

This is the first time a bidding process has set ‘option fees’, which developers must pay annually until companies finalise their plans to build the new wind farms (up to a maximum of ten years).

The trade body RenewableUK said the latest auction round represented a significant decrease on the 32GW secured in the third leasing round held in 2010.

RenewableUK’s deputy chief executive, Melanie Onn, is also worried that the latest leasing round showed that while demand for new offshore wind projects “had never been higher”, too few sites were made available to meet the demand.

She said: “Any auction run on that basis will inevitably lead to high fees like these, and our concern is that this could ultimately mean higher costs for developers and consumers.

“Going forward we need more clarity from the Crown Estate on the timing, size and speed of future leasing rounds. Sustainable competition and prices are vital for consumers, industry and the supply chain”.

In total, the Crown Estate believes the latest wind farms will help employ as many as 60,000 people by 2030, up from approximately 11,000 today and save approximately 12.5 million tonnes of CO2 emissions a year, equivalent to 19% of the nation’s annual household emissions.

Labbad added: “With a net zero goal, some of the best offshore wind resources in the world, and clear commitment from government and industry to continue investing in the low carbon economy, the UK stands ready to play its part in addressing the global climate crisis.

“The task now is to work together across the sector, to coordinate the development we need offshore, in a way which is sensitive to the importance of biodiversity in our precious marine environment and brings new employment opportunities and growth to a range of communities across [the] country.”

In a statement, he said: "Bidders shouldn’t have to pay large amounts for the right to develop offshore wind. And they’re making so little capacity available, that developers are having to pay huge amounts to win the auction. The developers will have to pass on these costs, so it’s a big new burden on consumers with no additional benefits."

The successful developers will now undertake important environmental assessments under UK construction law, known as a habitats regulation assessment (HRA) – a legal requirement that must be completed before the Crown Estate can award seabed rights.

According to the Crown Estate, the HRA process is anticipated to be wrapped up by early next year. If approved, the seabed landlord sees no reason why projects could not generate electricity by the end of the decade.