A record €26.3 billion was invested in new European offshore wind farms in 2020, but new installations continued to lag behind the volumes needed to hit EU targets.

These investments will finance 7.1GW of new capacity, but this still falls well short of the annual installations needed to meet European governments’ targets

However, it warned that installations need to ramp up, and more still needs to be done to enable cross-border offshore wind farms, simplify and accelerate project permitting and improve maritime spatial planning.

“Investors see that offshore wind is cheap, reliable and resilient – and that governments want more of it. And these investments will create jobs and growth,” he said.

The record €26.3 billion investments in seven new projects off the UK, the Netherlands, Germany and France will finance 7.1GW of offshore wind capacity.

This €3.7 million/MW investment average is below previous levels. In 2019, final investment decisions (FIDs) were made on four wind farms, with an average investment of €4.3 million/MW – although this included France’s first offshore wind farm, the price of which had been pushed up permitting challenges and having to manufacture the project’s turbines in France, in accordance with tender rules.

The UK has attracted €59 billion of new investments since 2010, making it Europe’s largest offshore wind market for capital spending commitments in the past ten years, ahead of Germany, where €28 billion has been spent in the same period.

Nine new offshore wind farms were connected to the grid in five countries last year, with the most capacity installed off the Netherlands (1,943MW), followed by Belgium (706MW), the UK (483MW), Germany (219MW) and Portugal (17MW).

The 2.9GW connected to the grid last year was in line with WindEurope’s expectations, and was down from a record 3.6GW added in 2019. 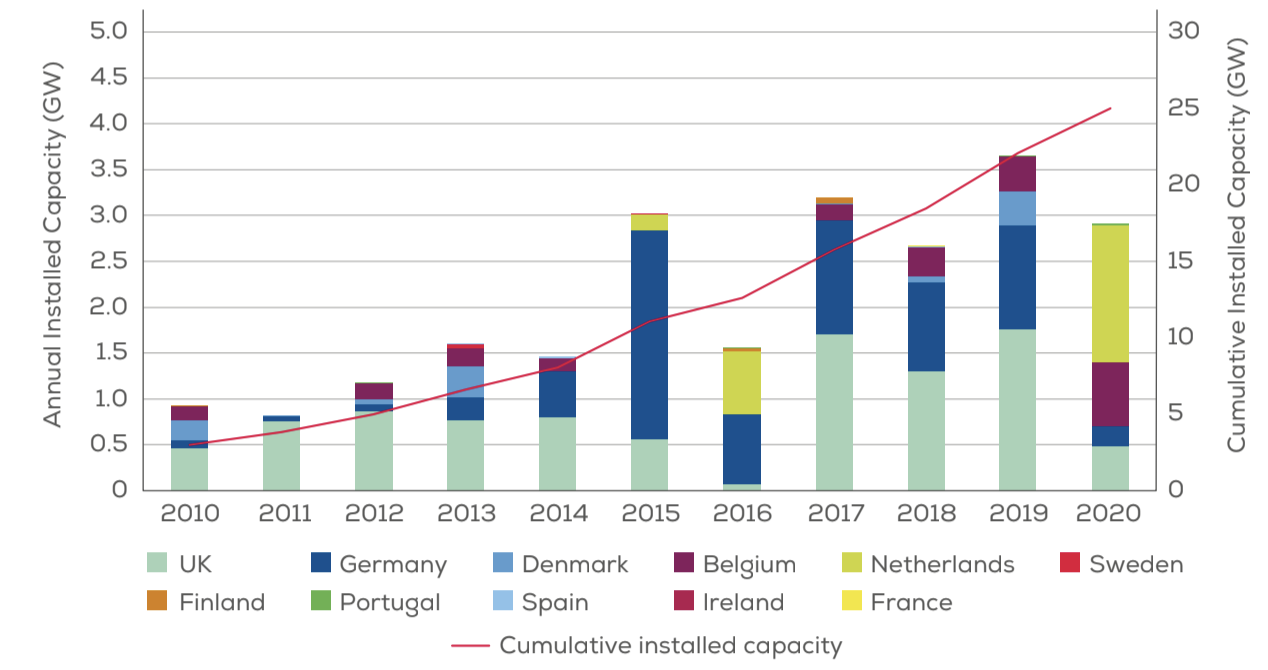 Beyond the North Sea

While the vast majority of new capacity last year was in offshore wind’s traditional strongholds in Europe, WindEurope noted the pace of development was picking up in other parts of the continent too.

France will soon start building its first large-scale offshore wind farms, following FIDs on 1GW of capacity. It also has plans for four small floating projects and is due to tender floating offshore wind capacity later this year.

Elsewhere, Poland passed an offshore wind law aiming for 28GW of capacity by 2050 and initiated agreement among all eight Baltic countries to cooperate on offshore wind.

Greece is about to adopt plans for offshore wind, and three Baltic states – Estonia, Latvia and Lithuania – are all developing projects.

“Offshore wind is no longer just about the North Sea,” WindEurope’s Dickson said.

“It’s rapidly becoming a pan-European affair. More and more countries are making commitments on it. And the rapid advance of floating offshore wind will help the build-out in the Atlantic, Mediterranean and Black seas.”

Six power purchase agreements were struck for output from 722MW of offshore wind capacity last year – new records for both the number of deals and the capacity contracted.

WindEurope noted that offshore wind power purchase agreements are a valuable way for corporates to source large volumes of renewable electricity and also help project developers to guarantee their revenue in the long-term.

This is particularly important for zero-subsidy bids on new projects – as was the case in Europe’s only offshore wind tender last year, in which Shell and Eneco successfully partnered for the 759MW Hollandse Kust Noord Hollandse Kust Noord (759MW) Offshoreoff Egmond aan Zee, Netherlands, Europe Click to see full details project off the Netherlands – which fully exposes developers to the wholesale market price.

There were large orders placed for GE’s 13MW model in 2020, while both the US tech giant and rival manufacturer Siemens Gamesa also announced new 14MW turbines.

New offshore wind farms now have capacity factors of more than 50%, according to WindEurope.

However, despite positive trends in technology and finance, more still needs to be done to deliver the volumes needed to reach European governments’ combined commitments of 111GW offshore wind capacity by 2030, and the EU targets of 300GW by 2050.

WindEurope stated there was no reason to assume these targets could not be hit, but warned that the next two to three years will be crucial for setting the right framework to meet these targets.

The industry body added that governments will need to tamp up build-out from the current 3GW/year level to 11GW/year by 2026 and then maintain this installation pace. They should also provide a clear pipeline of auctions for contracts for difference, it stated.