Rotterdam-based Tetrahedron has developed a revolutionary high-lift crane concept for 12-20MW-plus nacelles and blade installation, both for jack-up retrofits and new-built units, which won Windpower Monthly's Turbines of the Year 2020 Innovation category.

The company is in talks with potential clients and expects to sell the first Tetrahedron cranes this year. The first units could then enter active service in late 2023 or the first half of 2024, following a two-year construction time.

Upgrading cranes to handle higher-rated turbines has become a recurrent practice since the early days of the offshore wind industry. It is illustrative of the complexity and uncertainties surrounding rapid technology and market developments, as the sector grows and widens its geographical spread.

A key innovative feature of all three Tetrahedron cranes is that they can be retrofitted to what are now considered to be modest-size jack-up vessels, built in 2008-2009, typically used to install Siemens' 3.6MW "offshore workhorse" turbines. These vessels could be upgraded and optimised continuously for installing bigger turbines up to the current 8-10MW-plus volume class, adding value for vessel operators and helping to prevent a supply shortfall.

"This successful adaptation and optimising cycle may now have reached its final technical limits for the upcoming 12-15MW turbine class," Stavenuiter says. "These machines are characterised by much higher nacelle masses and a 50-60-metre-plus increase in rotor sizes, pushing them into a new 220-230-metre-plus range.

Plenty of crane vessels originating from the offshore oil and gas industry will become available for installing the required supersize monopile substructures with masses up to 2,500 tonnes, he adds. This means existing 2008/9 jack-ups will mainly be used to install the actual wind turbines.

The single biggest critical factor hampering a further upgrade of 2008/9 jack-ups is providing sufficient lifting height to install the larger turbines, Stavenuiter thinks. Currently the main limiting factor is the standard-fitted luffing boom crane design, a crane type built around one of four (or six) jack-up legs, known as a leg-encircling crane layout.

Now a near-standard combination, this leg-encircling crane layout was originally an innovation of Dutch marine engineering consultancy GustoMSC. It was first applied at the Crowie crane platform in 1960.

The concept was reintroduced in 2012, with the second-generation wind turbine installation vessel Sea Installer, built for Dong Energy (now Ørsted) and Siemens-owned A2Sea. It offerered maximised deck space and superior crane manoeuvrability compared with deck-mounted crane. A2Sea and its vessels were acquired by Deme Group in 2017. 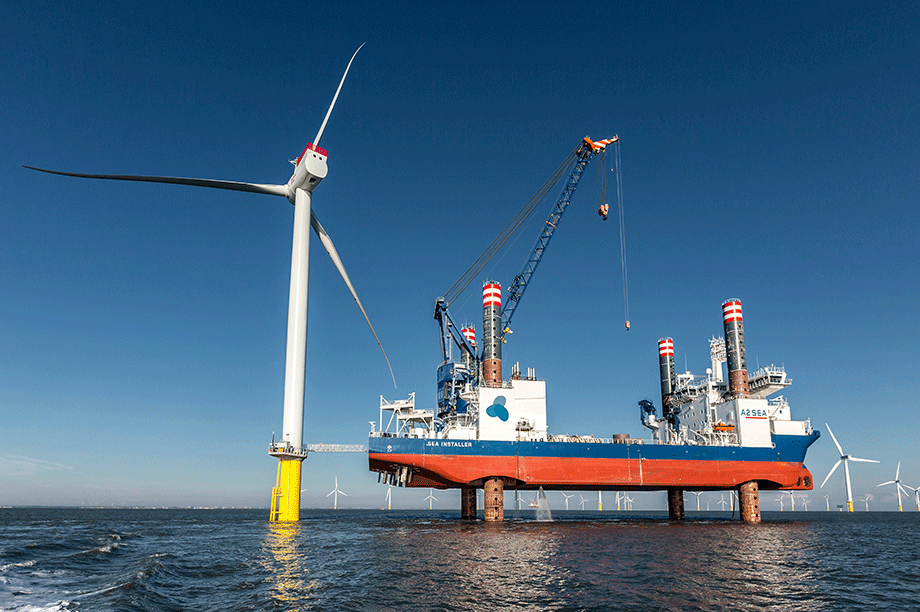 A main characteristic of luffing boom cranes is a boom-base rotation point that faces the load, whereby load plus boom own-mass must be hoisted together. "A marine-engineering rule of thumb dictates that you can't lift a load higher than the vessel length, due to the boom length in horizontal rest position," says Stavenuiter.

"One could, of course, opt for a much longer boom, either telescopic, knuckling so it folds back, or built in one piece. However, such alternatives come at a weight penalty for the boom, which affects the maximum load curve. This consists of the actual payload — about 850 tonnes for 12-14MW nacelles including rigging tools — multiplied by a minimum 40-metre distance required between the crane axis and load."

Another inherent luffing boom crane fact he points out is that deck-bending loads in between the legs increase with turbines size and mass.

If a jack-up owner decides to increase the capacity of this type of crane from an initial 1,000 tonnes at 120 metres above the waterline (AWL) to, for instance, 1,250t at 200m AWL, the enlarged crane-base mounting area and deck section in-between the legs must both be reinforced in parallel. This structural reinforcement challenge is typically tackled by adding more structural steel in the ship, but this also means increased hull mass, reduced payload and higher propulsion power demand.

The operational characteristics of the Tetrahedron crane mounted on a similar size 2008/2009 jack-up-vessel as in the previous example are quite different. First, it shifts the crane luffing rotation point from in front of the leg-encircling-crane-house jack-up leg to behind it (aft side), plus it is mounted at a higher elevation.

"The single most important benefit of this rotation point repositioning is that it greatly reduces deck-bending loads. The combination with efficient force-flow through the tetrahedron-shape boom assembly now allows lifting 12-15MW and even 16-20MW-plus nacelles and blades. At the same time, it provides around 50 metres extra lifting height, again without increasing deck bending loads", Stavenuiter observes.

The actual Tetrahedron is the crane's main central element, a triangular-shaped structure with the two shortest sides in lattice steel, and the longest, "closing" side consisting of two high-strength, lightweight aramid cables of constant length. The integration of the aramid pendants has been researched in close cooperation with Fibremax, a Dutch company that has already produced several Lloyds and DNV GL certified aramid pendants for offshore cranes.

The full Tetrahedron assembly replaces the traditional luffing boom. And because its bottom section comprises two lattice-steel arms that widen towards the rotation point, it is leg-encircling "by nature", adds Stavenuiter.

"We could further eliminate multiple long, heavy steel cables reeling in and out at cable winches to enable luffing boom circular up and down movement during crane hoisting operations. This process is replaced by a new Tetrahedron function, whereby a lattice-steel beam in semi-vertical fixed position incorporates a cable winch that provides compact multiple-cable linkage to the Tetrahedron's integrated winch (see below)." 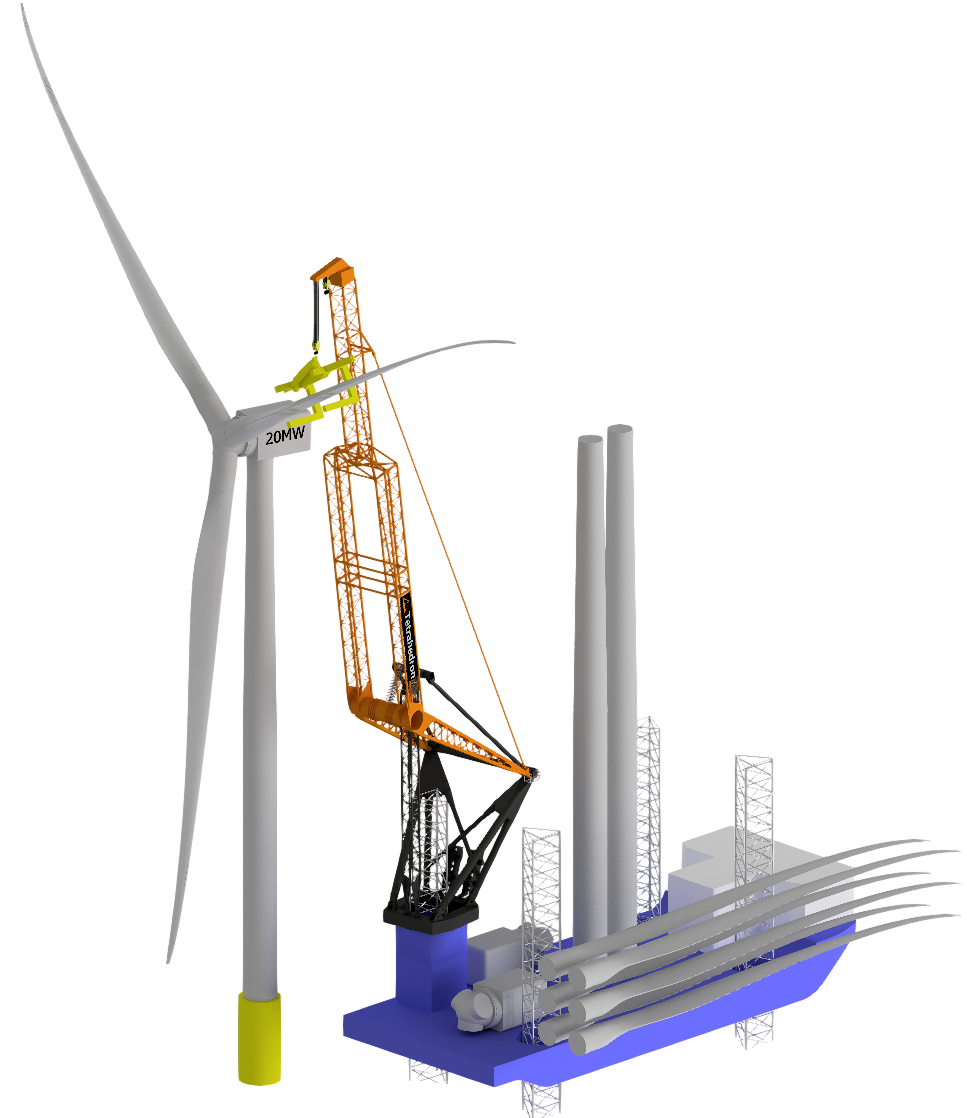 Again, this allows the assembly again to move up and down, whereby the tip section follows a circular pathway, similar to a luffing-boom type. Two electric winches with lifting hooks are finally mounted atop the upper Tetrahedron lattice-steel section for attaching and precision-installing the loads.

As an inherent safety feature, the system layout prevents the boom with load from swinging backwards and passing the vertical crane rotating axis, Stavenuiter explains. Such swing-backwards situations have occurred with luffing-boom cranes, mostly directly after an "accidental loss of load" and could cause serious damage — even to the point where the crane is lost.

The entire Tetrahedron crane system is essentially a three-dimensional mechanical structure, to a large degree composed of dimensionally stable triangles, with pivot linkages eliminating bending moments, and tension-bars whenever possible.

Stavenuiter explains: "The overall crane design is straightforward, and wherever possible we composed all elements from standard available components in high-strength steel. But because it is a three-dimensional structure, calculations are complex and time-consuming. Typical crane analysis is performed with 2D-CAD-drawings supported by spreadsheet calculations, but these would have been inefficient for Tetrahedron."

Because of this, the company wanted to develop dedicated analysis, control, evaluation (ACE) software tools capable of conducting automated calculations of all main elements, he adds. This setup also allows Tetrahedron to be very flexible and translate specific customer wishes into dedicated custom-made solutions.

The patented Tetrahedron crane innovation could thus positively contribute to the continued deployment of many early installation vessels, which typically require 20 to 25 years of active service for a sound business case. Equally importantly, it could counteract the expected future shortage of jack-ups capable of installing the next generations of turbines, with an extra 50-metre-plus lifting height the essential enabling factor.

Stavenuiter expects that retrofitting existing vessels with Tetrahedron cranes will, at least in the short to medium term, represent his company's core business based on current potential client interest.

"Manufacture and crane assembly is therefore planned to be concentrated in Rotterdam, at least for serving the retrofit market segment. This makes sense because the supply chain for new-built vessels plus matching new cranes is mainly in Asia. The main retrofit market is concentrated in Europe, with a number of main subcontractors based in Rotterdam. The US offshore market is expected to boom in the next few years too, with many 'surplus' US oil and gas vessels becoming available. Retrofitting these with Tetrahedron cranes could offer another market for us", he concludes.