The EU Strategy on Offshore Renewable Energy, published in November 2020, acknowledges that tapping the energy-generating potential of European waters — from the North and Baltic seas in the north to the Atlantic Ocean to the west and the Mediterranean Sea in the south — is crucial if Europe is to achieve its carbon-emission reduction targets for 2030 and climate neutrality by 2050.

The future of utility-scale offshore wind will have to look very different from the market in 2020 if these ambitious targets are to be achieved. At present, nearly all of Europe’s roughly 12GW of installed offshore wind capacity consists of fixed-bottom turbines.

Floating wind will allow EU countries to tap new areas of offshore-wind potential in deeper seas further from shore, where the resource is better as the wind blows both more consistently and at higher average speeds.

Other ocean renewables such as wave, tidal and floating solar photovoltaics — in their infancy today — face the challenge of scaling up but can potentially piggyback on gains achieved by more mature and cheaper forms of renewable energy. 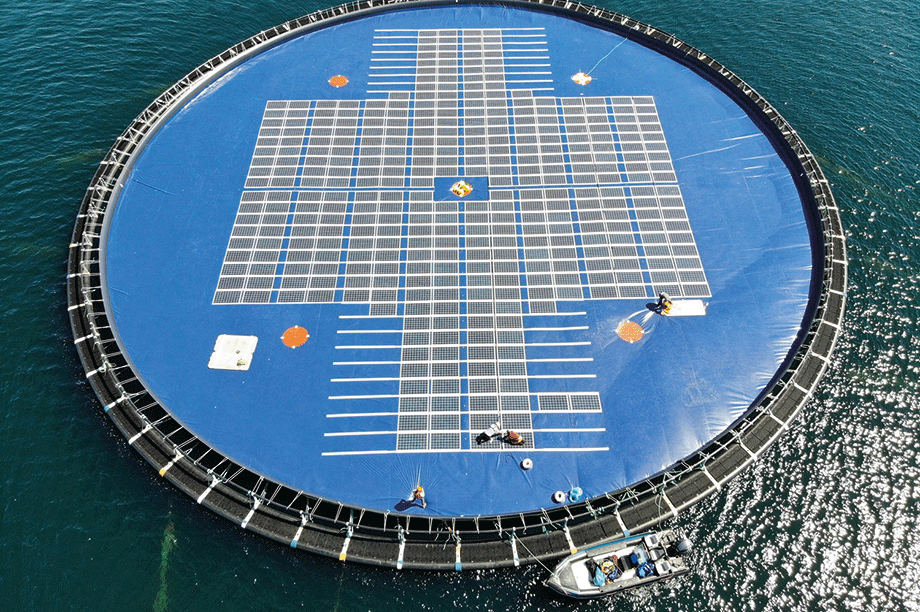 Ocean renewable technologies such as floating solar PV are still in their infancy but will have to scale up if the EU is to reach its targets (pic: Statkraft)

According to the EU strategy, non-wind ocean-based renewable-energy generation technologies could make a “significant contribution” to Europe’s energy system and industry from 2030. The document notes they can provide grid stability while helping decarbonise islands in the EU. The strategy envisages developers implementing the existing pipeline of 100MW of pilot projects by 2025 to reach commercial scale by the end of this decade.

Change is already on the way for existing methods to convey electricity produced by offshore wind farms to onshore grids. A new approach will be needed to deliver infrastructure that “optimises use of every single electron produced”, in the words of transmission operator Tennet’s CEO, Manon van Beek.

The EU’s strategy document says that member states will have to get more closely involved with these ambitious goals, as current policies would result in no more than 90GW of installed capacity by 2050.

In its December 2020 report, titled Ocean energy and the environment: Research and strategic actions, the European Technology and Innovation Platform (ETIP) concluded: “Multiple, but often simple, solutions could significantly improve consenting of ocean energy projects. For example, having a single point of contact would make it easier for developers to get advice throughout a streamlined consenting process.”
The report provides an overview of consenting procedures for a number of European countries and highlights a damaging lack of harmonisation.

Belgium and France have pre-allocated zones for offshore energy covering all types of renewables. France has a procedure for an all-encompassing permit that allows developers the flexibility to adapt, rather than define all technological choices at the start of a project.

But in other countries, such as Spain and Ireland, there are no allocated zones for ocean energy and no dedicated consenting process for ocean-energy projects.

Most offshore wind farms are connected to a single country, with cables transporting electricity to shore from the site. But plans are afoot for upscaling to multinational infrastructure. Tennet is planning a 12GW offshore hub by 2035 to connect 2GW of capacity to Denmark, 4GW to the Netherlands and 6GW to Germany.

Speaking at December’s virtual WindEnergy Hamburg 2020 event, Jochen Kreusel, market innovation manager at Hitachi-ABB Power Grids, said this type of offshore grid infrastructure hybridisation concept has advantages. “You are building power transmission infrastructure for multiple purposes... It is most likely the most efficient approach, also in terms of space usage, which will be critical as we head into the future.”

Panellists of a floating wind session at WindEnergy Hamburg agreed that floating wind could reach 4-6GW of installed capacity by 2030 and could account for one third of the 300GW needed by 2050.

If floating wind is able to overcome scale-up challenges — today around 40MW of installed floating wind capacity exists in European waters — it could potentially unlock synergies that come from combining it with other forms of renewable-energy generation.

Because a large number of floating wind farms will be built much further from shore, where the waters tend to be deeper, there will be higher costs associated with carrying out operations and maintenance, and cabling power at greater depth over longer distances.

Many of the challenges that developers and advocates of floating wind are coming up against are likely to be faced by developers of other ocean-energy technologies in the coming years as they move from demonstration projects to commercial pilots.

Donagh Cagney, policy director of industry association Ocean Energy Europe, told Windpower Monthly that he sees opportunities beyond offshore wind and other technologies sharing the same platform. There are benefits in using the same space, too.

“Wave developer CorPower Ocean is developing a wave device that can be moored between floating wind turbines, while project developer Simply Blue Energy is focused on developing combined floating wind-wave projects,” Cagney said. “Even aside from the wind-wave relationship, combining the two technologies has great potential to drive down LCoE [levelised cost of energy].”

According to Cagney, the cost aspect of these developments is very interesting. “The capital expenditure of deploying floating platforms out in the ocean is steep. This combination gives the best chance to sweat the asset and generate as much power as possible from your investment.”

Further benefits will result from additional innovation, but also additional risk, says Cagney. “European, national and regional governments now recognise the importance of reducing the risks associated with green technology innovation… there are plenty of support options available to help developers demonstrate their devices at scale, to prove the technology and generate the data needed to drive down risk.”

Wave energy company Bombora has entered into a strategic agreement with subsea services provider TechnipFMC to develop floating offshore wind and wave solutions, resulting in an integrated floating platform concept comprising an 8MW floating wind turbine and a 4MW mWave generator. The concept could potentially enter the water at a European test site in 2023. It could scale up to a 12MW floating turbine and a 6MW mWave converter to deliver 18MW from one platform, sharing the same electrical infrastructure.

Speaking at Wind Europe Hamburg, MHI Vestas’ lead developer floating offshore wind, Pablo Necochea, said: “A continental approach can be better to deliver the infrastructure. And then, when you have two or more countries invested in floating wind and pulling in the same direction, you can address other potential hurdles, like permitting processes.”

As Europe embarks on the grand challenge of achieving 340GW of offshore renewable energy by 2050, it may be time for different ocean-energy technology sectors to identify common challenges and solutions.
Efforts to facilitate projects where floating wind is combined with other ocean renewables could potentially find solutions that can benefit each technology type, for example moorings and anchors as well as cabling. Identifying port locations that are best suited to serving such projects is also important, as is optimising the use of our increasingly crowded European seas to deliver cheaper, clean energy for all. 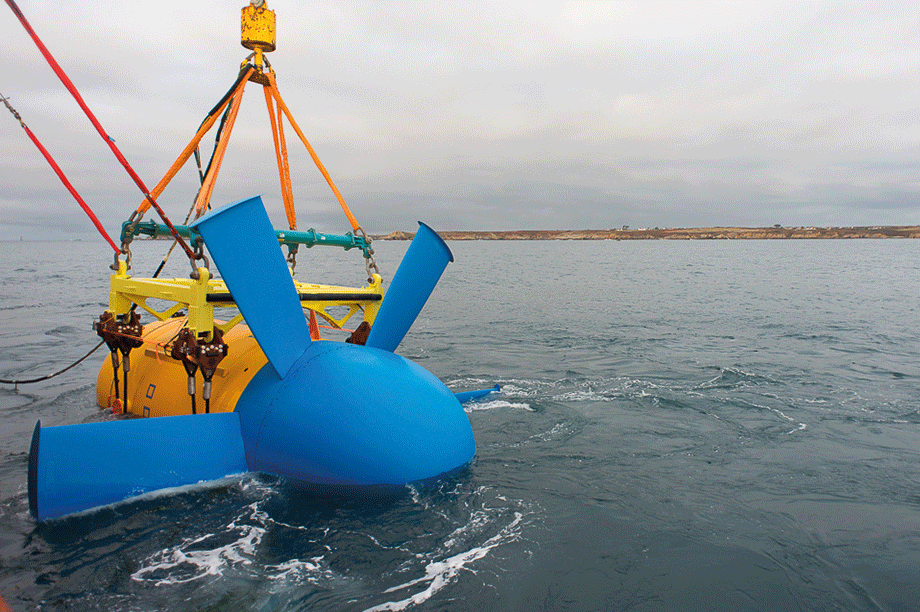 Like offshore wind, wave energy has significant potential because of the global scale of the resource. Several areas can support both technologies at utility scale. The two energy sources are highly compatible based on the natural time shift between wave and wind resource, and the ability to use shared electrical infrastructure and operations teams. Combining wave energy with wind would help reduce variability and result in higher average value per megawatt hour. (pic: Sabella)

In the UK, which formally left the EU on 31 January 2020 and severed all remaining ties as of
1 January 2021, more than 10GW of offshore wind is already in operation and the development pipeline exceeds 50GW.

Speaking at WindEnergy Hamburg 2020, the head of offshore at the Department for Business, Energy and Industrial Strategy (BEIS), Yuen Cheung, said developers in the UK are already coming up against cumulative impact issues around birds, noise and radar, even without factoring in future new uses of the sea.

In conjunction with seabed landlord the Crown Estate, BEIS has set up an offshore-wind evidence and change programme to bring stakeholders together — from NGOs to developers and statutory conservation bodies — to examine barriers in the marine environment and identify more strategic approaches.

As a leader in offshore wind, the UK has learned many lessons. But much more remains to be done if it is to hit its own target of 40GW by 2030, to include 1GW of floating offshore wind.

In May 2020 wave-energy firm Bombora began a project with the ORE Catapult’s Marine Energy Engineering Centre of Excellence (MEECE) to investigate the feasibility of co-locating its mWave device with floating-wind structures. 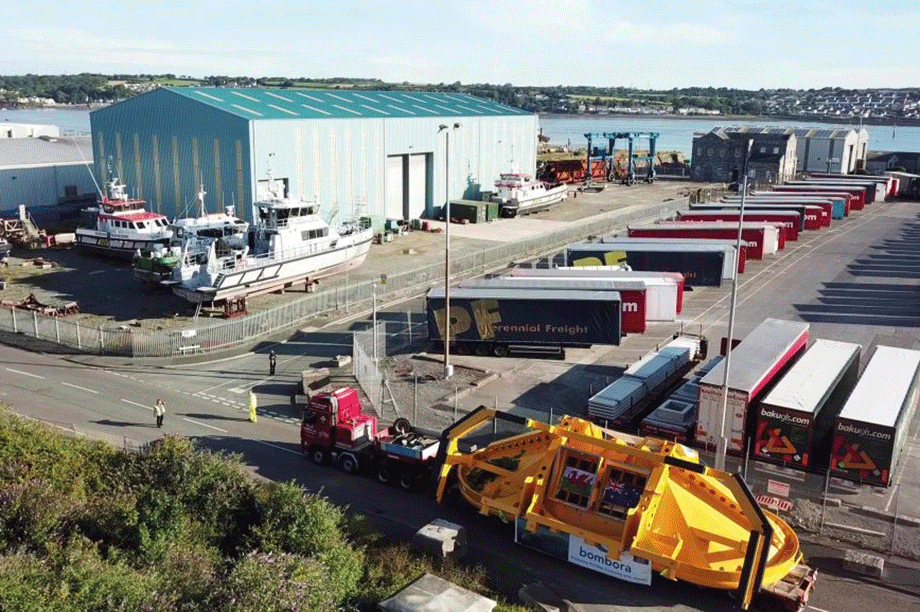 Bombora’s 1.5MW mWave Pembrokeshire demonstration project will be installed off the Welsh coast in the first half of 2021

MEECE programme manager Paul Ellsmore said: “This project cuts right to the heart of two important areas for innovation in offshore renewable energy right now: the development of wave energy and floating wind… To unlock the potential of co-locating these two technologies could be game-changing for the sector.”

According to Ellsmore, Wales is an ideal location for combined wind and wave projects as it is home to wave and tidal developers, as well as a prime location for floating-wind development.
Industry association Marine Energy Wales said its marine energy test area in Pembrokeshire offers developers the opportunity to develop these projects.

Through multifunctional installations such as combining floating offshore wind with wave energy converters there is an opportunity to increase the capacity of offshore installations without a large increase in the footprint, with the potential to reduce LCoE and variability of power generation,” a spokesperson said.