In 2019, wind overtook hydro to become the largest source of renewable energy in the US. The 105,591MW that were operating at the end of the year, generated 300TWh, contributing 7% to the country’s electricity supplies.

The corresponding figures for utility-scale solar PV were 45,761MW of capacity, 72TWh generation, accounting for 2% of electricity supplies. In addition, there was 15,853MW of residential solar PV and 14,330MW of commercial PV.

The costs of utility-scale solar PV are falling very rapidly, as shown in the cost comparison graph — below, left — based on data from reports by the Lawrence Berkeley National Laboratory. The wind report was reviewed in the October issue, and the solar report was published shortly afterwards. This suggests that, on average, large-scale solar PV is about to undercut wind energy costs.

The costs of energy from PV have fallen dramatically over the past ten years, from $226/MWh in 2010 to $45/MWh in 2019. As with wind, this was due to a combination of lower capital costs, higher capacity factors and lower operation and maintenance (O&M) costs.

Berkeley Laboratory’s estimate of the average cost of wind energy in 2019 was $36/MWh, but the gap is narrowing rapidly.

The data shown in the cost comparison graph, below, show overall averages and there are significant variations about the mean. The 2019 estimates for PV, for example, range from $28/MWh to $105/MWh. These variations are due to differences in construction costs, to the level of solar radiation and also to project size. Economies of scale have a strong influence on installed costs and large projects can be built at lower cost. 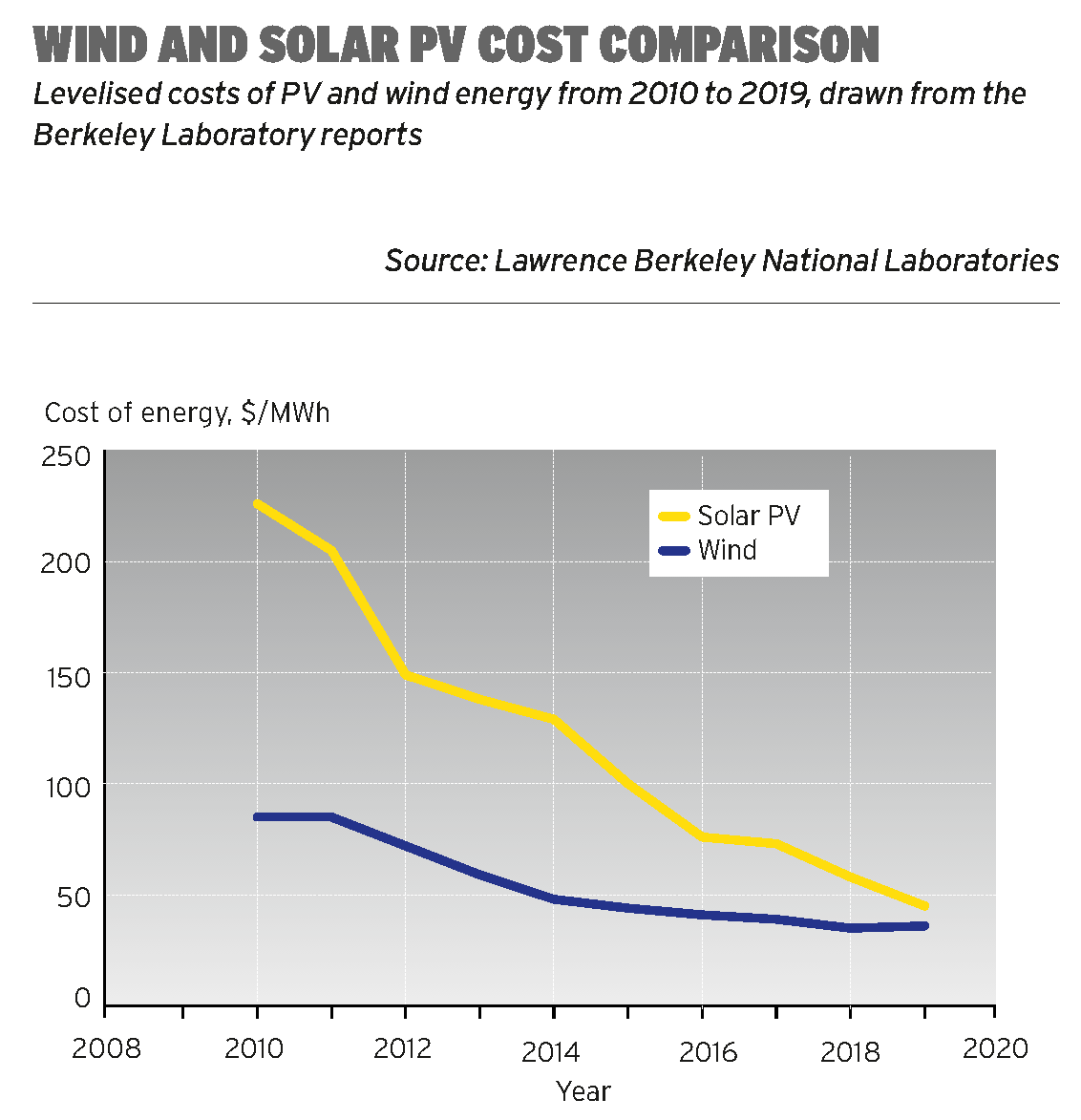 Although the average installed costs for PV and wind were very similar, the productivity — measured by the capacity factor — of PV was only a little over half that of wind (see chart below). 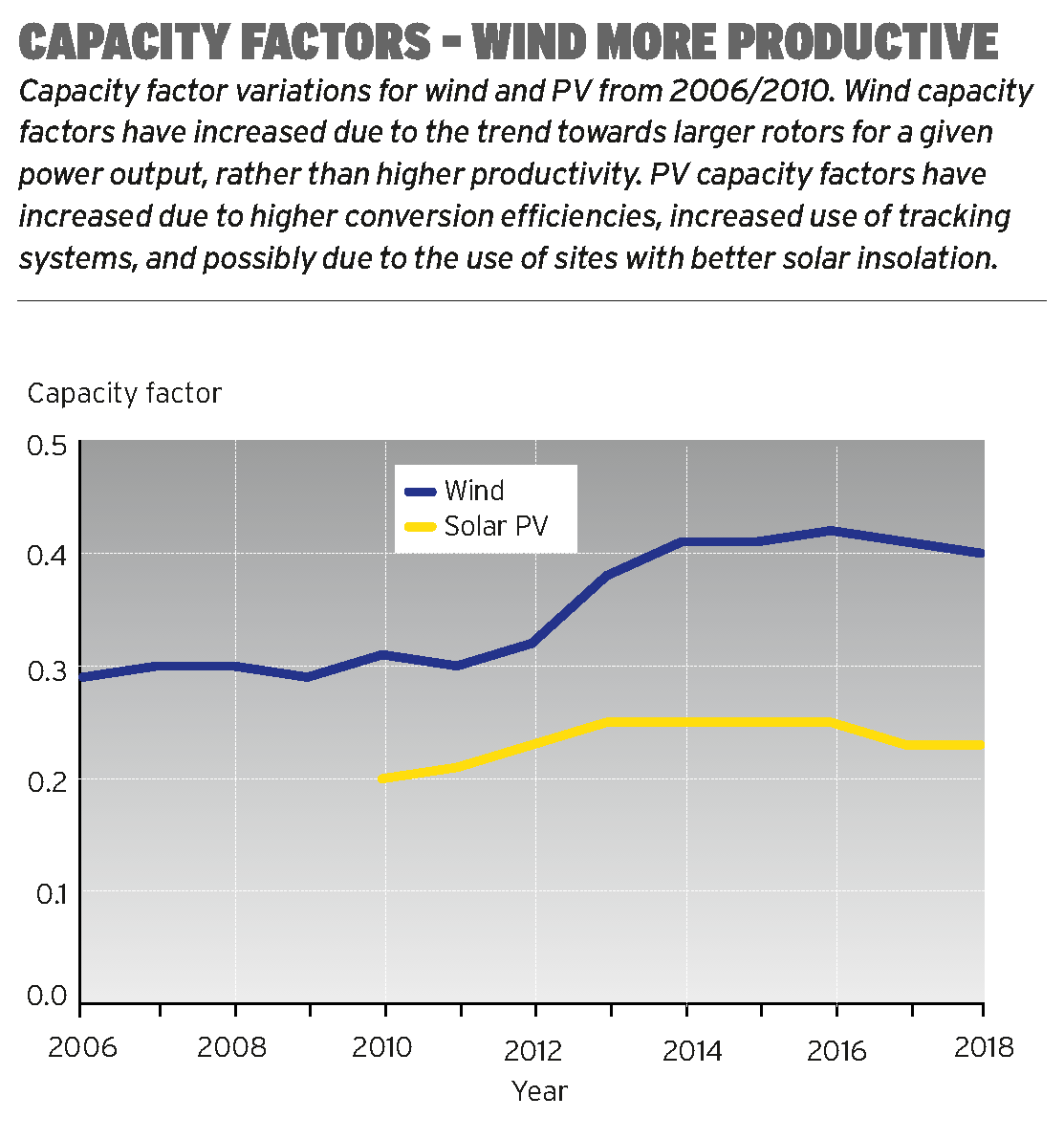 One of the factors that will influence the rate at which the costs of energy fall is how quickly the technologies continue to develop.

The Berkeley Lab PV report includes a projection up to 2025, when utility-scale PV may reach 129GW. This does not include commercial and residential-scale PV which, by that time, could reach 63GW.

The corresponding report for wind did not include a projection, so two estimates are shown, one from the US Department of Energy’s (DoE) Wind Vision report, and one from the International Energy Agency’s Renewables 2020 report. These two reports give very similar estimates, suggesting wind capacity will reach 165GW by 2025, and the DoE suggests capacity will reach 224GW by 2030. 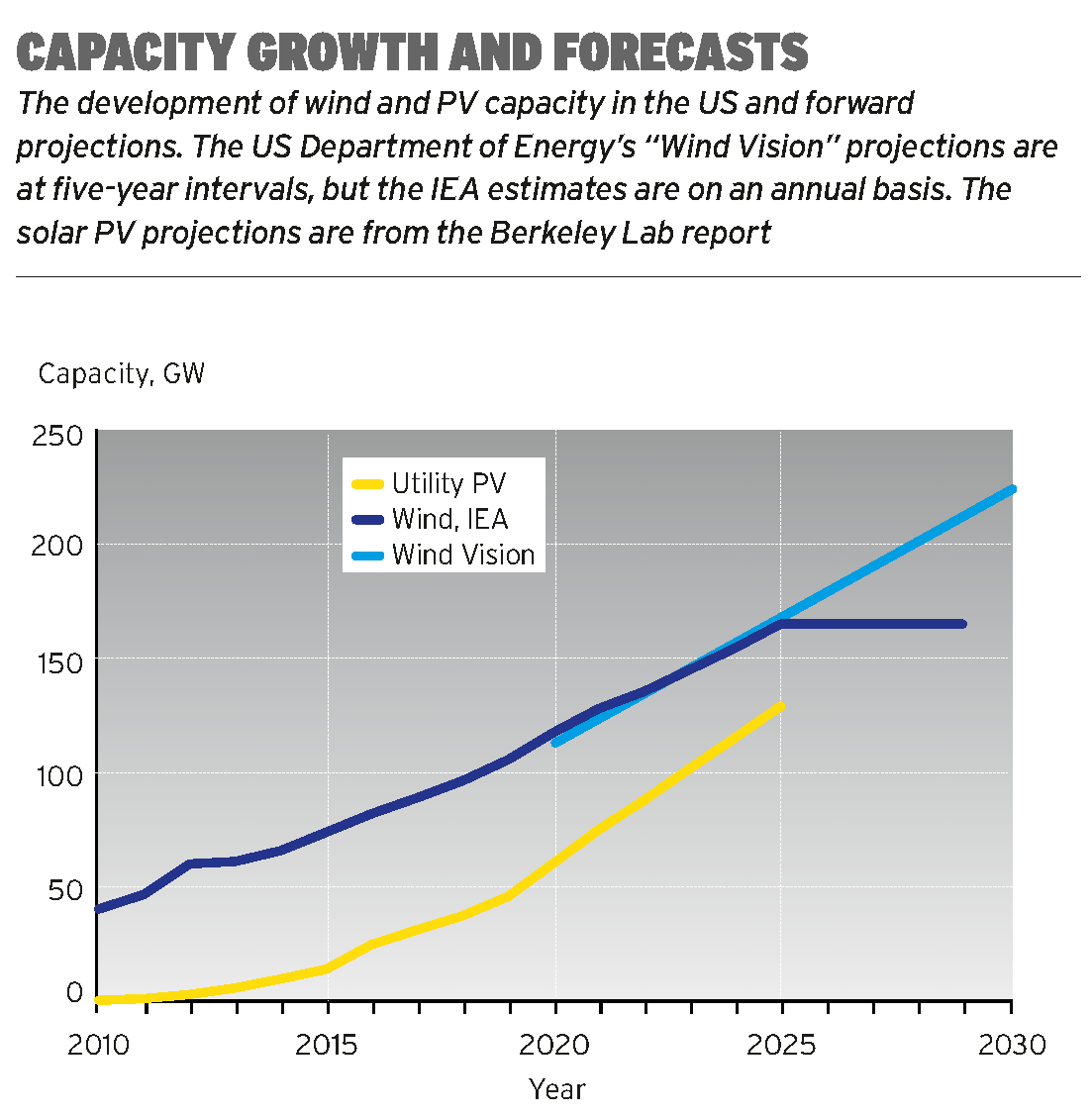 The DoE Annual Technology Database suggests the levelised cost of onshore wind will only fall slowly in the years ahead, but solar PV, by contrast, continues to fall

At a glance This month’s report conclusions