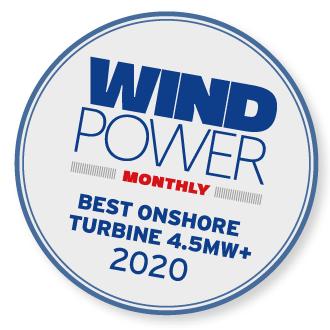 The installation of the 4.6MW E-160 EP5 E1 prototype in July was the most important milestone for Enercon in 2020. However, it is only a stepping stone in the German company’s mission to reshape itself and its product portfolio for current and future global demands.

When Enercon acquired Lagerwey in late 2017, the small Dutch supplier operated two “compact-drive” L136-4.5MW prototypes with a passive-cooled PMG without fans and pumps. This prototype became the core technology basis for Enercon’s EP5 platform, with the new E-147 and E-160 models announced less than a year later. In parallel, a new, largely global supply chain had to be (re)developed.

The E-160 E1 is a comprehensive product advancement, alongside the 38% rotor area increment and the 5.5MW E-160 E2 upgrade already planned for Q1 2021. The enhanced E-147 E1 and E-160 E1 PMG layout could be retained for the E-160 E2 by reusing the generator thermal reserves and the outer diameter of less than six metres, which is critical to avoid road-transport problems.

Another major step for 2021, involving both the EP3 and EP5 platforms, is the E-nacelle. An extended nacelle rear section will accommodate the full electrical system, including converter(s) and the MV-transformer.

A large share of the planned projects that will feature Enercon turbines worldwide are to be fitted with the E-160. It also represents the primary design basis for future PMG-based direct-drive models with higher nominal power and yield potential.

The 5.X platform is the outcome of a collaborative international development effort involving benchmarking and best-practice technology choices. One of its new features is a compact main bearing unit enabling mass and cost reduction benefits while retaining a proven non-integrated high-speed geared drivetrain with DFIG.

A prominent feature offering multiple benefits is the offshore-proven transformer room with a compact oil-cooled transformer located underneath the nacelle, behind the tower. The cumulative order intake for the 5.X platform exceeded 1.15GW within six months of its launch.

Back in 2012, Vestas realised the need for — and the benefits of — a new global modular turbine architecture. It introduced the ground-breaking medium-speed EnVentus technology principles in January 2019, together with two onshore sister models.

The V162-6.0MW flagship prototype installed in October 2020 has one of the largest onshore rotors and is the second EnVentus prototype after the 5.6MW V150-5.6MW. Both were upgraded to 6.0MW at the same time, now the standard platform rating.

With the EnVentus platform, Vestas has propelled medium-speed drivetrain technology into the onshore mainstream market. Only MingYang of China is a competitor at present with its hybrid drive technology. It is expected that more suppliers will switch to medium speed in the future.