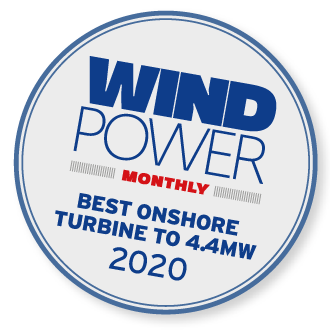 Goldwind’s GW 82-1.1MW targets China’s repowering market. It is an unusual product in that it goes against the dominant trend for turbine sizes to increase in order to cut the levelised cost of energy (LCoE). The GW 82-1.1MW is a downrated version of the GW 82-1.5MW model — part of the popular 1.5MW series with more than 18,000 installations including 2MW-plus platform upgrades.

The turbine comes with flexible ratings of 0.85-1.1MW, corresponding to specific power ratings of 161-208W/m2. The drive for such specifications came from a decision by the Chinese government to discontinue state subsidies for onshore wind from the end of 2020. This represents a huge challenge and requires an urgent reduction in LCoE, according to Goldwind, and fitting very large rotors is a concrete measure to achieve this.

Product development milestones include design certification in March, followed by prototype installation in April and type certification in May. The prototype was put up and connected to the grid in just 15 days, and Goldwind started delivering turbines 41 days after they were ordered. The first two orders are for projects in north-east China; construction has started at one of them.

The V155-3.3MW, with an enhanced 155-metre rotor and a reduced power rating of 3.3MW (175W/m2), is the clever latest 4MW platform addition, designed to optimise annual energy production (AEP) in low and ultra-low wind markets such as India and China. In an unusual twist since introducing the V112-3.0MW model in 2010, an enlarged rotor is combined with a reduced rating.

Speaking to Windpower Monthly about the benefits of modularity, Vestas’ CTO Anders Nielsen said: “This new model variant was created to a large extent reusing similar-range components and systems.” The V155-3.3MW shares the geometrical shape of the inner blade with the V150, allowing partial mould reuse, for instance, and all 4MW variants have a similar root diameter.

BRONZE Enercon E-138 EP3 E2
The EP3 and EP5 are crucial to Enercon’s five-year technology transition process and new volume platforms. The E-138 EP3 for low and medium wind speeds is the main model, with some 160 units installed and more than 500 new orders taken.

Like the 4.0MW E-126 EP3 and the latest high-wind 2.99MW/4.2MW E-115 platform, the E-138 features a segmented externally excited generator. The nacelle comes in three modules. The EP3’s rapid technology evolution is shown by the E-138 E3 incorporating an extended E-nacelle with uptower power electronics. A prototype is planned for Q4 2021.

Wind cluster will be capable of delivering nearly 1% of Finnish electricity production when completed, developer claims