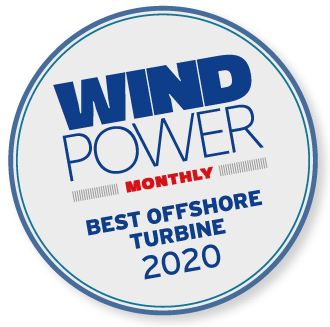 When aerodyn-engineering founder Sönke Siegfriedsen presented his radical 15MW concept in 2017, he hoped “to realise a market-ready floating power plant by 2025 or earlier”.

Nezzy2 is fitted with 180 sensors for system behaviour verification. The validation of the measuring data was aligned with the calculation results, says Siegfriedsen. Nezzy2 further showed what he calls “calm swimming stability” under scaled hurricane conditions with 3-metre wave heights — equivalent to 30-metre waves at full scale, together with a favourable maximum inclination of six degrees.

In August 2020, certification body DNV GL awarded Nezzy2 a statement of feasibility, involving evaluation of all technical systems and solutions. This gave the company the confidence to proceed with full-scale installation.

EnBW is co-financing this development. The German utility has secured the licensing rights for Europe and the US, and will work with aerodyn on the further development. EnBW earlier carried out a comprehensive scan focused on five areas: technology readiness; risk and requirements; Capex with structural mass a key indicator; Opex; and port capability including (de-)installation and cable connection. Nezzy2 is at technology readiness level 5.

GE’s 12MW–14MW Haliade-X direct-drive prototype became operational in November 2019 at the port of Rotterdam’s Tweede Maasvlakte industrial area. In October 2020, the US supplier announced the prototype had been optimised to a 13MW power output.

GE said in October 2020 that the release of a type certificate was due “in the coming months”. Serial production is scheduled to start in the second half of 2021 in Saint-Nazaire, France. An uprated 14MW version was announced in December.

The SG 11.0-200 DD upgrade with ramp-up scheduled for 2022 is an important intermediate model that further narrows the gap with GE’s Haliade-X. Firm orders and preferred supplier agreements for 2.6GW have been made. SGRE has an impressive total of more than 1,000 direct-drive turbines, with a next-generation SG 14-222 announced.