According to analysis compiled by Norwegian consultancy Rystad Energy, Asia has grown from practically zero offshore capacity in 2015 to more than 6GW today.

Fuelled by China's growth, by 2025, the region’s installed capacity is expected to grow sixfold to 52GW — almost on a par with what Europe is expected to reached by then (see chart). At present,  China accounts for more than 94% of Asia’s current operational offshore wind capacity — 5.9GW of the 6.3GW total. 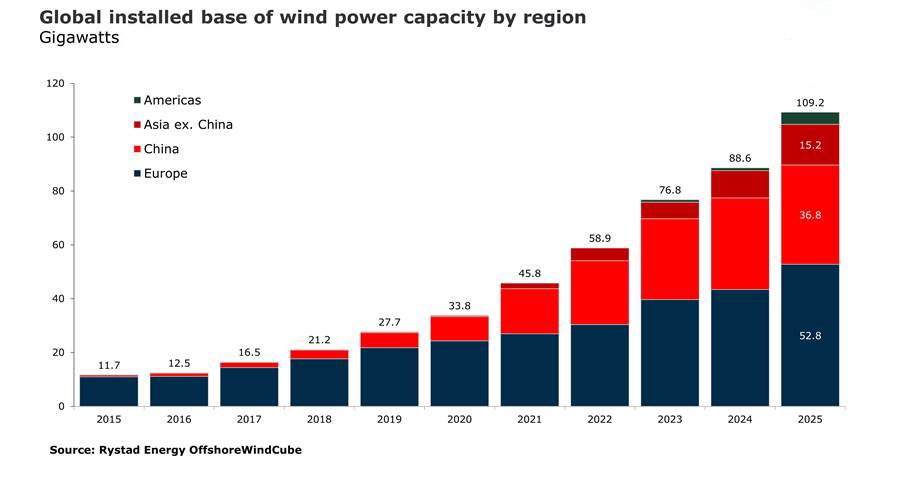 The Chinese government is phasing out its offhore feed-in-tariff after 2021, which Rystad Energy believes will create a rush of large projects moving through the construction pipeline. For those that miss this deadline, the consultancy anticipates many developments will have already reached a critical point in the construction process and so will accept a slightly reduced feed-in-tariff.

Under this scenario, Rystad Energy expects offshore wind development in China to continue rising substantially before slowing down in 2025. However, China will still lead the sector's growth across Asia Pacific, although its share of installed capacity is forecast to decline from 94% to about 70%.

In China, only Siemens Gamesa has managed to enter the market, if indirectly through a licensing agreement with Shanghai Electric, while Chinese turbine manufacturers such as MingYang and Goldwind dominate installations.

However, Taiwan and Vietnam are predicted to put forward “substantial volumes” of offshore capacity in the short to medium-term. According to the analysis, Taiwan’s offshore capacity is expected to ramp up significantly due to opportunities for non-Asian developers and suppliers.

And by 2025, Vietnam is expected to reach around 6.1GW of capacity with the lion’s share (75%) coming from intertidal projects — wind farms that are offshore by definition but are located very close to shore and in shallow waters.