New partners RWE and Equinor have joined the NortH2 consortium to strengthen one of the largest and most “ambitious” green hydrogen projects in Europe.

Shell, Gasunia and Groningen Seaports launched the NortH2 consortium was earlier this year to develop a centre for green hydrogen in the northern region of the Netherlands.

Members of the group want to establish a system of offshore wind farms, electrolysers, gas storage and pipelines, to convert offshore wind power into green hydrogen as well as to store the power and transport it to industrial centres in north-west Europe.

The plan would build 4GW of capacity towards the EU target of installing at least 40GW of hydrogen electrolysers across Europe by 2030.

The NortH2 group's capacity could eventually be scaled up to more than 10GW of capacity by 2040, producing one million tonnes of green hydrogen yearly – more than the Netherland's current total hydrogen production, according to the Netherlands Organisation for Applied Scientific Research think tank.

It would be stored and transported using Gasunie’s existing natural gas infrastructure for storing and transporting the hydrogen.

Roger Miesen, CEO of RWE Generation said: “NortH2 is one of the most ambitious hydrogen projects in Europe. As a new partner, RWE will contribute its broad expertise to create a powerful infrastructure for green hydrogen in Northern Netherlands.

“We are the world's second-biggest operator of offshore wind farms and have experience in the field of electrolysers, making us the ideal partner for NortH2.” 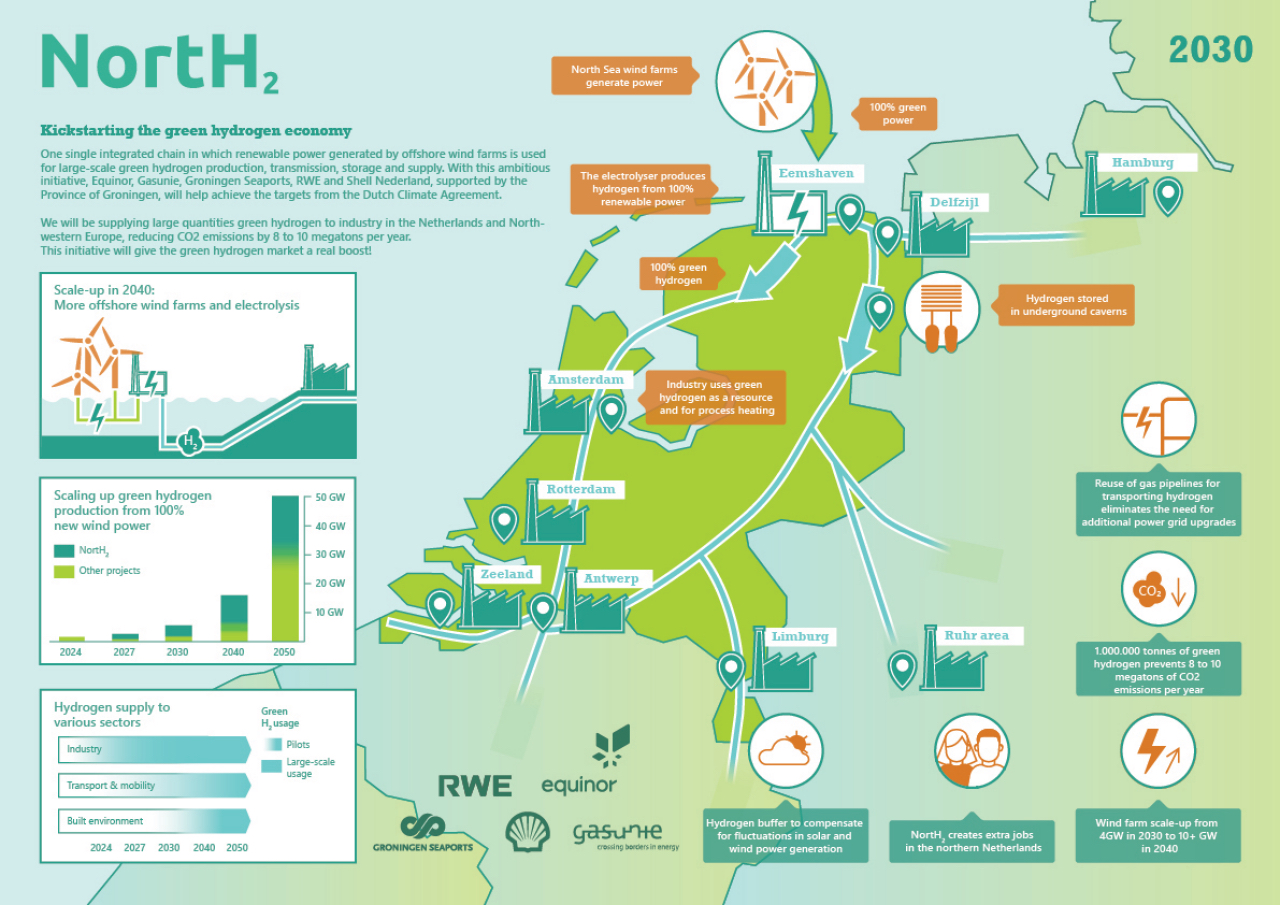 The project partners are carrying out a feasibility study that runs until 2021. If this proves positive, initial development activities could begin in the second half of next year.

Equinor joins the group with the aim of improving its competitive position in hydrogen while creating future value and possibilities for industry.

Anders Opedal, Equinor CEO, said: “This is a groundbreaking project that Equinor is looking forward to contribute to. The project can be an important part in our efforts to build a competitive position in hydrogen, creating future value and industrial possibilities.

“Our aim is to be a net-zero energy company by 2050 and developing a profitable low carbon value chain for hydrogen will be an essential part of our transition to become a broad energy company.

“Hydrogen will be key to decarbonisation and net-zero efforts for the energy market, especially in otherwise hard to abate sectors which cannot be served by electricity.”

The existing natural gas infrastructure is extensive and could be used for storage and large-scale transport of hydrogen.

In turn, there are large industrial centres in the Netherlands and Germany as well as heavy-duty vehicle OEMs that could leverage a ‘first mover’ advantage.

Eitrheim said: “Hydrogen will add to the competitiveness of renewables in the years to come, by adding value and an alternative route to market for renewables. The development of viable large-scale clean hydrogen value chains twill help meet the Paris agreement targets.”