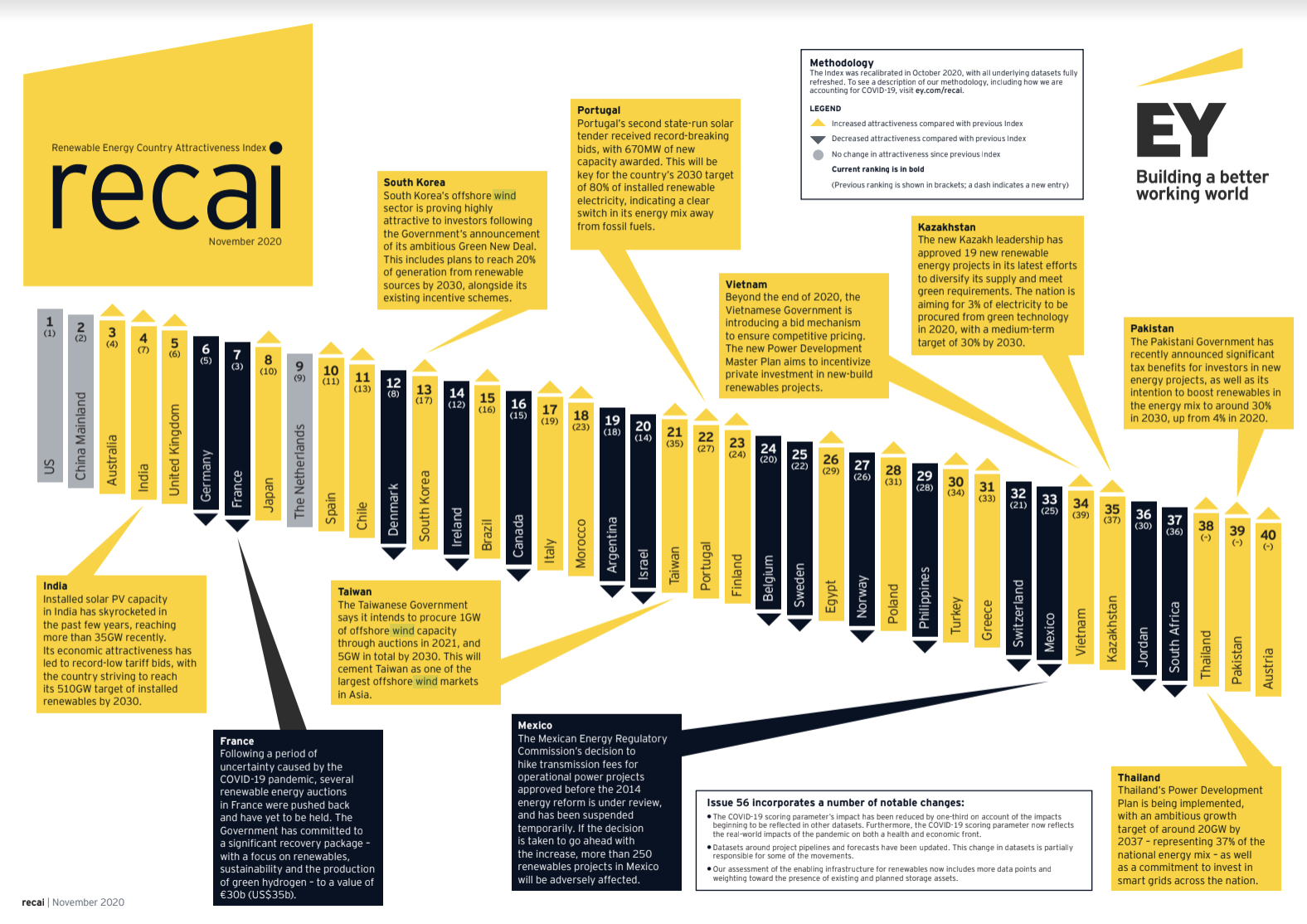 The US and China have retained the top two spots in EY's renewable energy country attractiveness index (Recai), while the advisors say hydrogen and artificial intelligence (AI) are set to play a vital role in scaling up renewables.

As Australia rose to third, the UK leapfrogged Germany into fifth on the index – boosted by a commitment to large-scale offshore wind projects and government proposals to invest £350m to cut carbon emissions.

EY ranked the US the most attractive onshore wind investment market ahead of the UK, Finland, France, China and Australia.

Meanwhile, it ranked the UK as the most attractive offshore wind investment market ahead of the US, China, France, Japan and Germany.

As part of its analysis, the 56th Recai report also looked at the critical role to be played by hydrogen and AI in supporting grid stability.

EY projects converting excess renewable electricity into hydrogen to be a “game-changer” that would create a chemical battery with greater storage capacity.

And the share of renewables used in the energy mix in most countries soared amid the Covid-19 lockdown measures in early 2020.

Since then, the “economic recovery rhetoric” from global leaders about the growth of the green economy has remained consistent, alongside a fresh push towards net-zero targets.

“Further, the impact on economies across the globe seems to have accelerated the drive to net-zero and refocused investors’ minds on the environmental, social and corporate governance (ESG) agenda and resilience in their investment portfolios.

“This highlights the tremendous potential for renewables, and while one of the major barriers presented is grid stability, there is a surge in technological innovations to help address this challenge”.

The UK has risen to fifth, boosted by its ongoing commitment to net zero emissions by 2050, with a scheme that includes £140m ringfenced for industrial hydrogen, carbon capture and storage projects.

The UK has also continued it’s commitment to large-scale offshore wind projects, with an offshore wind-only auction due to be held next year.

Warren added: “With a verbal commitment from the UK government to support wind power, backing up the rhetoric with a well thought through industrial policy could put the UK at the forefront of one of the most exciting and transformative industries in the world.

“Energy storage, the decarbonisation of heat and transport, and intelligent energy management and trading capabilities to support the transition to net-zero are just some of the areas where the UK has strength and expertise. All of this would benefit from a more cohesive and strategic energy and environmental plan.

“Continued backing for the UK offshore wind industry, a world leader in its own right, is a good place to start, but this is just the tip of the iceberg. Support and commitment across the whole of the renewable energy mix are needed if the UK is to meet its low carbon targets.”

The US remains top of the Recai table, boosted by significant Covid-19 stimulus packages for renewable energy projects and an incoming administration that has committed to rejoining the Paris Climate Agreement.

Chinese renewables have been lifted by its solar sector, which remains buoyant despite Covid-19, and placing it in the second position on the index.

Australia has reached third, representing its highest ever position.

EY advisors say this is mostly down to developers and investors pushing renewed growth in Australia’s renewables sector.

While policy uncertainty remains an issue around grid stability and price volatility, Australia is tipped as a potential “green energy exporting superpower”.

Record-low tariff bids have led to the country revising its installed renewables target up from 172GW in 2022 to 510GW by 2030.

Germany came sixth in light of support for its offshore wind sector, the development of green hydrogen, and a commitment to end coal-powered generation by 2038.

Arnaud De Giovanni, EY global renewables leader, said: “The recovery from the Covid-19 pandemic presents the energy industry with an opportunity for green and sustainable growth.

“There will no doubt be challenges in the short term, but renewables are well equipped to seize the opportunity. Energy leaders must take the lead in a coordinated effort across industries and leverage technological innovations toward enabling this sustainable future.”