A new analysis commissioned by the Dutch government looked at generation cost estimates for wind, solar and nuclear by 2040, comparable to the UK government’s review of electricity generating costs discussed last month.

The UK report concluded that, by 2040, onshore wind would cost around €48/MWh, offshore wind around €44/MWh, both slightly more then solar at about €36/MWh. It did not deal with nuclear, but noted that there was an aspiration to reduce costs by 30% by 2030, which would lead to a generation cost around €77/MWh. It then went on to derive “enhanced levelised costs” that include system costs which pushed the costs of onshore and offshore wind up to around €70-€80/MWh with solar a little less.

The Dutch government is considering building new nuclear capacity — either a large power station, similar to the design now being built in Britain, or “small modular reactors” (SMR), which are the focus of considerable current discussion in Europe and elsewhere.

The Dutch report derived similar generation cost estimates for onshore and offshore wind, a slightly higher figure for solar PV, while the estimates for both nuclear options were around €75/MWh, with the SMR slightly cheaper.

However, when system costs were added , the cost of onshore wind rose to around €80/MWh, offshore wind to just under €100/MWh and solar PV to €110/MWh.

The similarity between the British and Dutch estimates of renewable generation cost — both with and without system costs — is largely a coincidence.

The UK study assumed that capital costs would fall between now and 2040 — slightly in the case of onshore wind, more quickly for offshore wind — but the corresponding Dutch estimates are somewhat higher, as shown in the chart, below. However, a higher interest rate was used to calculate the cost of energy for the UK report, and the differences in approach roughly cancel out. 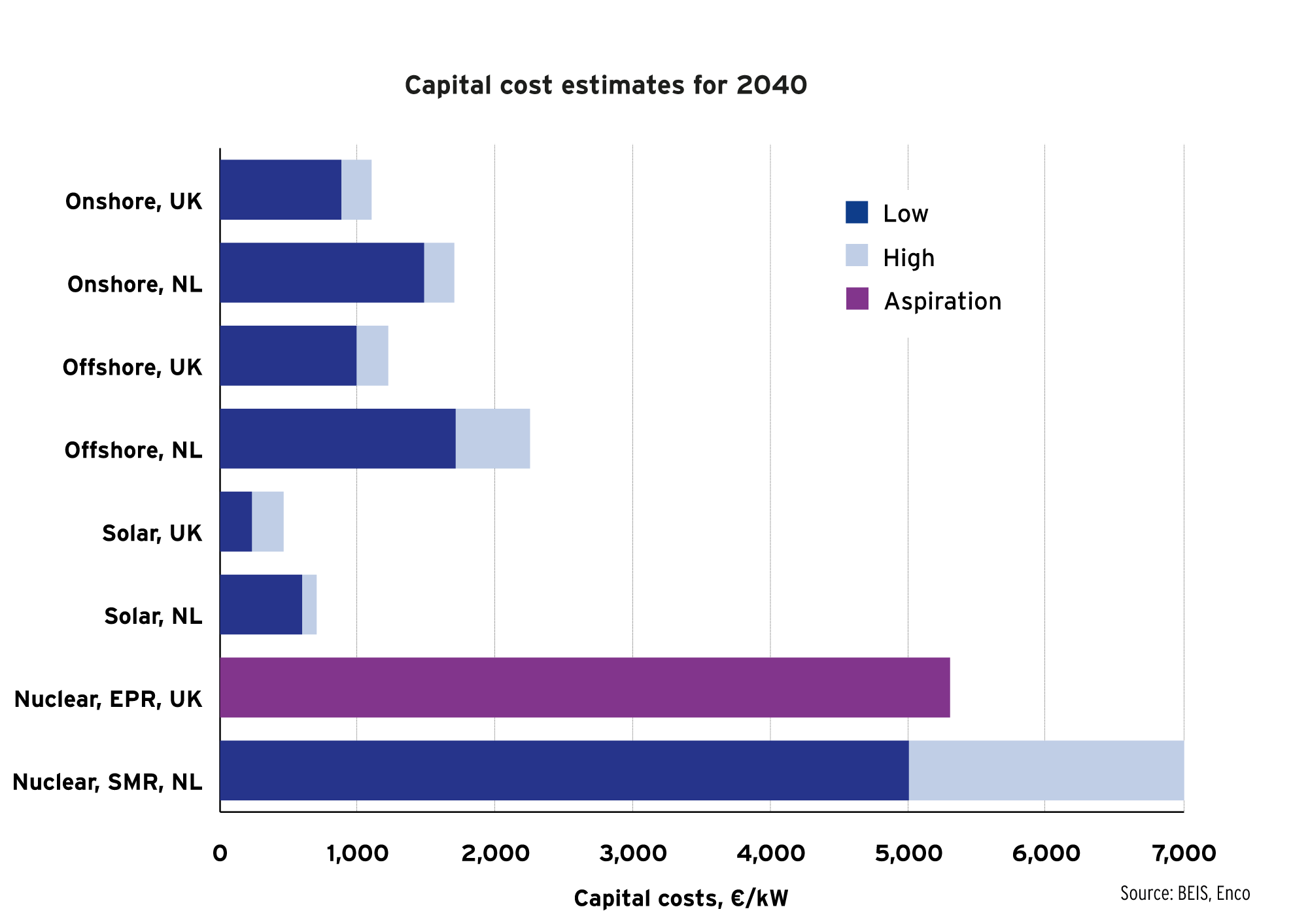 The capital cost assumptions are shown in the chart, with the Dutch estimates somewhat higher. The nuclear cost estimates were similar, with the Dutch figure for a European pressurised reactor (EPR) slightly more expensive than the small modular reactor (SMR). The UK nuclear estimate is an “aspiration” and not backed up by any firm quotation.

Although there is now little doubt that the generating costs of wind — both onshore and offshore — are cheaper than new nuclear build, estimates of the system costs vary considerably, with high end estimates routinely being quoted by nuclear advocates to advance their cause.

There are no agreed definitions for these costs, which have a number of components. They have been summarised in a paper by authors at Imperial College and include:

System costs — particularly the first two items — are not unique to renewable sources. The Imperial College authors use three different methods to calculate system costs for the mainland UK (GB) system and so there is a range of estimates.

Their results, alongside those of the Dutch report and the UK BEIS report, reviewed last month, are shown in the chart below. 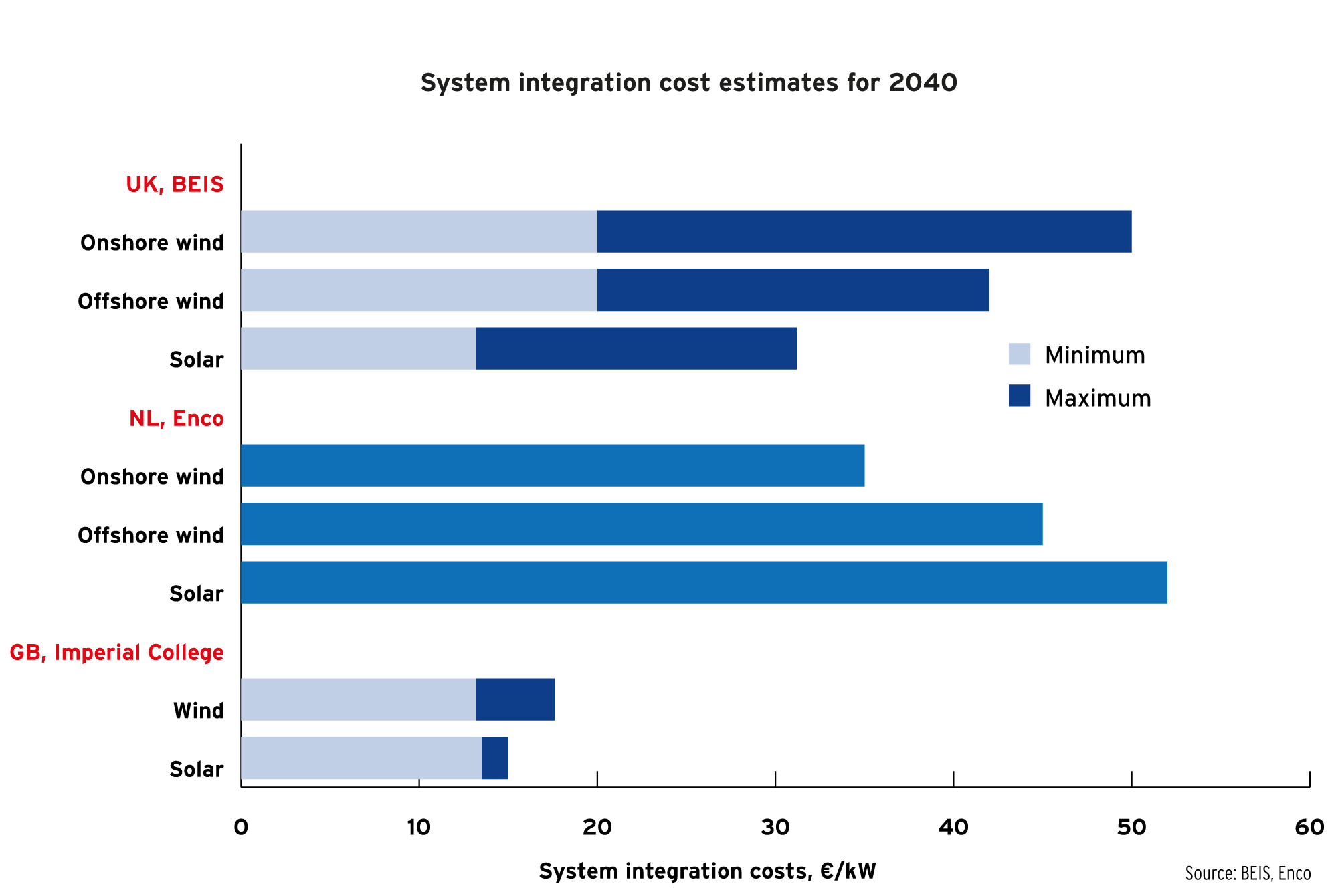 The studies all apply to a system where wind energy supplies around 50% of the total demand and the Imperial College study notes that the extra costs are significantly less at lower penetration levels.
System costs vary considerably and depend on the configuration of the electricity network, the amount of flexible plants, the amount of storage and of demand-side response.

The BEIS study looked at a number of scenarios and this accounts for the wide range. Nevertheless, the difference between the Imperial College estimates and the other two suggests there is a need for further examination of this important issue.

Possible role of nuclear in the Dutch energy mix in the future, Enco (Netherlands), 2020 Projections of wind, solar and nuclear costs for 2040, including estimates of system costs