At last month’s China Wind Power 2020 event, Goldwind presented two new onshore sister models with some of the wind industry’s largest rotors: the GW165-3.6/4.0MW turbine for low- and medium-wind speeds and the GW165-5.XMW for medium to high-wind conditions, aimed at international markets,

A prototype for the 3.6-4.0MW GW165 is planned for early 2021, but no prototype installation details have been made available yet for the 5.X version.

The longest — 80.8-metre — blades fitted to the GW165 series still come in a single piece, but Goldwind is also actively looking into segmented solutions, with comparative levelised cost of energy (LCoE) performance as the main design driver.

All blades for current Goldwind turbines are in-house designs but outsourced to third-party manufacturers, according to Zhai.

The same process applies to the outer-rotor permanent magnet generator (PMG) standardised designs. These come in single-piece (stator and generator-rotor) assemblies for all current onshore models. However, for enhanced 6.XMW future onshore ratings with larger, slower-turning rotors, this might become a larger-diameter design split into two 180-degree segments to enable easier road transportation.

Goldwind is also working on a new tower concept — a full-steel hybrid tower with a 160-metre hub height. Zhai: “It consists of a coning wide-base lattice-steel bottom part that is post-tensioned via cables, combined with two slender tubular-steel sections atop.

“We partnered with a Chinese technical university for this tower design, which is now in the prototype stage (right). An enhanced 165-metre-plus variant is in development, and we do not know exactly at this stage whether size-related technical or other limits will ultimately emerge first in the future.”

Turbine loads including wind shear, installation challenges, and tip-height restrictions imposed by the military could be among possible factors limiting continued size increases for onshore turbines in China.

Further uncertainty comes from the looming end to state subsidies for onshore wind from 31 December 2020, which overshadowed the launch of Goldwind new models at China Wind Power in October, Zhai points out.

In his view, this loss of support represents a huge challenge for all suppliers active in China and requires driving down wind power LCoE fast and decisively. “To tackle this challenge with dedicated solutions, we developed an internal future technology agenda called GP21. One concrete measure we have already taken to address this new zero-subsidy challenge is fitting very large rotors in the onshore portfolio.”

Zhai says there are huge new opportunities for future wind power in China arising from two recent announcements on climate policy. The first is the Chinese government’s declared peak in CO2 emissions by 2030, the second opportunity is the country’s aim to reach carbon neutrality by 2060. These targets will require massive overall efforts, with the wind industry delivering much larger future turbine volumes, together with matching all LCoE-reducing requirements.

The only onshore-dedicated GW2S platform consists of six model versions, including the bestselling GW140-2.5MW, a more recent GW150-2.8MW with a record-low 158W/m2 specific power rating, and the latest GW150-3.0MW portfolio addition.

The total order intake for the more recently launched “4S” GW155-4.5MW model (June 2019 prototype, below) is reported to already exceed 700 units in orders.

Goldwind’s GW3S platform remains a popular product for both onshore and offshore application in China, accounting for a considerable share of the 1,380MW the company installed offshore by the end of 2019.

The first offshore-dedicated 6MW direct-drive prototype with 150-metre rotor diameter developed for medium-wind IEC III sites installed in 2014 was an upgrade from the original 2.5MW design. The current offshore-dedicated GW 6S/8S platform portfolio comprises four main models, including the GW175-8.0MW for IEC I and the GW171-6.45MW turbine for IEC II and typhoon-prone conditions.

The GW171-6.45MW turbine is for IEC II and typhoon-prone conditions

The latest GW184-6.45MW platform addition with power modes up to 6.7MW is certified for low- and medium-wind sites with mean wind speeds up to 8m/s.

Zhai said: “The GW184-6.45MW prototype was installed in late 2019, and already has a 600-700MW order intake. The GW175-8.0MW rotor size will be enhanced in the future, and we have moved the full electrical system inside the nacelle. This reduces installation time and limits cable transport power losses down the tower.”

Goldwind is also in the early stages of looking into 10MW-plus turbines, but Zhai stresses that the final serial product will not necessarily be rated at 10MW-plus. One major uncertainty and main deciding factor is what might happen when the current state subsidy scheme for offshore wind ends next year on 31 December – a year after the onshore equivalent. 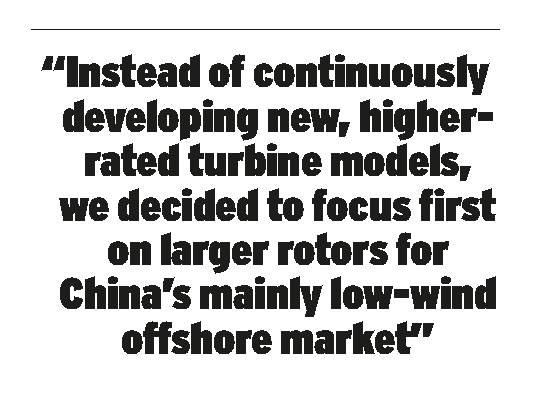 Zhai describes the current rate of up to CNY 0.85/kWh ($0.13/kWh) rate as good, but this could – in a worst-case scenario (and without some hoped-for compensation through provincial subsidies) – be more than halved from 2022 onward. The short- and medium-term future for offshore wind in China will therefore, in his view, be driven by uncertain market developments, rather than increasingly larger-scale technology.

“Instead of continuously developing new, higher-rated turbine models, we decided to focus first on larger rotors for China’s mainly low-wind offshore market. Our country has few IEC class I regions like Fujian, eastern Guangdong and south-east open waters currently qualifying for 10MW-plus high-wind configurations,” Zhai explains. “However, another 10MW-plus future option could be entering European markets, and there are already invitations.

“Our total offshore order backlog totalled 2,591MW at the end of Q3 2020, which gives us some extra time to decide on the best next steps”, he adds.

Since Goldwind was founded in 1998, it has installed more than 60GW, amounting to more than 35,000 turbines, most of which are direct-drive. The company has been the leading turbine manufacturer in China since 2011 and last year was ranked the third largest globally. Rankings for 2020 are not out yet.

One of the key enabling factors to Goldwind’s success were technology licences for 1.2MW and 1.5MW direct-drive models from small German turbine developer Vensys.

“During the initial exploration and learning period that commenced some years before Goldwind was formally set up in 1998, substantial knowledge was gained from external partners and through wind power experiences in Europe,” Zhai recalls.

Goldwind today has in-house capabilities to fully develop turbines and main components, entered into multiple local and international wind technology cooperation arrangements and further operates seven research and development (R&D) centres with global reach. Four of those are based in China, one in Chicago, US, another at the Vensys/Goldwind facilities in Neukirchen, Germany, and a final centre in Hinnerup, Denmark.

Goldwind became the first licensee for the 1.2MW Vensys 62 after Germany-based Vensys was established in 2000 to commercialise the direct-drive technology based on innovative concepts developed by professor Friedrich Klinger and his research team at the Saarbrücken University of Applied Sciences in Germany. The second Vensys prototype was installed in 2005 in China, following an earlier one in Germany. This was followed by a low-wind Vensys 64 (64-metre rotor diameter) and a second licence for the 1.5MW Vensys 70/77 upgrade. Goldwind co-developed the 2.5MW turbine with Vensys.

All 1.2MW, 1.5MW and 2MW-plus models share a passive air-cooled outer-rotor PMG and an innovative, patented toothed-belt driven pitch system initially developed for Klinger’s first 600kW Genesys turbine brainchild of which a prototype was installed in 1997 (below). 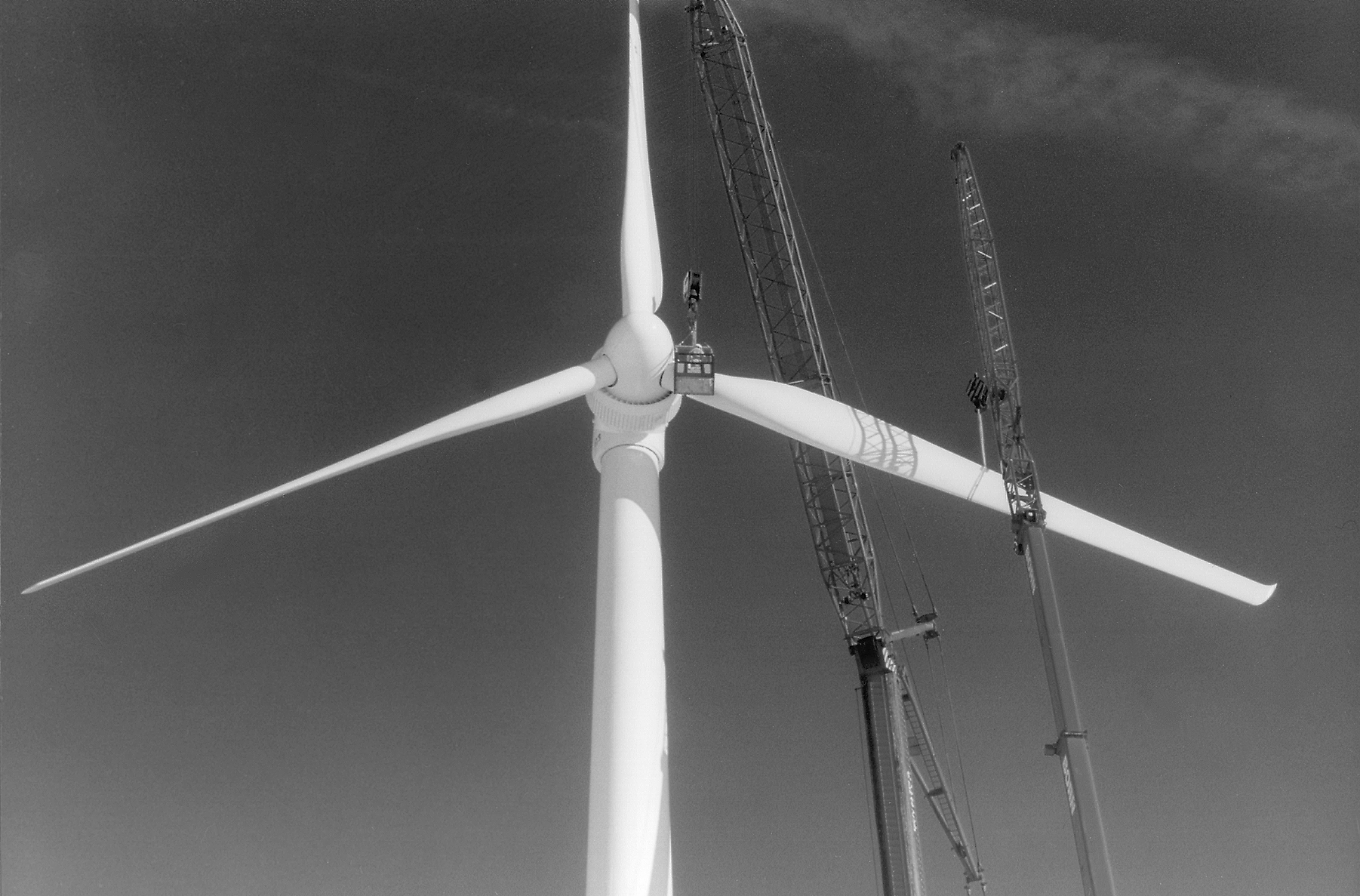 For the 2.5MW successor platform with a design focus on mass reduction, a switch was made to a single rotor-bearing and an active air-cooled outer-rotor PMG. These new design principles became the cornerstone and technology basis for Goldwind’s current GW2S, GW3S/4S, and 6S/8S product platforms.