Vestas is using a new tool to correct a blade’s position during installation that removes the need for handheld taglines.

The autonomous position system (APS) uses two remotely operated propellers to readjust turbine blades as they are lifted by a crane.

If the blade moves in high winds, the propellers can be activated to adjust its position.

This enables blades to be controlled during lifts in higher wind speeds – up to 12m/s, compared with about 9m/s with handheld taglines – Vestas has found.

There is therefore less time spent waiting for wind speeds to fall before a blade can safely be installed, Vestas’ vice president of construction in northern and central Europe Guido Hinrichs explained.

While the traditional method of using handheld taglines to stabilise blades during installation is still safe, the autonomous positioning system enables people to vacate the area under the suspended load sooner, he added. 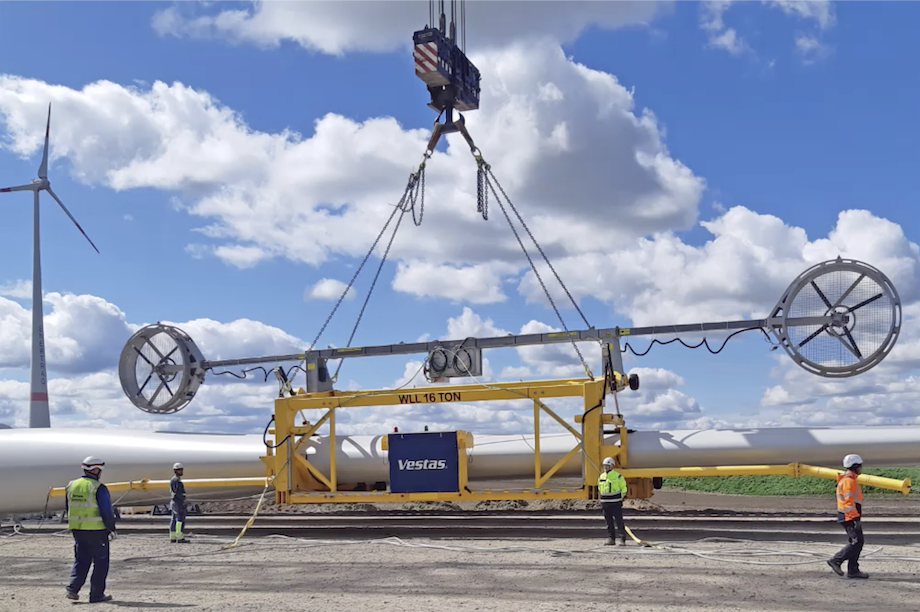 “It is a further tool in our toolbox to mitigate risk,” Hinrichs said.

“People are not directly in the ‘danger zone’ during the installation. We can limit the number of people nearby to a minimum.”

Vestas initially invented the APS, but then sold the tool to its supplier, Hvide Sande Shipyard. The Danish company subsequently developed it further, and made the technology commercially available for Vestas and other turbine manufacturers.

Vestas has already used the tool in several projects in Germany, Sweden and Norway, including to install 73.7-metre blades on one of the manufacturer’s V150 turbines.

The company added that it can also use the APS for the longer, 79.4-metre blade of its V162 model.

Technicians receive an introduction on how to use it, and Hvide Sande workers remain on site during the first uses of the system to ensure it is being operated correctly and safely.

Hinrichs explained that early indications suggest the system might be especially useful in higher wind speeds and also in complex terrains. This might include mountainous or forest sites where tagline operators struggle to find a safe spot to perform their role.

“We are not going to install all turbines with this tool,” he said, “but we are evaluating which kinds of projects are qualified for this.

“We think it will be about the season and the terrain.”