In the rare event of a turbine catching fire, service personnel need to reach safety as quickly as possible. With wind farms often located in remote locations or far out at sea, waiting for help is rarely an option.

The Evacuator is available in two versions. The first is a stand-alone sea-proof unit for external mounting on an offshore turbine’s helicopter-hoisting platform (below). It creates a central evacuation point and the possibility of storing extra harnesses, wetsuits and beacons. 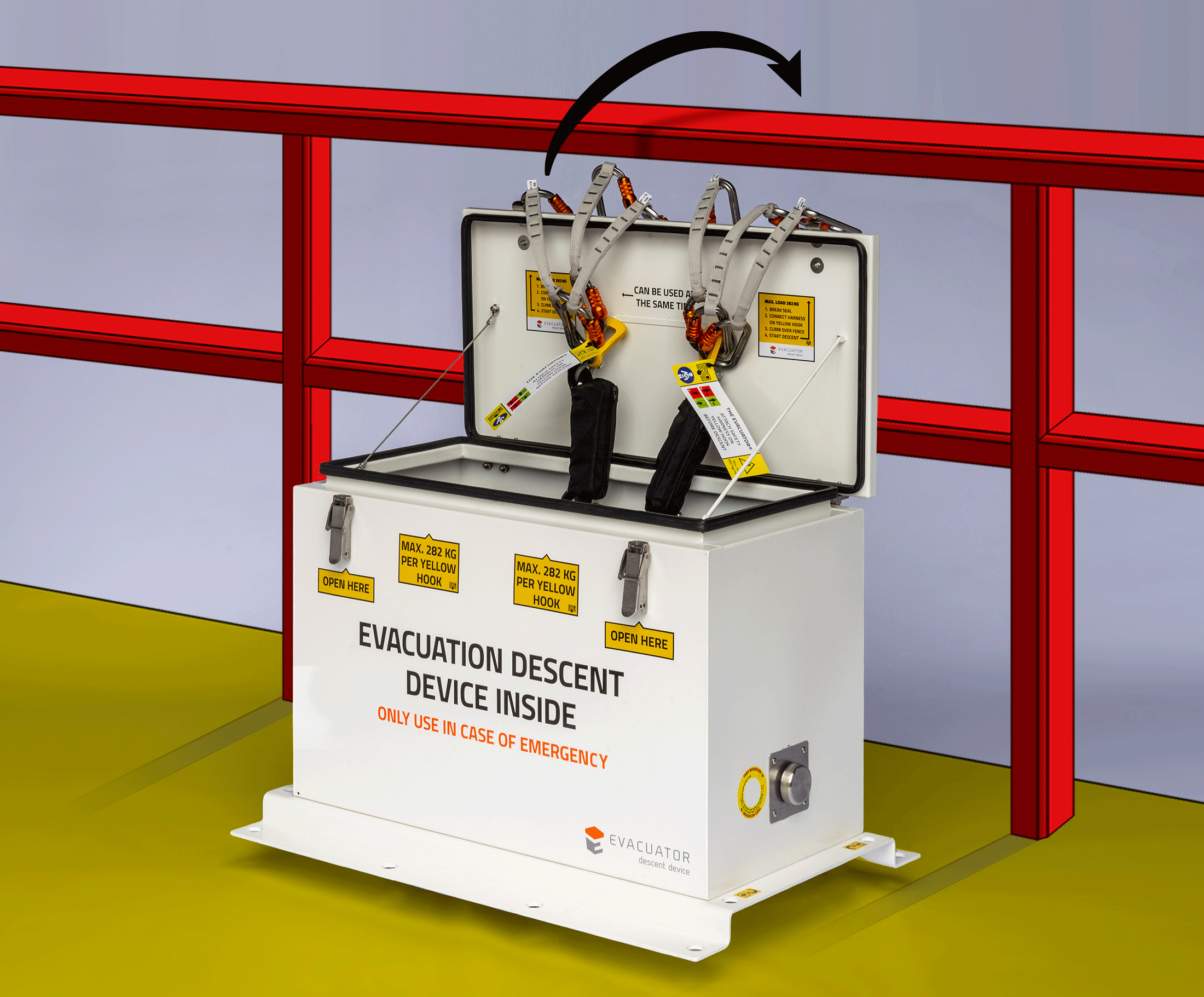 The onshore version comes with similar internals in a compact coated-steel casing and has been developed for mounting inside the nacelle.

Both versions use two separate sets of steel cables that resemble parallel cable-winches. Another key feature is an integrated brake-control unit that independently controls single or simultaneous cable descent operations. The maximum length of each individual steel cable is 300 metres — more than enough for even the largest current onshore and offshore turbines. Individual cable units can carry 282kg, which equates to multiple people and climbing gear.

While most modern turbines are equipped with one or more rope-based rescue kits, the descending gear is usually stowed inside a box located inside the nacelle.

“We conducted a series of interviews with operators from all over the world, asking how they evacuate in an emergency situation,” explains sales manager Jérôme Lacroix.

“They clearly indicated that a rope-based rescue setup is too complex to use in nacelle-fire and other emergency situations.

“Technicians working inside turbines all react differently in an emergency, but intuitively they flee to a place with air and light, like floor or roof escape hatches — the exact spots where the Evacuator hooks are pre-installed and ready for immediate use during evacuation.”

Nacelle fires usually produce lots of smoke, hampering visibility, and this is perhaps the single biggest threat to a safe escape. Other possible life-threatening situations occur when technicians do not know where to find rescue kits, discover that they are incomplete, or that they have simply left their equipment in their vehicles. During long shifts, technicians might remove their safety harness to be more comfortable, meaning they could end up being separated from their descending gear during a nacelle fire.

The interviews also revealed that it takes crucial time to assemble all the rescue kit items. When rope-based kits had to be replaced after reaching their certified ten-year lifetime, they were replaced with incorrect rope length, some reported, or, in the worst case, the replacement only happened on paper.

In the case of next generation 11-15MW-plus offshore turbines, as many as 10-12 service technicians will be working simultaneously inside the nacelle at multiple levels and also in the hub and/or tower, managing director Peter den Braber points out.

“Evacuating such personnel numbers in a very short time with traditional rope-based systems, and in worst cases from one or few fixed escape points, is virtually impossible,” he says. 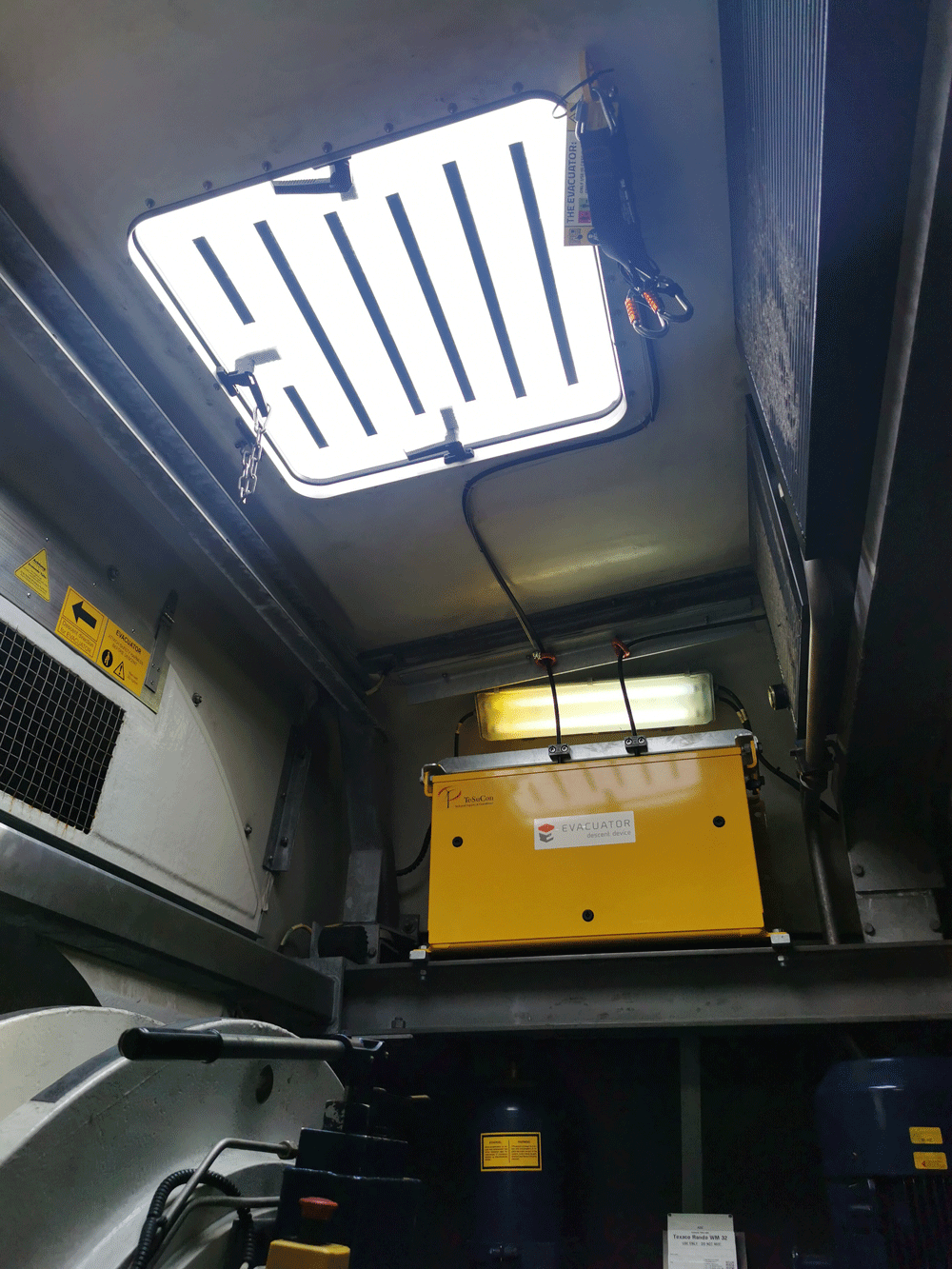 “Another added risk is ropes getting entangled. Our strategy is to carefully map out optimal escape routes for one or multiple Evacuator systems inside the nacelle. For offshore turbines this is expanded by one or more helicopter-deck mounted systems.”

The cables of each Evacuator for internal use are cut to length in the final installation steps, and the cable unit itself is mounted in a convenient spot, where it does not interfere with any normal service intervention. The Evacuator system is fireproof up to 1,750'C for 30 minutes, which eliminates steel cable burn-out risk, den Braber adds.

“In a sudden emergency, technicians only have to connect themselves to the pre-installed hook and evacuation can commence within ten seconds,” Lacroix says. “That’s perhaps the single biggest benefit of the system — users only have to ‘click-on’ and descent commences immediately.

“The cable system is impact-loaded by a minimal 30kg to start descent, and a cable-integrated energy absorber lessens the impact on the body. Descent is fully automated and fully mechanical, requiring no further user input, and it stabilises at a controlled 1m/s descending speed.”

The company has, among others, installed its first systems at a Dutch wind farm with 4.2MW Enercon turbines and another featuring Vestas V80-2.0 MW machines. The latter are due to be repowered and the systems will be re-installed in the new turbines.

“Our current main focus is to make the wind market aware of our new evacuation solution and convince them of Evacuator’s distinct benefits. Tesucon is now in the next phase of installing the first Evacuator systems directly in multiple prototypes on OEMs’ request for field testing”, Den Braber concludes.