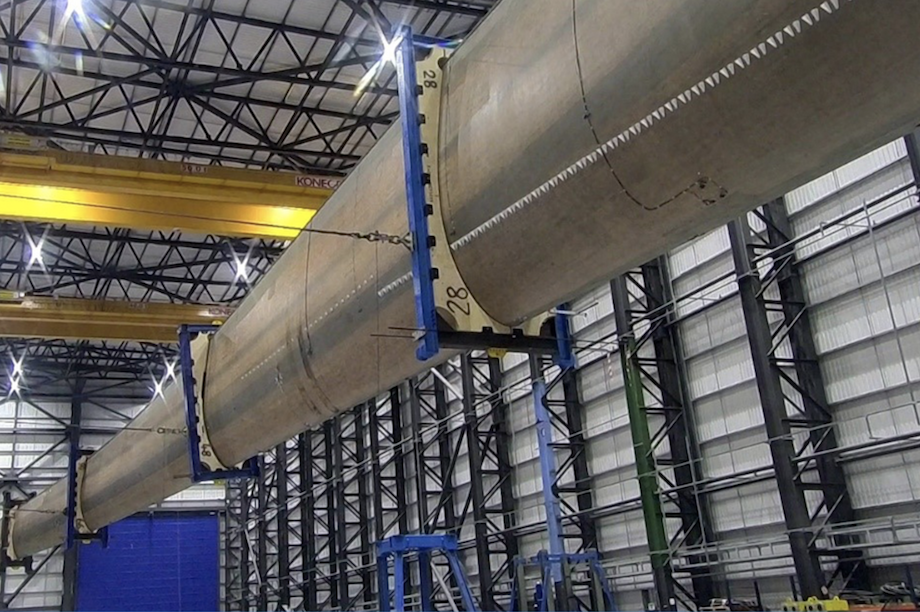 LM Wind Power has received the component certificate for what is currently the longest turbine blade in the world, following two years of testing

Certification body TÜV Nord validated the design hypothesis of the 107-metre blade that LM has developed for GE Renewable Energy’s up to 13MW Haliade-X platform.

Testing was carried out at two locations, with a single blade being put through its paces at each centre: one at the Wind Technology Testing Center in Boston, US, while the other underwent full-scale testing – including static, fatigue and post-fatigue testing – at ORE Catapult’s facility in Blyth, UK.

Both blades were produced at LM Wind Power’s factory in Cherbourg, France.

The 107-metre blade is so large that it would not fit into any test facility, and had to have its tip cut off to enable the doors to close at ORE Catapult’s test centre.

It will be fitted to GE’s Haliade-X platform, which has attracted orders for at least 3.7GW of offshore wind farms in waters off the United States and the UK, according to Windpower Intelligence, the research and data division of Windpower Monthly.

LM Wind Power’s 107-metre blade achieved component certification after being subjected to extreme loads under laboratory conditions – 50% greater than ever previously applied in previous testing, according to test and validation director at ORE Catapult, Tony Quinn.

Travel restrictions during the coronavirus pandemic presented challenges during the testing process, preventing blade test systems engineer Cornelis Van Beveren from attending final static tests in person. Instead, he guided the test team and monitored the tests via a live stream.

While LM Wind Power's 107-metre blade is currently the longest in the world, longer blades are being designed. Siemens Gamesa Renewable Energy's 14MW turbine will use 108-metre blades, and Danish turbine giant Vestas is due to unveil a new double-digit-MW turbine that could feature similarly sized blades.