The mood music for the global wind industry has improved significantly compared to last year amid signs of stability compared to other sectors of the world economy, according to the WindEnergy trend:index (WEtix).

The researchers concluded that the future of offshore wind energy has received “very optimistic assessments” recording “best-ever” results for Europe, and high hopes for Asia.

And there was a significant boost in the perceived outlook for the German wind industry compared to one year ago, when industry confidence hit a record low.

Perceptions around the German onshore wind segment are still “restrained” despite significant improvement, while the future of offshore wind industry is now seen much more positively, the researchers found.

The biannual survey of 1,250 market stakeholders was collated in autumn 2020 and was carried out on behalf of the WindEnergy and Hamburg Messe.

It found that the coronavirus pandemic has not had a major impact on optimistic expectations for the coming years.

Most people who responded believed the pandemic has had "no effect" on the wind industry or could even have a positive impact.

Additional growth will be found in the production of green hydrogen and digitalisation, the respondents believe.

While Germany remains at the bottom of the league in a global comparison of market assessments the expectations for the long-term development of the German wind industry are now more optimistic.

The two-year predictions for the onshore market are cautiously more positive, with the prospective offshore wind market two years ahead receiving the best WEtix assessment.

The market situation in the onshore wind industry in North America and Asia is increasingly seen as positive, and the values for Europe, following a decline in 2019.

The assessment of the market in the rest of the world remains positive, despite some losses.

The global expectations for the future onshore wind market are confident, with Asia and the rest of the world, in particular, holding a positive market outlook. 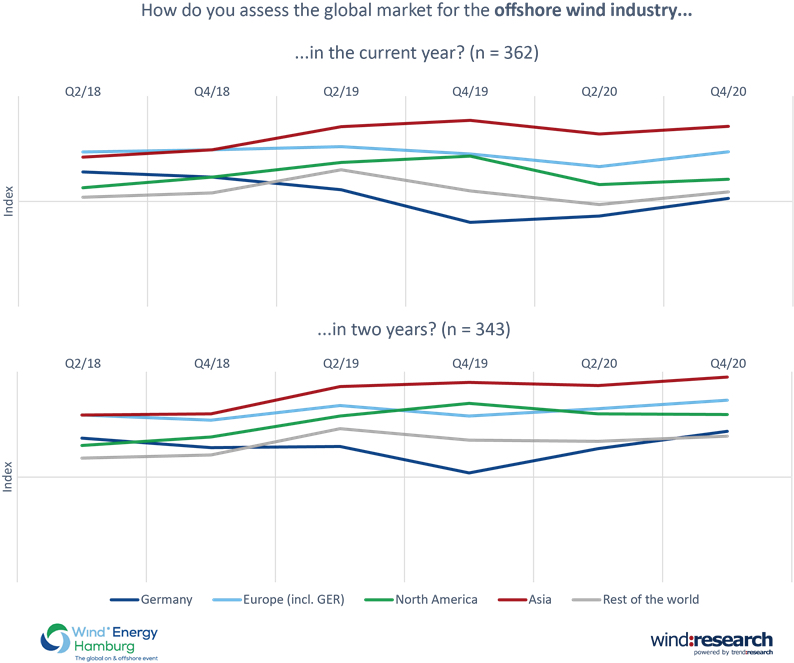 Assessments of the offshore wind market situation for Europe, North America and Asia, remain positive, with a slight upward trend.

The future of offshore wind is expected to be “very positive” with Europe, Asia and the rest of the world landing better results than last year.

Perceptions of the impact of the Covid-19 crisis

More than 50% of respondents for onshore and more than 60% for offshore either indicated that in their opinion Covid-19 has no effect, or was positive, while 40 fear negative consequences.

At the start of 2020, the International Energy Agency (IEA) published a report on the prospects for offshore wind, including the global resource, the economics and future trends.

It expected offshore wind to be competitive with fossil fuels within 10 years, with the levelised cost falling by almost 60% by 2040.

In October 2020, Windpower Monthly reported the German government and the wind industry begun talks over the 16GW of onshore wind capacity that was coming out of the nation’s old support scheme by 2025

And the German government recently passed draft energy reforms to help renewables provide 65% of the country's electricity by 2030.

The amendment, which still needs to be rubber-stamped by Germany's Bundestag, sees onshore wind growing from 55GW to 71GW by 2030, with offshore wind increasing from 7.7GW to 20GW by 2030.

The German parliament also signed off on a compromise on setback rules so that German states would have the final say on distancing rules for onshore wind turbines.

The measures were approved in June, ending months of arguments over the imposition of a setback rule of 1,000 metres from the nearest dwelling.

The International Energy Agency (IEA) published a report at the start of 2020 on the prospects for offshore wind, including the global resource, the economics and likely future trends.

Offshore wind was expected to be competitive with fossil fuels within the next decade, with the levelised cost falling by nearly 60% by 2040.

The price of offshore wind at that time was around $150/MWh, about a 60% reduction to $60/MWh and within the range of wholesale electricity prices.

European Commission data showed levels in the second quarter of 2019 were within the $36-60/MWh range, with a pan-European average of around $47/MWh.