The event began with a bang, as energy state secretary Sara Aagesen announced a schedule for renewables power auctions is nearly complete following two years of planning. The next tender could be held this year.

The auctions will end a period of uncertainty. The last rounds were held 2016-2017, when 4.6GW of wind was allocated, of which 1.6GW is yet to be completed.

They come at a price, with tough regulations geared at optimising grid integration, coupled with battery and hydrogen storage, warned Aagesen.

The aim is to ease the way for the 24GW of new wind capacity needed to meet the government’s 50.33GW cumulative target by 2030.

That objective is enshrined in Spain’s national climate and energy plan (NECP), submitted in April 2020 as part of the EU’s new Green Deal demands.

The auctions “could not arrive too soon,” said AEE president Juan Diego Diaz. Under the plans, at least 2.3GW will be installed annually to 2030, but newly commissioned capacity is already lagging this year, with just 735MW added so far amid the Covid pandemic.

Already buzzing, the congress mood was turbocharged by the EU’s September announcement of a €750 billion recovery package for Covid-hit countries, with €140 billion going to Spain.

The overwhelming response at the congress was less one of relief for the lifeline and more one of euphoria. “We hit the jackpot,” joked one delegate on the sidelines.

The mood is far removed from the wind power winter years of the conservative Partido Popular (PP) party’s administration between 2011 and 2018, when new capacity ground to a halt.

“It seems wind has become the blue-eyed boy not only of the Spanish electricity system but also of the government’s economic plans,” said Luis Merino, of industry magazine Energías Renovables.

Indeed, a roundtable discussion between energy leaders from five Spanish political parties unanimously backed the EU’s energy transition and wind power plans. Even the PP’s Guillermo Mariscal said his party “will present no opposition” to deployment.

The Congress took place at the conference hall of Hotel Hotel RIU Plaza España, Madrid. Roughly 100 delegates attended in person with more than 200 joining online, due to Covid restrictions.

Attending in person, Aagesen, underlined the Spanish wind sector’s resilience and the 735MW installed this year despite the Covid pandemic.

While that is far from the 3.5GW installed back in 2007, it still brings cumulative capacity to 25.7GW, behind only China, the US, Germany and India. 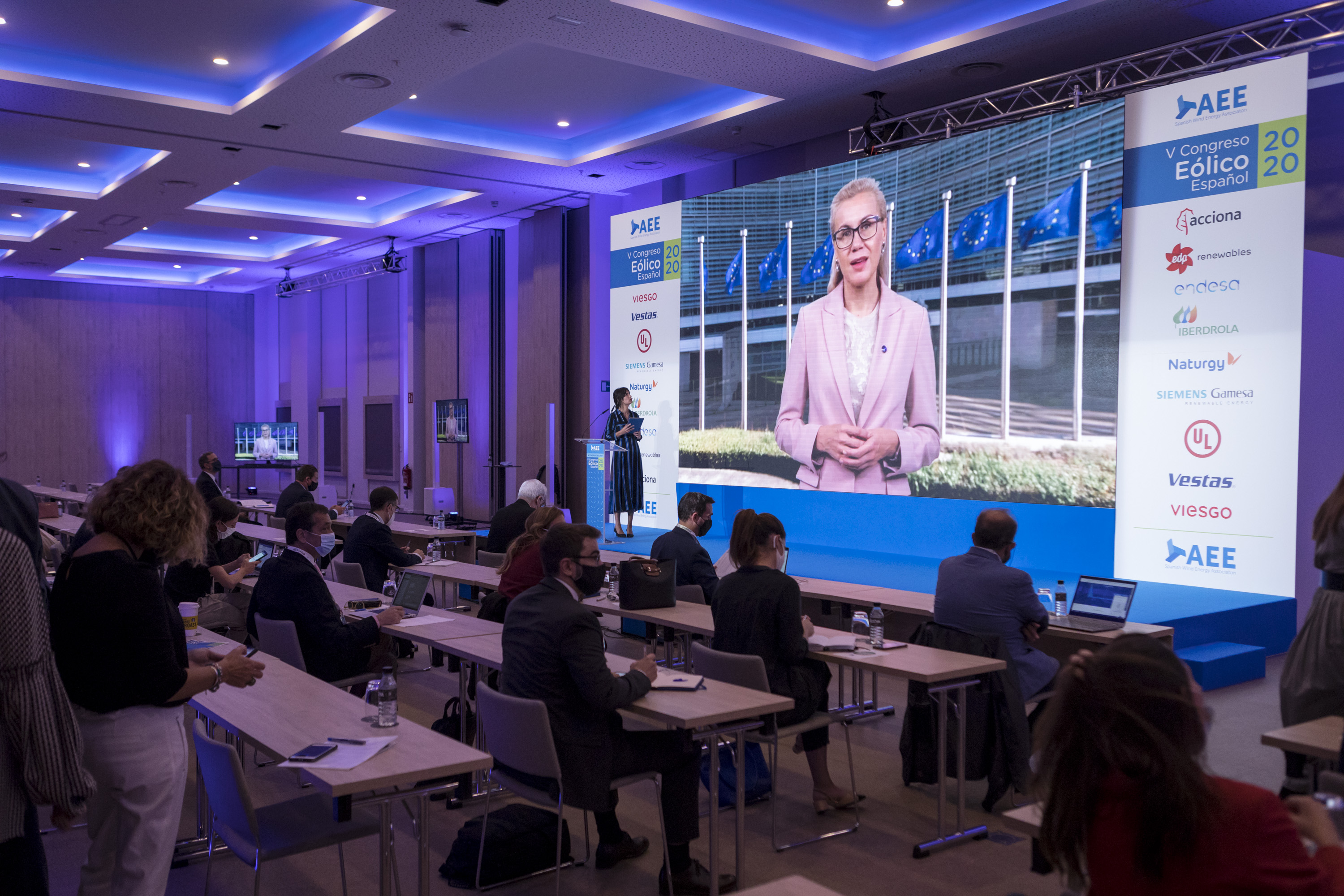 The studies follow the Commission’s September revamp of the EU’s greenhouse gas (GHG) emissions’ reduction target — now set at 55% by 2030, up from the previous target of 40%.

Diaz picked up the gauntlet: “The days of ‘pure wind’ projects are over and hybrid solutions will be the norm.”

He explained the NECP target will mean 74% of electricity from renewables, including 42% from wind, by 2030 (against 40% and 20% today, respectively). “Integrated storage and PV hybrids, together with increasingly sophisticated digitalised control mechanisms are vital to optimise wind penetration in both the power grid and power market,” he said.

Sector consultation on the government’s battery storage route map is imminent, said ecological transition minister, Teresa Ribera (below). Details are not yet public. 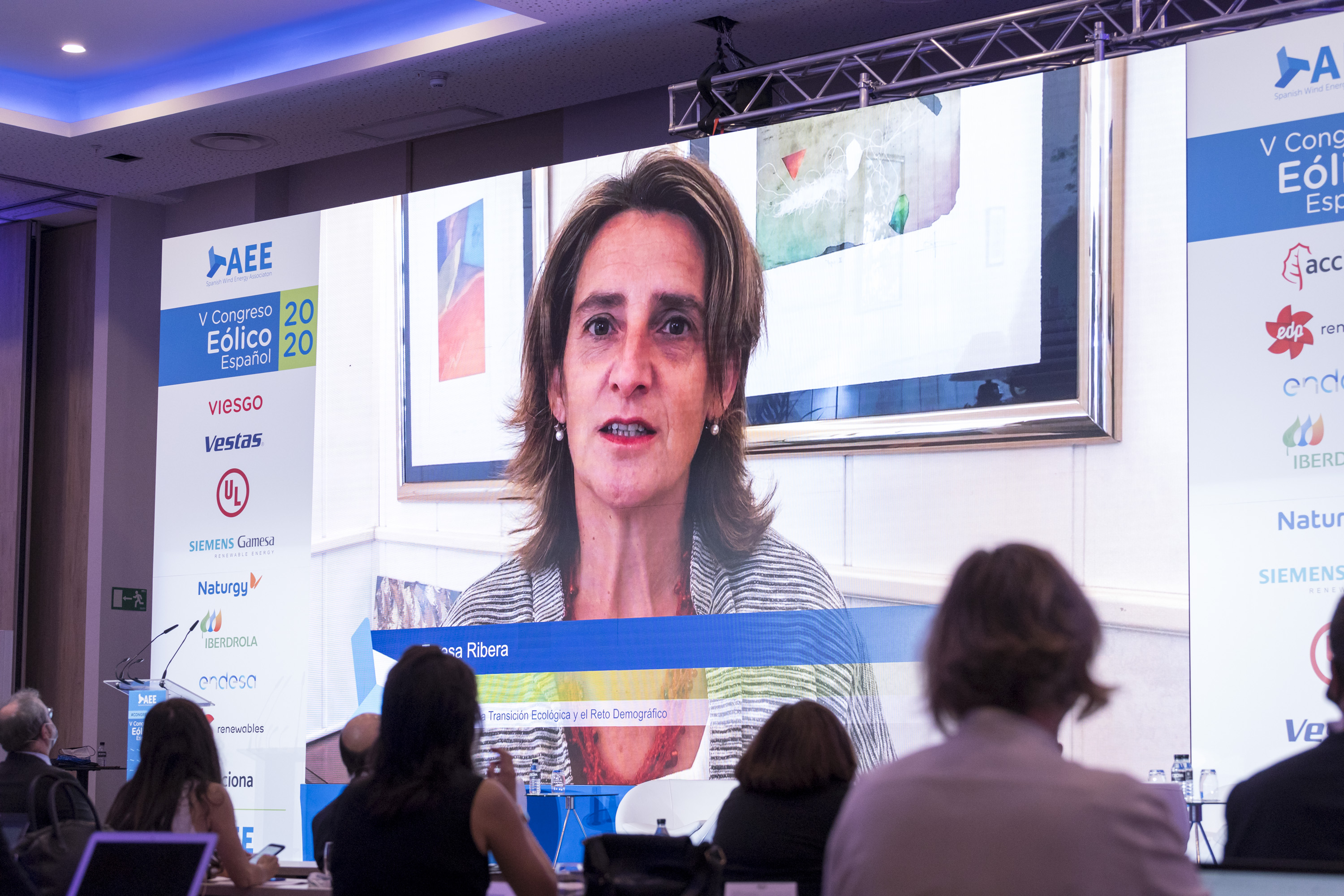 Spain already has a sophisticated grid to manage its high wind power loads, said Diaz. Yet interconnections with the rest of Europe, to export excess production, are still weak. Storage will provide a profitable offload for excess production, thus avoiding curtailment.

Meanwhile, the government has outlined a plan to install 4GW of hydrogen electrolysis capacity by 2030.

The blueprint will include an interim target of up to 600MW of electrolysis capacity by 2025.

It also aims for 25% of total industrial hydrogen demand to be supplied by renewables.

Additionally, it targets 150 buses, 5,000 cars and light vehicles—together with 100 filling stations—and two commercial train routes, all to run on hydrogen.

Regarding dedicated battery storage for wind and other renewables, Aagesen (below) said “extensive” regulation was currently being drawn up, though details remain confidential. 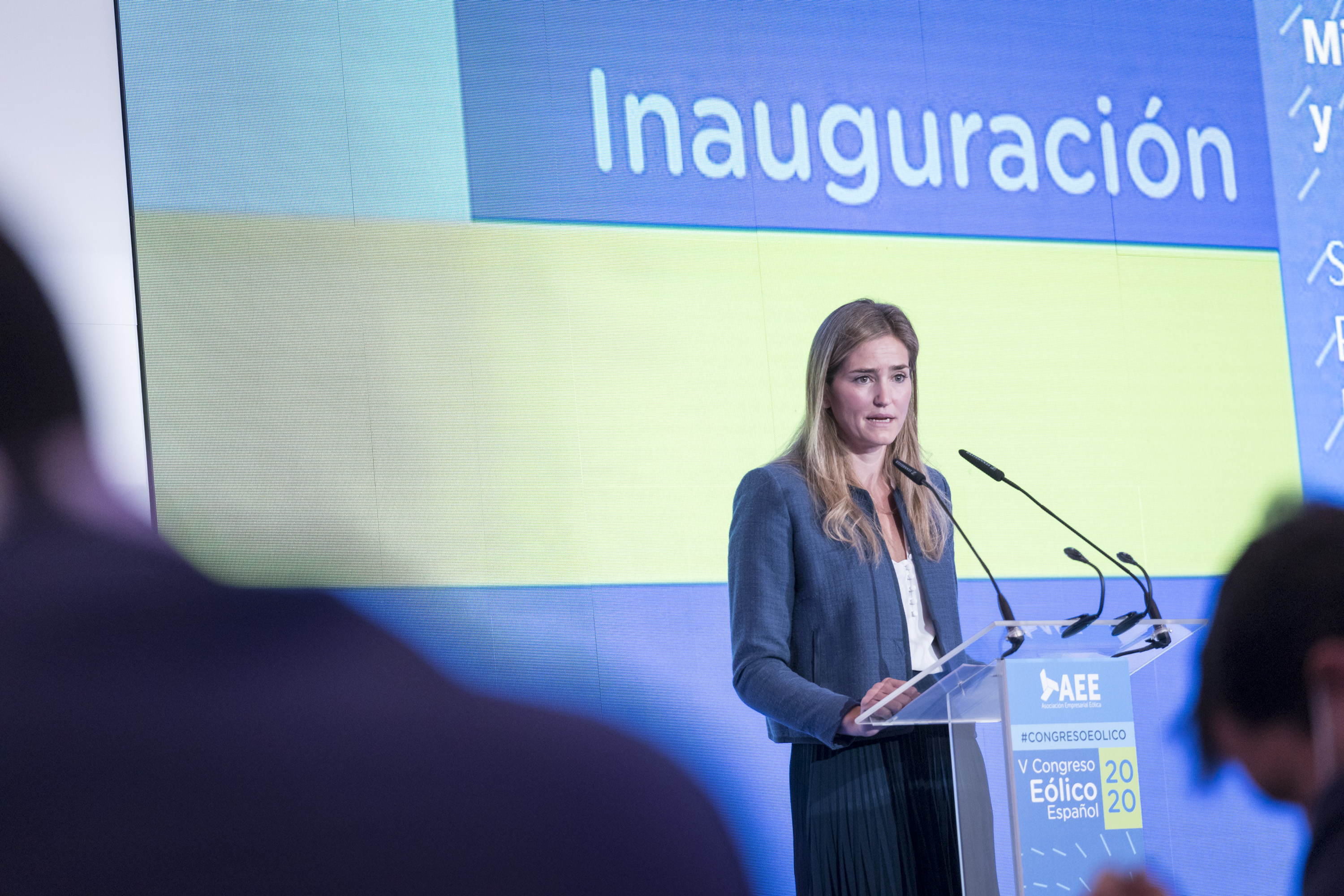 In a roundtable discussion on grids, the IDAE’s Morell said he expected commercial opportunities to develop for agents managing and trading energy from battery storage.

Meanwhile, government plans to deploy 250,000 electric vehicles by 2025 were welcomed as a further opportunity for renewables – especially for high winds at low electricity demand at night.

Nevertheless, as of 2025, growing battery storage capacity will be called upon to smooth wind power output peaks and troughs, providing power for periods up to eight hours.

Batteries were also viewed as an aid for wind producers to guarantee power in power purchase agreements (PPAs).

Spain was the biggest PPA market in Europe for renewables this year, with 716MW signed between developers and corporations, according to Oliver Metcalfe, energy specialist for BloombergNEF, in his keynote speech.

Fergie will perform its own due diligence on contracts covering a minimum of five years and 10% of a company’s energy consumption.

Should there be a shortfall in that consumption, the insurance fund will pay out the difference to the renewables producer.

Fergie will cover a maximum of €600 million worth of PPA over the next three years.