The Vestas V90-3.0MW nacelle was the key attraction at the 2003 Husum Wind technology trade show in Germany. The most striking feature of this ground-breaking new concept was that despite having 50% more capacity and a 27% increase in rotor-swept area over the V80-2.0 MW, the nacelle mass and dimensions were virtually unchanged. 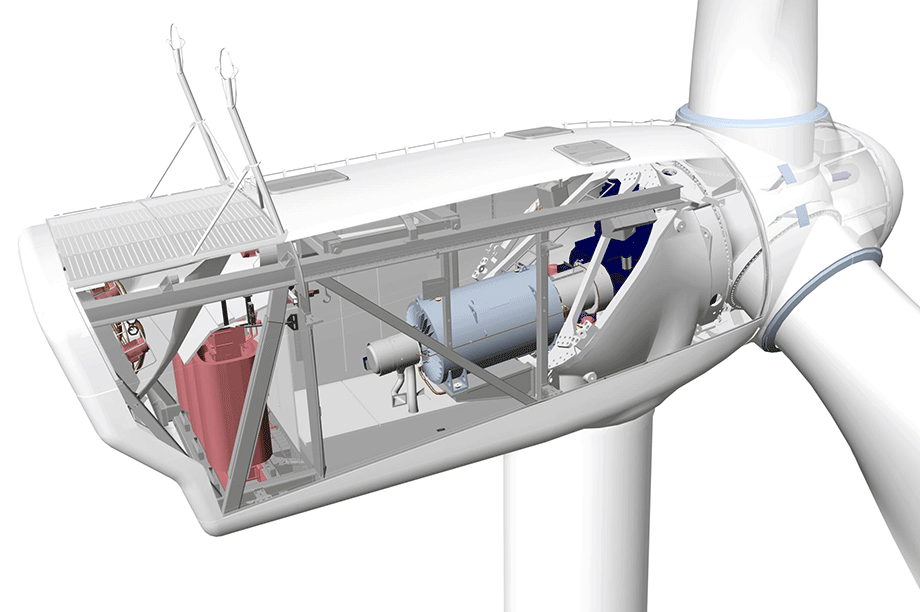 Inside the high-speed drivetrain, the gearbox came with an integrated single rotor bearing, directly flanged to the cast main carrier — eliminating the "traditional" main shaft.

Scaling along proven conventional V80 technology lines would have increased head mass (nacelle and rotor) and tower mass substantially, a Vestas spokesperson said. One external expert described the V90 as trend-setting at the time: "The competition will have no other choice than to follow the new Vestas design philosophy." Others were more cautious, pointing, for instance, at an increased risk of failure when introducing several major innovations at the same time.

Vestas was already working on an offshore turbine of around 5MW, and with V90 design principles certain to be reapplied, according to the spokesperson. "We have now introduced an optimised, efficient design for onshore and offshore wind generation and will of course build on our experience with this machine."
The V90-based 5MW turbine never materialised, but Vestas installed several V100-3.0 MW (prototype) turbines with a 100-metre rotor during 2003/4, and a V100-2.6 MW prototype in 2011/12.

Unfortunately, the V90 series soon developed major gearbox issues, and establishing the root cause proved complex and time-consuming. In early 2007, Vestas was forced to withdraw the offshore version from the market for a year to establish "the cause of problems with the gearbox".

A complete redesign pushed head mass up from 104 to 112 tonnes, which still counted as lightweight against the 130-tonne values of equivalent sized competitors of the time, but the reputational damage had been done. The successor — marking a return to a conventional non-integrated drivetrain with a three-point gearbox support, and the option of a 112-metre rotor — put the platform back on course.

The V90-3.0 MW track record now amounts to a remarkable 3,427 units installed both onshore and offshore.

Designed for both onshore and offshore use, the NEG Micon NM110/4200 prototype was installed in October 2003. If things had been different, it may well have given the Siemens SWT-3.6-107 a run for its money to become the "offshore workhorse" in the years that followed.

The NM110/4200 built technologically on the 2.75MW NM80/2750, introduced in 2001, and the NM92/2750 sister model, which together had marked the company's relatively late switch from fixed-speed/active-stall operation to pitch-regulated variable speed (PRVS). Both prototypes were installed in 2002.

The NM110/4200 focused on European "close to IEC 1 sites" and featured a non-integrated high-speed geared drivetrain with three-point gearbox support and DFIG. The power converter and MV-transformer were located in the tower base. The design focus for the NM110/4200 was to use proven wind-industry components and systems, reduce risks and substantially shorten time to market.

The turbine was remarkable for its 214-tonne head mass — a benchmark for a high-wind turbine of this size — which the company claimed would have a positive impact on transportation logistics and installation, until more suitable cranes would become available.

Although the NM110/4200 arrived as a fully certified product and enjoyed huge developer interest, its track record remained limited to a single prototype.

US company Clipper Windpower introduced the 10MW Clipper Britannia in a concept launch in 2006, with a 150-metre rotor diameter and 72-metre-long blades, challenging the imagination of wind professionals. 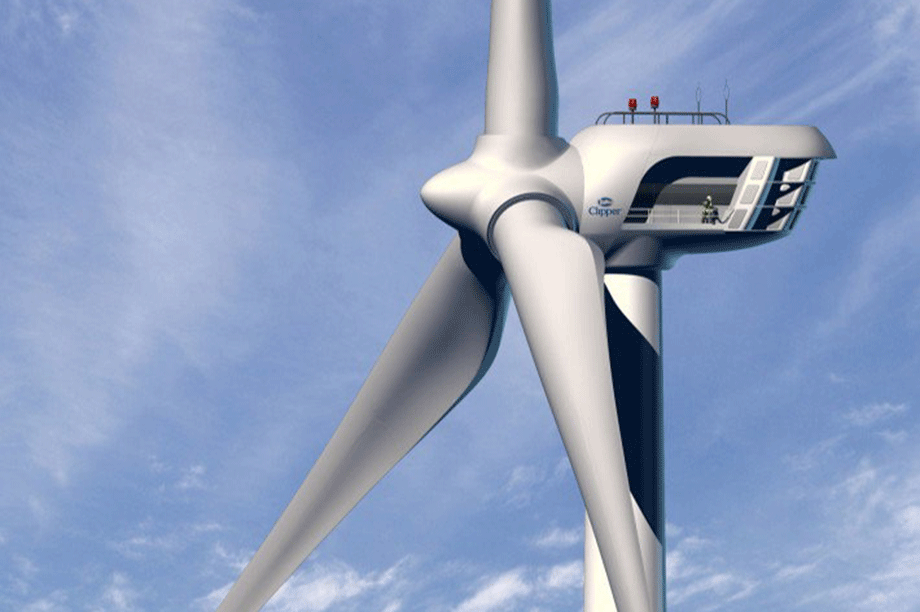 The initial C-150 concept for IEC 1A mechanically built on the 2.5MW Clipper Liberty onshore turbine, with its unusual two-stage high-speed semi-integrated drivetrain featuring four flanged PMGs. An essential element of the Britannia design was a very high 2,270rpm-range rated generator speed, up from the Liberty's 1133rpm. This offered substantial potential to reduce head mass to a 450-550-tonne target, a benchmark value for the period.

The final Britannia drivetrain layout represented a major switch away from the original concept. A semi-integrated configuration was retained, but with a medium-speed two-stage planetary gearbox and single flanged PMG to reduce complexity. No further details were made available.

A bold, never realised patent-protected plan for a retractable rotor was revealed in 2006. This involved a capability to stretch the rotor blades to their largest diameter during low and medium wind speeds to maximise energy capture and retract them during high-wind conditions to limiting rotor and turbine loads.

After facing huge losses due to disastrous serial gearbox and blade failure problems with Liberty turbines, ailing Clipper Windpower was sold to its major stakeholder, US-based United Technologies Corporation. This takeover did not save the Britannia project, and it was shelved in August 2011. 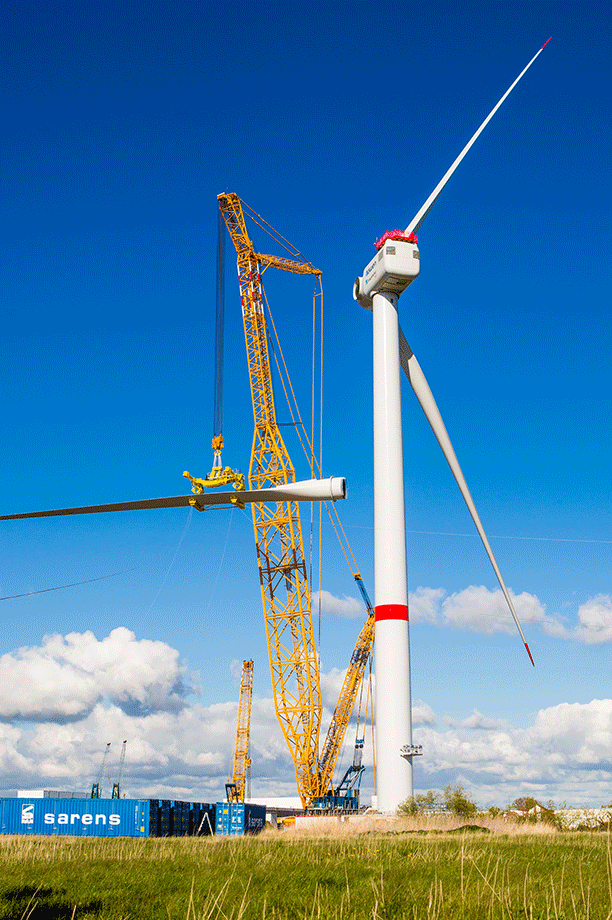 With a 180-metre rotor diameter, 88.4-metre blades and the 8MW rating, the turbine offered one of the lowest specific power ratings at 314W/m2. The initial product development under Areva ownership built on upscaling the original 5MW Multibrid technology, incorporating a (semi-)integrated low-speed drivetrain with a stepped or 1.5-stage planetary gearbox and PMG.

After Areva formed the Adwen offshore joint venture with Gamesa, the drivetrain was redesigned into a medium-speed concept with a two-stage planetary gearbox, which at least partly built on Gamesa G128-4.5 MW (2008) technology. This included a main bearing unit with two bearings and a "free-hanging" flanged-on gearbox and permanent magnet generator.

A prototype was installed in May 2017 in Bremerhaven, Germany. The AD 8-180 never made it into a serial product due to the Siemens Gamesa merger in 2017 and a decision to continue offshore activities with the already commercially successful Siemens legacy direct-drive turbines.

This discontinued 7MW offshore concept, initially known as SeaAngel, with a 167-metre rotor became a "technology demonstrator" after Mitsubishi Heavy Industries (MHI) and Vestas launched their offshore joint-venture in 2014. It was the most powerful turbine ever to incorporate a fully hydraulic drivetrain. 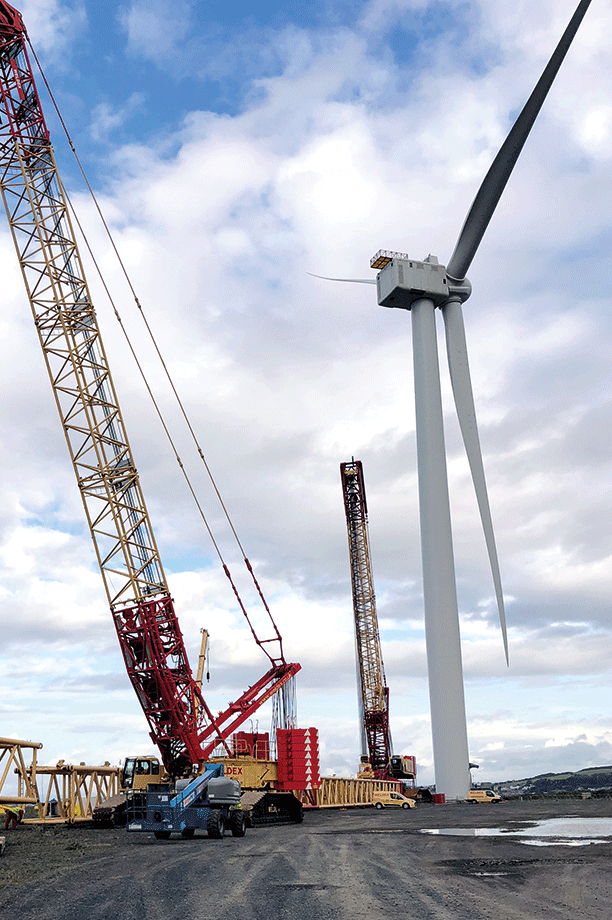 Hydraulic transmissions spearheaded by Japanese industry heavyweight MHI between about 2010 and 2015-16 enjoyed considerable interest. Its new drivetrain technology was quoted in a 2014 study by UK sea bed manager the Crown Estate that looked into building offshore turbines without power converters.

The first prototype was installed onshore at SSE's Hunterston test site in Scotland in 2014 and dismantled in 2018 (below) when the utility decided to close the site. The second unit became operational in 2015 as a floater off the Japanese coast near Fukushima, but, according to reports was "riddled with operating problems" and decommissioned.