The UK's Department for Business, Energy & Industrial Strategy (BEIS) recently issued its latest estimates for electricity generation costs. The generation landscape has completely changed since the last version was published four years ago.

The generation costs run to 2040, with wide variations for all technologies depending on construction costs and, in the case of wind and solar, on the characteristics of the local renewable energy resources

BEIS does not apply a uniform interest rate across all technologies — unlike many similar reports — but uses "hurdle rates" that reflect the perceived risks associated with a particular technology. According to the report, "hurdle rates are defined as the minimum financial return that a project developer would require over a project's lifetime on a pre-tax real basis".

At 5%, solar PV has the lowest hurdle rate under this approach, reflecting the technology's attractiveness to an investor. However onshore wind is clearly seen as financially robust, with a hurdle rate of 5.2%. Unabated CCGT attracts a higher rate of 7.5%.

Sensitive matter
The report deals with generating cost variations by providing central estimates plus sensitivities.
The central estimates put solar just below onshore wind in 2025, by a small margin —£44/MWh (€48.4/MWh) compared with £46/MWh . Offshore wind comes next at £57/MWh and CCGT (both unabated and with CCS) at £85/MWh.

Previous versions in the series included coal (with CCS) and nuclear, but these are barely mentioned in the latest edition. Readers are referred to the 2016 version, which assigned nuclear a generation cost of around £95/MWh (2014 prices).

This is roughly consistent with the agreed price for the power station currently under construction at Hinkley Point – £92.5/MWh in 2012 prices, or around £97/MWh in 2018 prices, which is the baseline year for the latest edition. The report notes: "The government's ambition is for the nuclear sector to deliver a 30% reduction in the cost of new build nuclear projects by 2030." 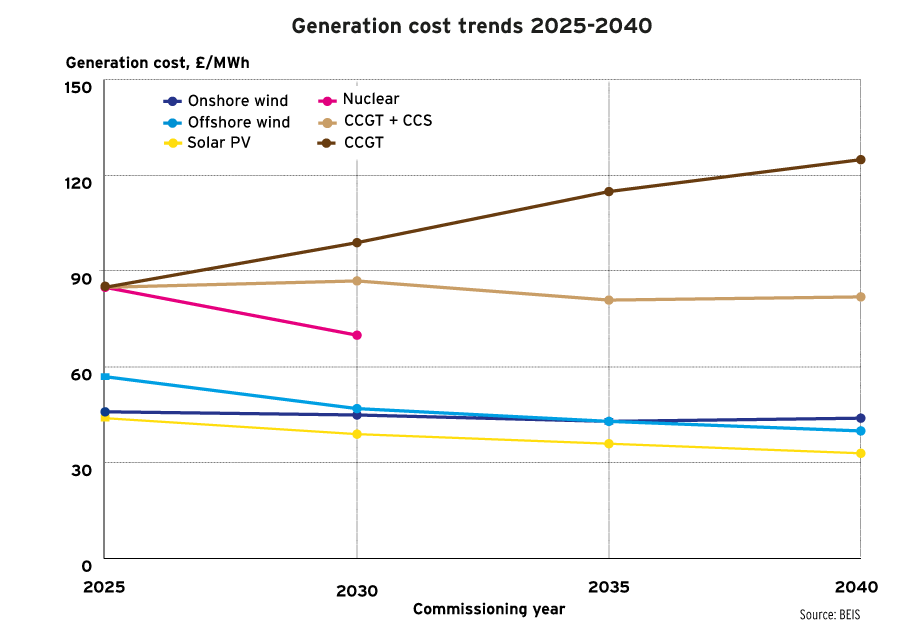 Generation cost trends for the principal technologies from 2025 to 2040. The progressively higher prices for CCGT reflect rising carbon costs. Note that the figure for nuclear is an aspiration, rather than a firm estimate

Offshore wind farms can benefit from economies of scale — featuring large numbers of giant turbines — whereas onshore developments are more constrained. This means the gap between offshore and onshore construction costs narrows, and by 2040 the average offshore cost is expected to be around £1,230/kW, only slightly higher than the onshore cost of £1,020/kW.

Comparing the BEIS data with other reports, some results are similar, while others diverge. The Danish Energy Agency suggests onshore wind will cost just over $1,100/kW by 2040 — slightly lower than the UK figure of $1,150/kW. The UK, however, suggests offshore wind costs will fall faster, reaching $1,562/kW by 2040, whereas the Danish Energy Agency suggests it will be just over $2,000/kW. The UK figure is, however, close to the "lower bound" estimate of the International Renewable Energy Agency (Irena).

Impacts of variability
Levelised generation costs are the most common method of comparing technologies, but other considerations need to be kept in mind, including what the report terms the "system impacts." These arise mainly as a result of the variability of solar and wind energy, but also due to locational issues.

The report suggests these impacts can be positive or negative and are associated with all the technologies discussed. This is a controversial topic, where results are specific to the geography of the power system, the location of the renewable sources and to the market structure.

It may be noted that the report on which estimates are based — Whole power system impacts of electricity generation technologies, by Frontier Economics on behalf of the UK government — is now four years old. The new BEIS report suggests what it terms the "enhanced levelised costs" tend to reduce the generation costs of CCGT (with or without CCS) and increase the costs of the renewables. 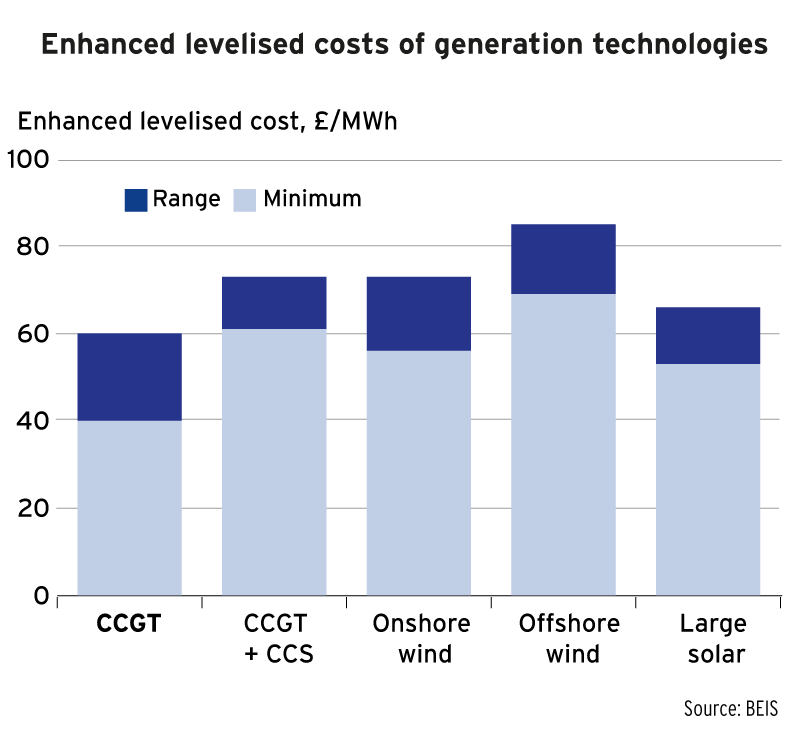 Enhanced levelised costs of generation technologies, including the range of estimates

At a glance — This month's report conclusions