Job growth was slower in the wind power industry than in the rest of the renewable energy sector last year, and wind trails other clean energy technologies and also fossil fuels for female representation, according to a new survey.

Renewable energy jobs increased 4.3% to 11.5 million last year, with wind power sector jobs inching up 0.8% to 1.2 million from 2018, according to the International Renewable Energy Agency (IRENA).

Solar PV (3.8 million) accounted for the most renewable energy sector jobs in 2019, followed by biofuels (2.5 million), hydropower (nearly 2 million) and then wind (1.2 million).

Irena also noted that while renewables jobs have typically shown more inclusion and a better gender balance than fossil fuels, this is not the case for wind.

Women accounted for 21% of wind power jobs in 2019 – 11 percentage points below the share in the renewable energy sector and one percentage point below that of the fossil fuels sector.

Irena warned that wind is therefore “failing to tap a rich pool of talent that could add valuable perspectives and open new pathways for innovation”.

The analysts found that individuals and companies acknowledge that women possess the required skills and knowledge to participate in the wind power sector. However, persistent gender role perceptions and cultural-social norms continue to be major barriers to gender equality in the industry, Irena found.

The analysts pointed to an under-representation (14%) of women in science, technology, engineering and mathematics (STEM) jobs worldwide as a partial explanation for women also being under-represented in wind.

Wind power’s supply chains are expanding, Irena found, but the majority of jobs continue to be concentrated in a small number of countries.

The analysts noted the increase in countries with offshore wind farms to 18 last year – up from ten a decade earlier. 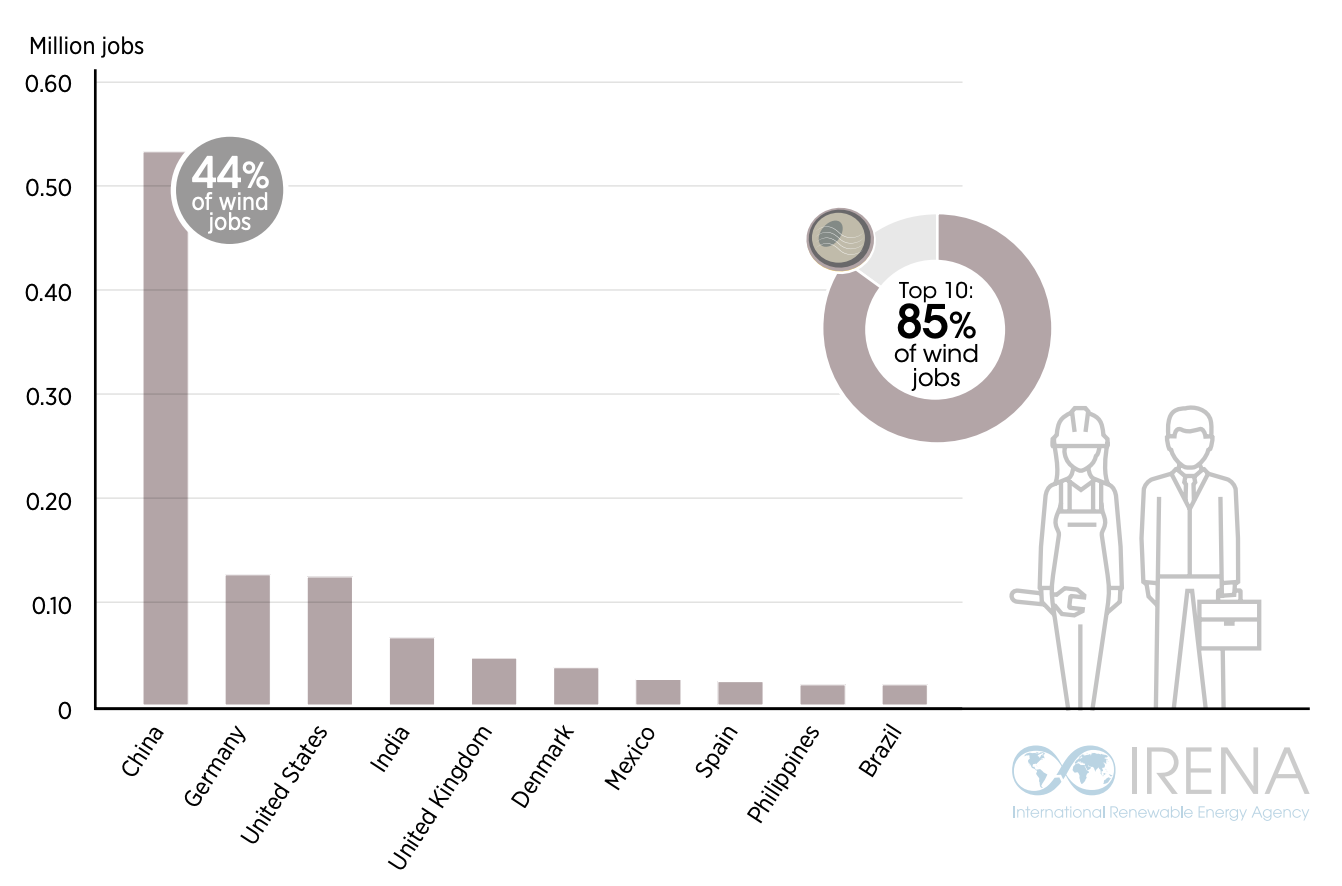 However, wind power jobs are more balanced between regions than they are for solar PV, Irena noted, with Asia (56%) accounting for the highest number, ahead of Europe (27%) and North America (11%).

Irena suggested that creation in the wind power industry, and wider renewable energy sector, could be accelerated through strong policy frameworks.

Policymakers must prioritise reskilling for fossil fuel sector workers who have lost or are at risk of losing their livelihoods, Irena stated, noting that many have considerable skills and expertise to contribute to a reoriented clean energy industry.

Meanwhile, the Global Wind Energy Council (GWEC) has estimated that some 344GW of new wind power capacity could be installed worldwide between 2020 and 2024.