United States
Feature
The latest Wind Energy Technology Update from the US Lawrence Berkeley National Laboratory paints a bright picture of wind-energy developments in the US, with falling prices and continued growth.

In 2019 nearly 9GW of wind was installed — bringing the total capacity to more than 105GW — and electricity output rose to cover nearly 7% of annual demand. 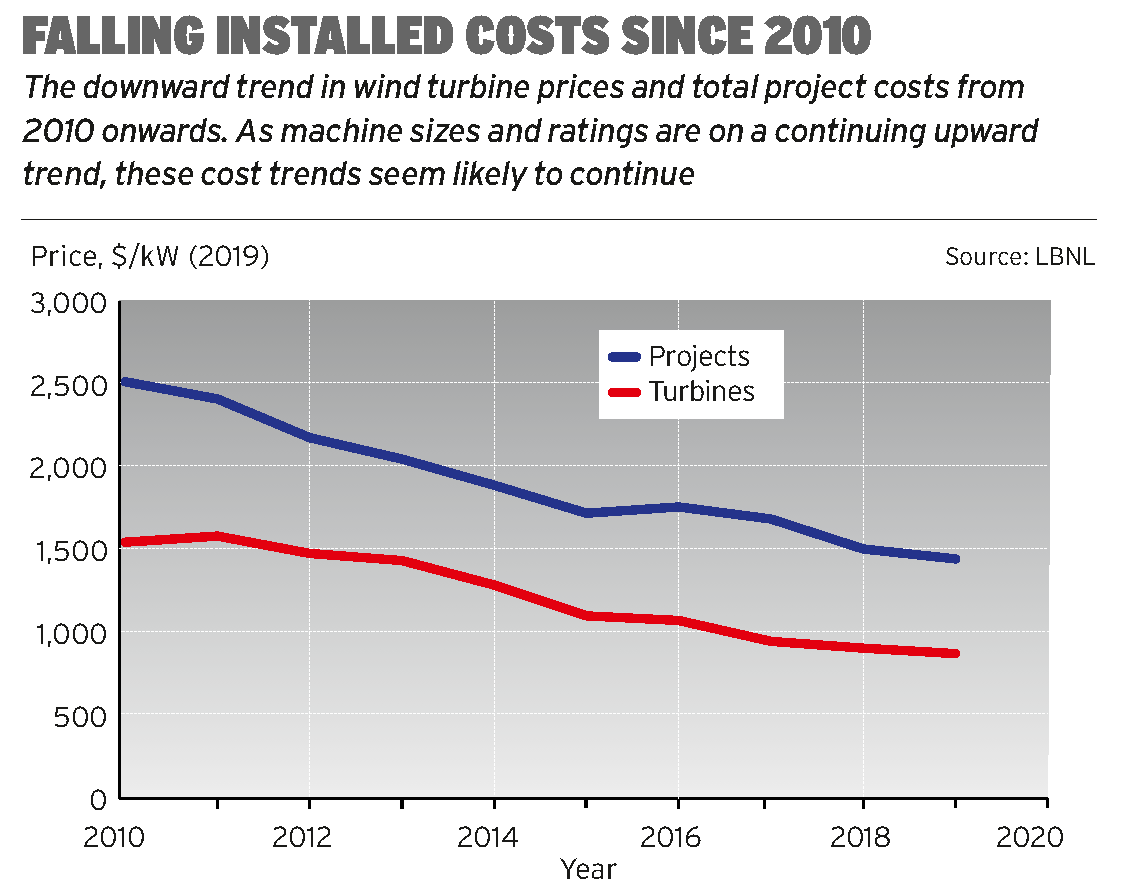 This means that wind turbine costs had fallen by 44%, total installed costs by 43% and balance of plant costs by 41%.

One reason for these cost reductions was the increase in the size and rating of the turbines. The average rating of machines installed in 2010 was 1.79MW, whereas last year it was 2.55MW. Rotor diameters have increased from 84 metres to 121 metres, while hub heights have grown from 80 to 90 metres.

Operation and maintenance (O&M) costs have also been falling steadily over time, although it is difficult to specify exact figures as there is a lot of scatter in the data.

The report also notes that the sample size is limited. Newer machines have lower O&M costs, although they tend to rise with the age of the machines.

With these caveats, the average is currently around $20/kW/year. This figure does not include all operating costs — such as local taxes, for example — and the overall figure is estimated to be around $43/kW/year.

The other parameter that affects the cost of energy is the productivity. Here, the picture is obscured due to the trend towards lower ratios between rated power and turbine size.

This has the effect of delivering higher capacity factors that reflect higher energy yields per kilowatt of capacity, but not in terms of energy per unit area of the rotor.

The other issue that is obfuscated by this trend is the fall in costs, which is actually greater than it appears to be from a $/kW comparison. The table (below) illustrates these aspects, comparing the average data for machines installed in 2010 and 2019. 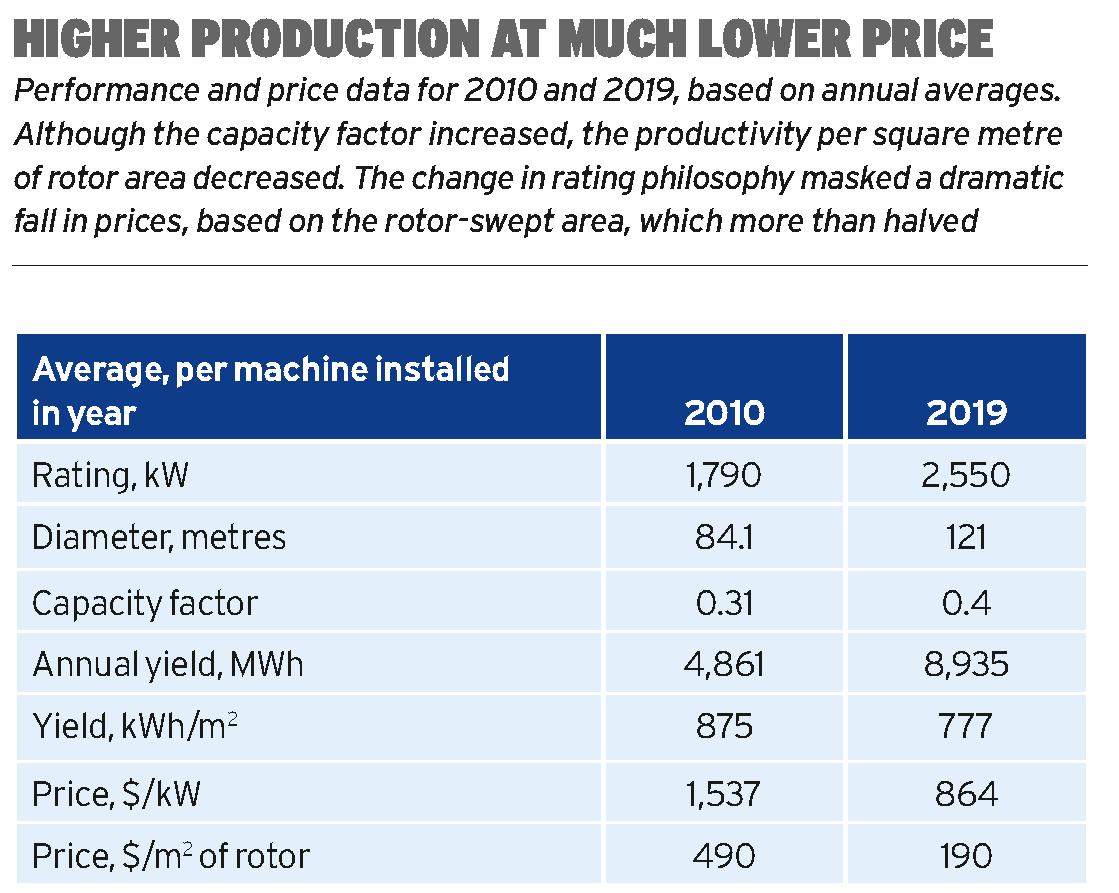 Taking into account all the factors that influence the cost of energy, including changes in interest rates, the report shows the costs of energy fell from $85/MWh in 2010 to $36/MWh in 2019. Interest rates also fell during this period, which means part of the drop is due to external factors. 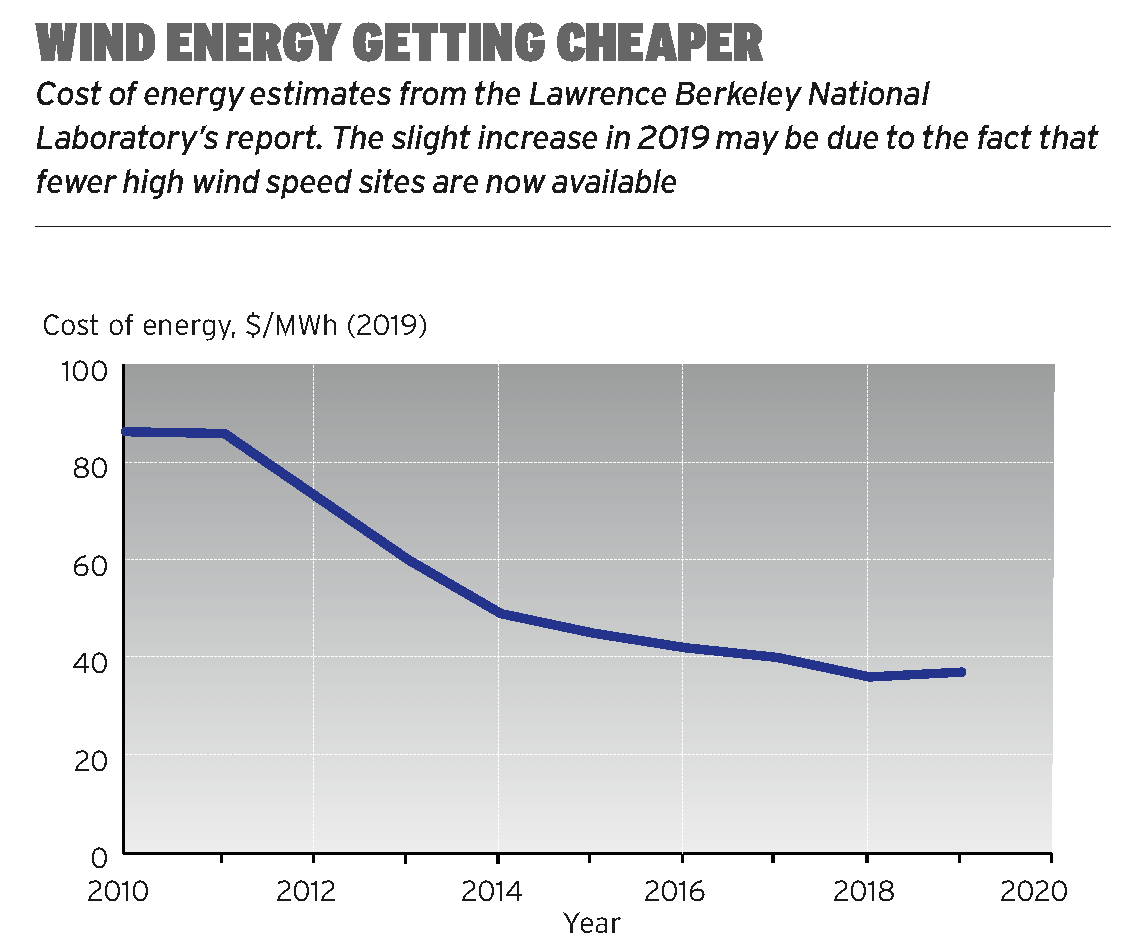 The additional costs that must be assigned to wind energy to account for the extra system costs due to variability is a subject of debate.

It is a complex issue, with no agreed set of definitions, nor a standard method of calculating the costs, but the report shows data from seven system operators. Penetration levels — wind capacity’s share of the total capacity — range up to 85%.

Unsurprisingly, there is a lot of scatter and the median trend suggests that, with a 50% penetration level, the extra cost is around $5/MWh.

Wind energy technology data update: 2020 edition, Wiser, R et al, August 2020 Review of the latest developments in wind energy technology in the United States up to 2019. Information on costs, wind turbine characteristics and other aspects, most of which is generally applicable, worldwide