Oil demand may have already peaked as it is replaced by fast-growing renewable energy sources such as wind and solar PV, according to oil and gas major BP.

Demand for oil may never fully recover after the coronavirus pandemic and may begin falling in absolute terms for the first time since the industrial revolution, the company concluded in its 2020 Energy Outlook report.

BP sees renewables as being the fastest growing energy source over the next 30 years in all scenarios, especially with wind and solar able to power newly electrified, hard-to-abate sectors such as transport, heating and buildings.

Renewables will meet a greater share of global energy demand, even as energy demand grows, driven by increasing prosperity and living standards in the emerging world, BP believes.

Greater electrification and a rapid growth in renewable energy capacity would also cause a shift in energy consumption away from fossil fuels.

Implementation of decisive policies – such as “significant increases” in carbon prices – can help deliver a lasting reduction in emissions from energy use, the oil and gas major concluded.

Under both BP’s "rapid" and "net zero" scenarios, the report considers that demand for liquid fuels will never fully recover from the fall caused by Covid-19, implying that oil demand peaked in 2019 in both scenarios.

In a business-as-usual scenario, BP sees renewables meeting 20% of global primary energy demand by mid-century – up from 5% today – with emissions in 2050 less than 10% below 2018 levels.

But with the introduction of policies and measures targeting more ambitious carbon emissions reductions this increase could be even greater. 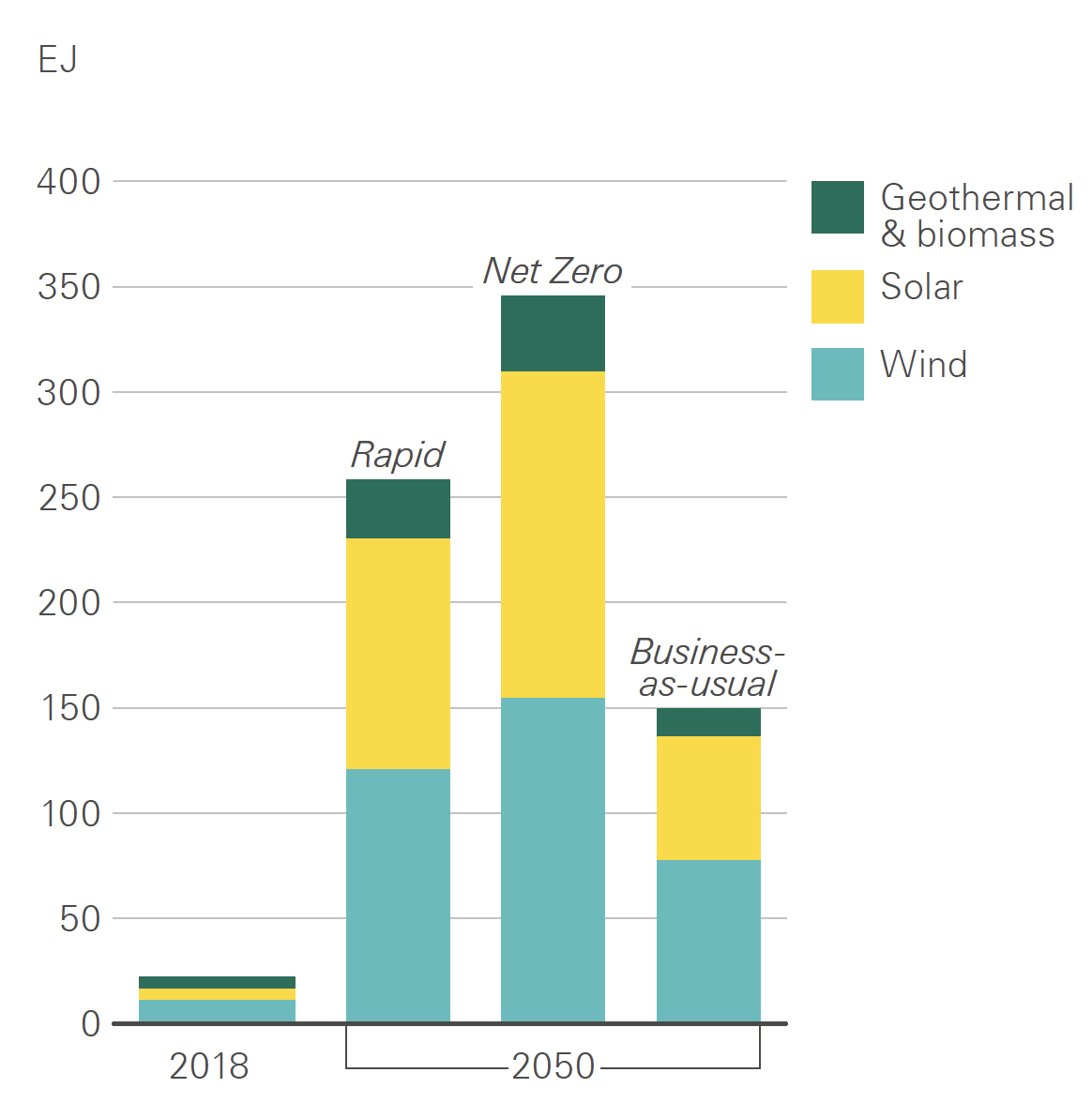 If measures are in place to reduce 2018 carbon emission levels by around 70% by 2050 (BP’s rapid scenario), renewables would meet 45% of the global primary energy demand, or around 70% if the world is to reach net-zero emissions by mid-century.

For the first half of its outlook, BP forecasts annual capacity additions averaging 350GW for wind and 550GW for solar PV respectively – up from an annual average of about 60GW combined since 2000. 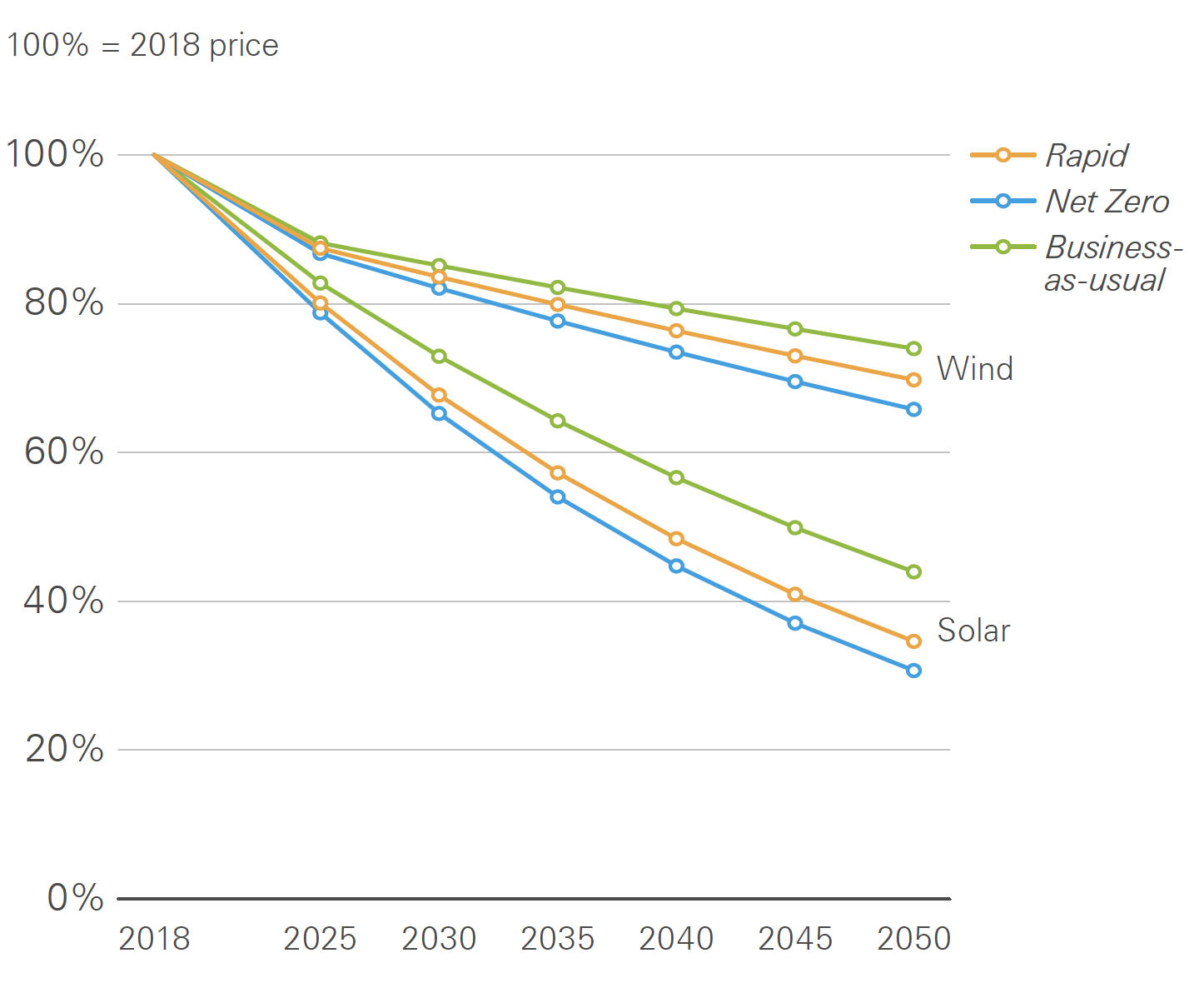 Cost of wind and solar energy by scenario

Despite the significant growth potential of electricity and renewables in energy demand, BP notes that the world is on an “unsustainable path”.

It added that a series of policy measures, led by a significant increase in carbon prices, will be required to meet climate targets and prevent or mitigate global warming.

These policies may also need to be further reinforced by shifts ?in societal behaviours and preferences, BP stated.

The oil and gas major warned that delaying these policies, measures and societal shifts ?may significantly increase the scale of the challenge and lead to significant additional ?economic costs and disruption.

CEO Bernard Looney said: “Even as the pandemic has dramatically reduced global carbon emissions, the world remains ?on an unsustainable path.

“However, with decisive ?policy measures and more low carbon choices from both companies and consumers, the ?energy transition still can be delivered.”?