Scaling up clean energy technologies will not be enough for the world to meet climate targets and prevent climate change, according to a new report.

Transforming the power sector alone will only go one third of the way to net-zero emissions, the International Energy Agency (IEA) stated in its Energy Technology Perspectives Report 2020.

This means greater efforts are needed in other key sectors – especially transport, buildings and industry sectors, which account for 55% of CO2 emissions from the energy system.

More use of electricity in these sectors – whether by powering electric vehicles, recycling metals and heating buildings, for example – can make the single largest contribution to reaching net-zero emissions, the IEA concluded.

Boosting electrification in these sectors will also drive a need for a significant increase in renewable energy capacity: annual capacity additions would need to average around four times the current annual record, which was reached in 2019, the IEA noted. In 2019, 191GW of renewable energy capacity – including hydropower, bionenergy, onshore and offshore wind, solar PV, concentrated solar power (CSP), geothermal and marine technologies – was connected to the grid, the IEA added.

Despite the daunting challenge of transforming the global energy sector and despite the ongoing coronavirus pandemic, the IEA’s executive director Fatih Birol said there were currently several grounds for optimism.

He suggested that current ultra-low interest rates could help finance a growing number of clean energy projects, noted that more governments and companies are throwing their weight behind these critical technologies and added that “all-important energy innovation may be about to take off”.

Birol said: “We need even more countries and businesses to get on board, we need to redouble efforts to bring energy access to all those who currently lack it, and we need to tackle emissions from the vast amounts of existing energy infrastructure in use worldwide that threaten to put our shared goals out of reach.” 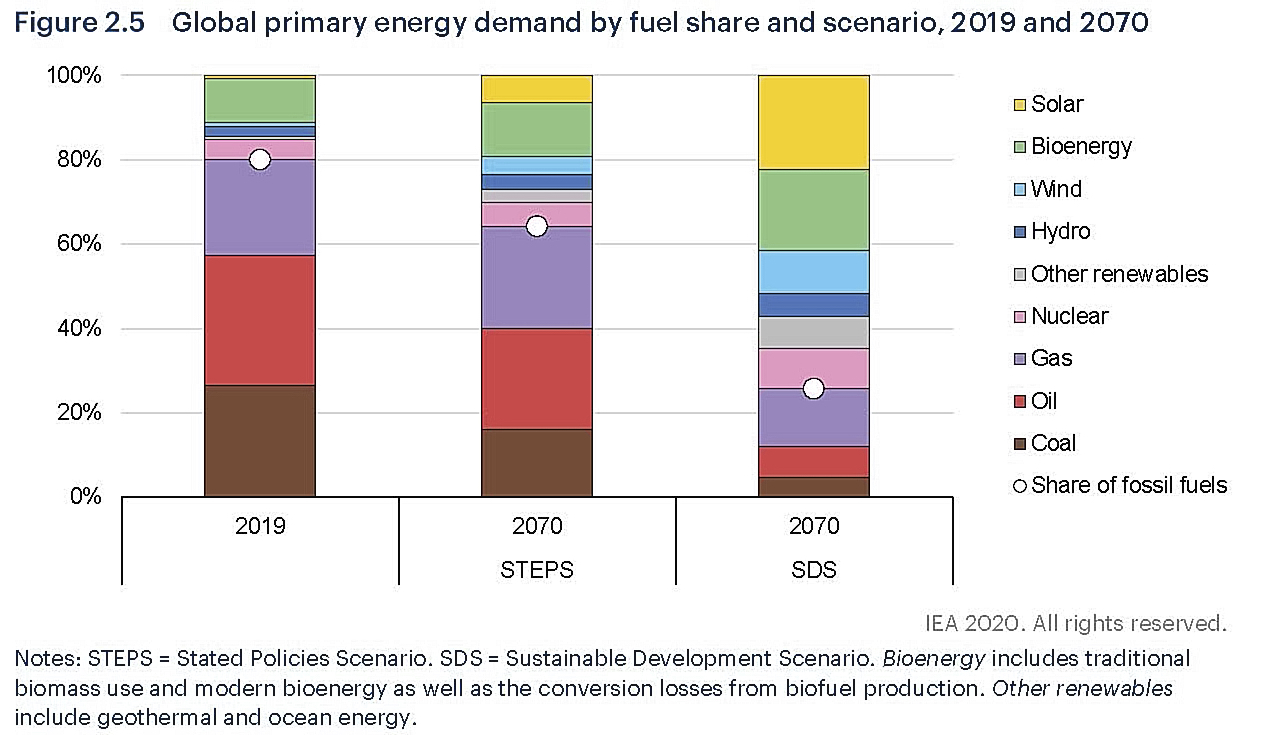 Demand for renewable energy is due to scale up in the next 50 years. They will contribute a far greater share under the IEA's Sustainable Development scenario (right) than under a business as usual setting with current policies (middle)

The IEA suggested that hydrogen could play a key role by acting as a bridge between power sectors and industries where the direct use of electricity would be challenging, such as steel and shipping.

To meet international energy and climate goals, global electrolyser capacity would need to grow from 200MW in 2019 to 3.3TW by 2070. By 2070, they would consume twice the amount of electricity that China generates today, the agency added.

Carbon capture will also need to be deployed across a range of sectors, including in production of synthetic fuels and some low-carbon (as opposed to zero-carbon) hydrogen, the IEA stated.

And modern bioenergy will be needed to directly replace fossil fuels in sectors such as transport, with its emissions indirectly offset through combined use with carbon capture.

Governments will need to support these transitions towards net-zero emissions, the IEA warned.

They will need to issue long-term visions backed up with detailed clean energy strategies to address five key challenges: