Wind and solar PV will dominate the global electricity mix by 2050, with each technology source having a 31% share. But this roll-out of renewables, as well as CO2 emissions possibly having peaked last year, will not be enough to meet the goals of the Paris Climate Agreement, according to new analysis by DNV GL.

By mid-century, wind and solar PV will account for 73% of installed capacity and 62% of annual electricity generation, according to DNV GL’s latest Energy Transition Outlook (ETO). 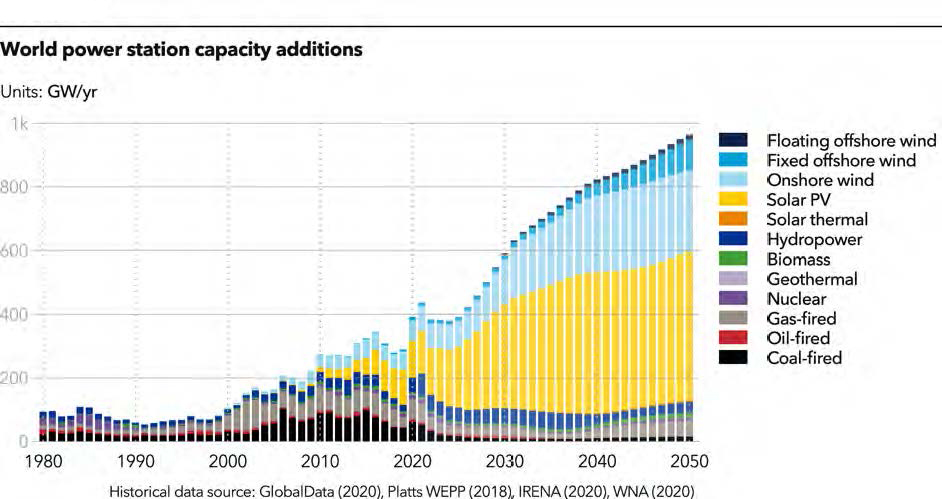 The two technologies will achieve this growth because they are the most attractive economic choices — even as the government subsidies that have helped wind and solar fleets ramp up are phased out, the reports states. Some major wind markets have already switched to competitive auctions.

This growth of renewables generation will displace coal, while other energy sectors will remain relatively constant in DNV GL’s outlook.

But a doubling in electricity demand, changing load patterns from electric heating and vehicles, and a shift in how that power is generated, will require a substantial change in transmission and distribution systems worldwide.

And overall, the energy transition is not taking place fast enough to limit global warming to 1.5C above pre-industrial levels — the most ambitious goal of the Paris Climate Agreement — DNV GL warned.

DNV GL forecasts the world’s carbon budget for limiting global warming to 1.5C above industrial levels will be spent as early as 2028, and predicts the world will be 2.3C warmer by the end of this century than it was in the immediate pre-industrial period.

Wind generation will mostly be from onshore projects, but offshore wind’s contribution will continue to grow, reaching about 28% of total wind production by mid-century, of which about a fifth will be from floating projects.

Together, wind and solar will account for 17TW of installed capacity by 2050 – 14 times the combined capacity installed today – following annual installations of around 780GW in the 2040s.

This growth will be driven by wind and solar PV’s cost-competitiveness resulting from technological advances, economies of scale and smarter operations.

As renewables capacity soars, developers will face challenges including finding the right sites for their projects, adapting to changing incentive schemes and regulations, and managing the transition to subsidy-free renewables, DNV GL said.

Meanwhile, increased reliance on revenue from open power markets means developers and owners will need a greater understanding of electricity market opportunities and the risks involved, the analysts added.

There will be a growing need for hybrid projects — renewables plus storage — to maximise the value of wind and solar projects’ power generation, while renewables will also need to play a more integral role in the grid.

Grid operators will face challenges including expanding, reinforcing and upgrading the grid to maintain high reliability and embracing digitalisation to operate more efficiently and flexibly, the analysts suggested.

In a foreword for the outlook, CEO Ditlev Engel wrote: “We have the technology and we have the means, but we all need to promote new ideas, and to share innovation and proven solutions.

“And crucially, we need policies and regulation to support this.”

In 2050, DNV GL predicts an 8% drop in energy use will be attributable to the coronavirus pandemic, meaning that global energy demand that year will be almost exactly the same as in 2018.

And over the next three decades, CO2 emissions are also due to be 75Gt lower than a scenario without Covid-19, the analysts stated.

However, the coronavirus pandemic is exacting a heavy and tragic toll on lives and livelihoods, increasing poverty and hunger, and reducing growth prospects for those who need it most, DNV GL acknowledged.

In a webinar, DNV GL project director Sverre Alvik said that the coronavirus pandemic must not be repeated. “We need to find a much more sustainable way of reducing emissions,” he added.

Alvik said that while the pandemic and resulting economic uncertainty has led to delayed financial decisions on wind and solar projects, the renewable energy sources were hit to “a lesser extent than fossil fuels”.

But, he added: “Covid is only buying us a few years, and not giving us the long-term impact we need.”

The analysts concluded that there is “potential for a much more socially just and sustainable energy transition that does not cause the harm and disruption associated with the Covid-19 crisis”.

They added: “It needs to be an affordable transition based on highly efficient energy use and net-zero supply.”