MingYang’s hybrid-drive portfolio consists of nine models — four onshore and five offshore (see box). The latest, and largest, is the MySE11-203, rated 11MW with a 203-metre rotor diameter. This product was announced in July, following hot on the heels of an 8-10MW offshore turbine with a 180-metre rotor diameter unveiled in late 2019.

The 11MW prototype, planned for installation in 2021, brings the Chinese company on a technological par with the leading international competitors in the supersize offshore sector. The rapid succession in new hybrid-drive turbine models has been enabled by a systematic automotive industry-inspired platform scaling and expansion strategy. The 11MW giant will be fitted with in-house manufactured 99-metre blades built in hybrid carbon-glass fibre (G&CFRE) composite.

The cornerstone for today’s rapid expansion was the 2008 licence agreement with Aerodyn, offering MingYang access to the novel two-bladed super compact drive (SCD) technology presented at the 2007 Husum wind industry fair in Germany. The agreement was valid for China and additional markets on a project basis. SCD was initially introduced with 2.5/3MW ratings, which became a 3MW commercial upwind model, expanded later by a 6MW downwind offshore turbine with a 140-metre rotor.

Qiying’s wind career started at Aerodyn, where he spent six years working closely with company founder and SCD inventor Sönke Siegfriedsen. “My job involved lots of load calculations on the SCD turbines, including the 6MW, of which a prototype was installed under the MingYang umbrella along the Chinese coast in 2014,” he recalls. “I got to know the overall thinking behind this unique concept well, and increasingly appreciated the choices for two blades and the compact fully integrated design.”

SCD-type nacelles come as standard in three flanged modules, consisting of a two-stage planetary gearbox with integrated rotor bearing, PMG and nacelle back-end. A distinct feature is that all three elements feature similar outer diameters, and these dimensions increase equally with scale.

Qiying explains that compared to conventional geared and direct-drive turbine designs, SCD is a truly lightweight concept, mainly because all element materials serve two active functions. The first is transferring torque loads from the rotor via the rotor-bearing to the gearbox and generator. The second active function is that non-torque loads originating from the rotor are transferred via the structural cast housings to the tower and foundation.

In 2015 MingYang acquired IP rights for SCD technology, enabling the former licensee to spread its commercial wings and independently further develop and market the technology worldwide under the Hybrid Drive tradename.

“In my mind, the two-bladed downwind design offers a good solution for the typhoon-prone offshore markets along China’s east coast and other Asia-Pacific regions, because of the typhoon-survival benefits it offers,” says Qiying. 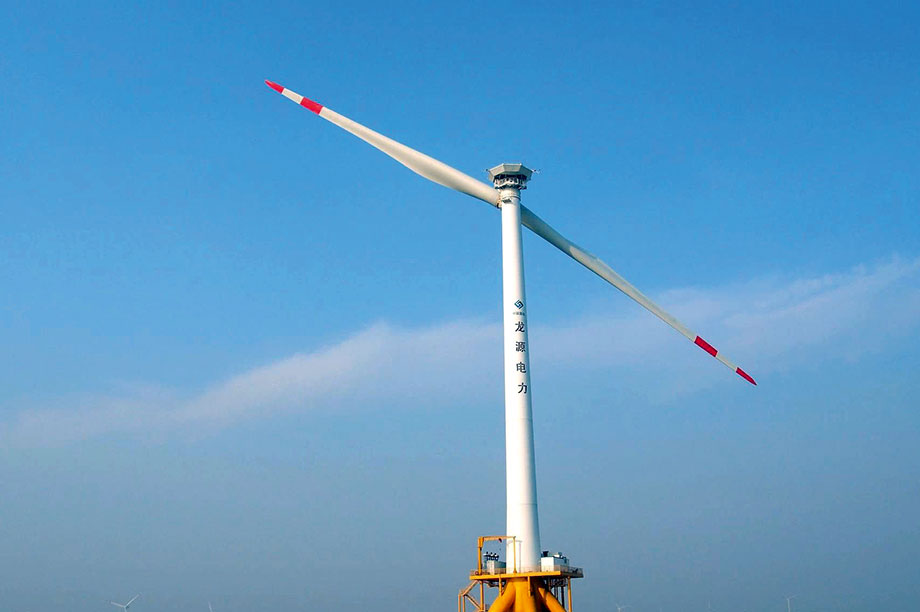 MingYang's initial 3MW two-bladed offshore version was not popular with Chinese utilities, leading the company to develop a three-bladed version

“My first MingYang task was developing the 3MW MySE 3.0-112 for offshore, but we had already noticed that Chinese utilities did not favour two blades, despite their typhoon-survival advantages, because the technology was not mainstream. The platform was therefore developed with two-blade downwind, and three-blade upwind alternative versions,” he says.

MingYang’s major client opted for the three-blade variant, which then became the development basis for all further product additions. The main features of the company’s current thinking on typhoon resistance are

The unusual SCD/hybrid drive-design layout with three flanged modules and the absence of a separate nacelle cover does not allow inboard repairs such as exchanging gearbox components without mobilising an expensive crane vessel.

“In the event of major gearbox or rotor bearing failure requiring full exchange, the complete rotor must be removed. For a generator exchange, the gearbox as well. However, it is key to do things right the first time,” Qiying says.

“There is now over a decade of cumulative track record experience with SCD/hybrid drive and the gearboxes have proven very reliable — even better than initially expected,” says Qiying.

“Back in 2008, we extensively discussed the overall SCD-concept for serviceability and long-term system performance, focused on blades, gearbox, and generator with regard to O&M effort and cost,” says Qiying.

“The SCD concept philosophy is based on design for reliability of each individual component, best-of-class performance, and a design life or more than 25 years. The gearbox with integrated rotor bearing proved very robust, including for the fact that the planetary stages feature a flex-pin support for the planets enabling optimal load-distribution.”

The compact gearbox layout further minimises deflections and deformations for enhanced reliability and lifetime, which was investigated and confirmed through comprehensive deformation analysis. Qiying further refers to long-time proven reliability-based practices in the nuclear, offshore and aerospace industries.

Reliability requirements for planetary gearboxes deployed in Rolls Royce aero engines are, for example, very stringent, and these are built along similar design principles to SCD/hybrid drive gearboxes including the flex-pin solution.

He also refers to a comparative turbine test at a medium wind 7.55m/s Xinghua Bay site in Fuqing City, Fujian province, involving 14 turbines rated 5-6MW from eight suppliers. The two MySE5.5-155s outperformed the others in capacity factor (54%) and availability (99.4%), and were the only ones running at full power during typhoon Maria in July 2018. 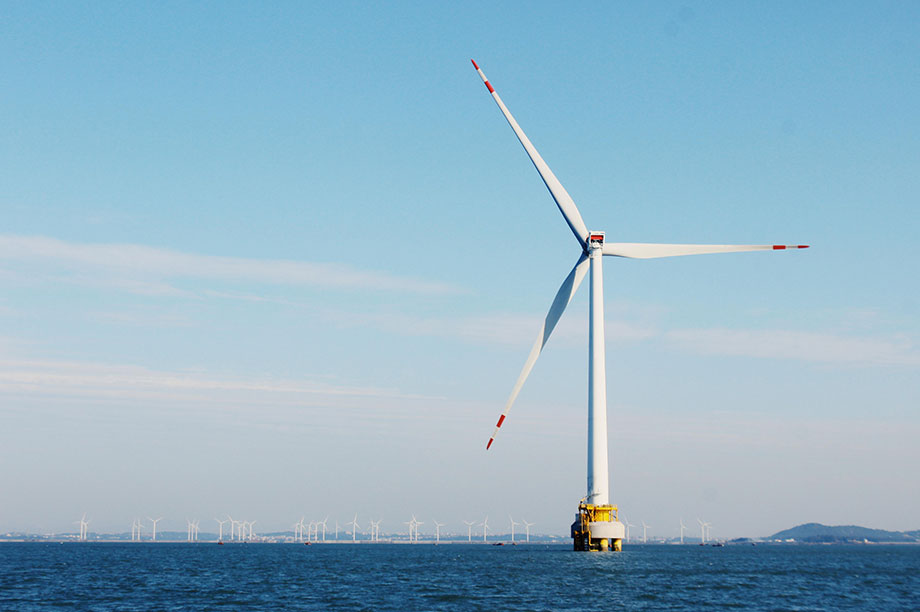 Pitted against competitor models at a test site in Fujian province, MingYang's MySE5.5-155 outperformed the others and was the only one to run at full power during a typhoon in 2018

MingYang develops and manufactures its electric pitch systems, converters and control systems, nacelles, blades and blade moulds in-house in order to retain a strong independent position, as well as for cost reasons.

“Component and system innovation and improvements are impossible if you lack the know-how base. And in-house know-how is an essential precondition to realise essential cost reductions,” says Qiying. “Third-party development tracks are sometimes conducted as a joint development, which offers extra opportunities for design outcome double-checking.”

Key for further hybrid-drive upgrades beyond the MySE11-203 is scalability and continued cost-effectiveness of the technology principles. One crucial area is how the turbine drivetrain copes with the increase in input torque due to higher ratings and fitting larger rotors with a the resulting reduction in rotor speed.

When developing the 7.25MW gearbox, the number of planets in the low-speed gear stage was increased from five to six. For the MySE11-203, a new-design high-torque medium-speed gearbox was developed, but by retaining the compactness and rigidity characteristics offered by the hybrid drive technology with its integrated rotor bearing.

MingYang’s biggest current G&CFRE blade is 87.5 metres long with a 5.5-metre chord. The unit for the MySE11-203 will add another 11.5 metres to the length. Ambitions for a leading global offshore wind position do not stop here, as the next planned frontier for Qiying is a turbine of “at least 15MW”. This turbine will require 110-115-metre blades, serving both low- and high-wind applications in different global markets.

“Both technology steps are doable from R&D, manufacturing and time-to-market perspectives,” says Qiying. “Hybrid drive is very flexible with excellent scaling potential, and we deploy a platform strategy based on proven automotive industry practices.

“Huge parallel effort is put in loads reduction through advanced turbine control, one of our core competences. The 11MW prototype will be fitted with load-based individual pitch control as part of the measuring campaign. All these experiences will become building blocks for 15MW+, which we plan to commercially launch in three to four years.” 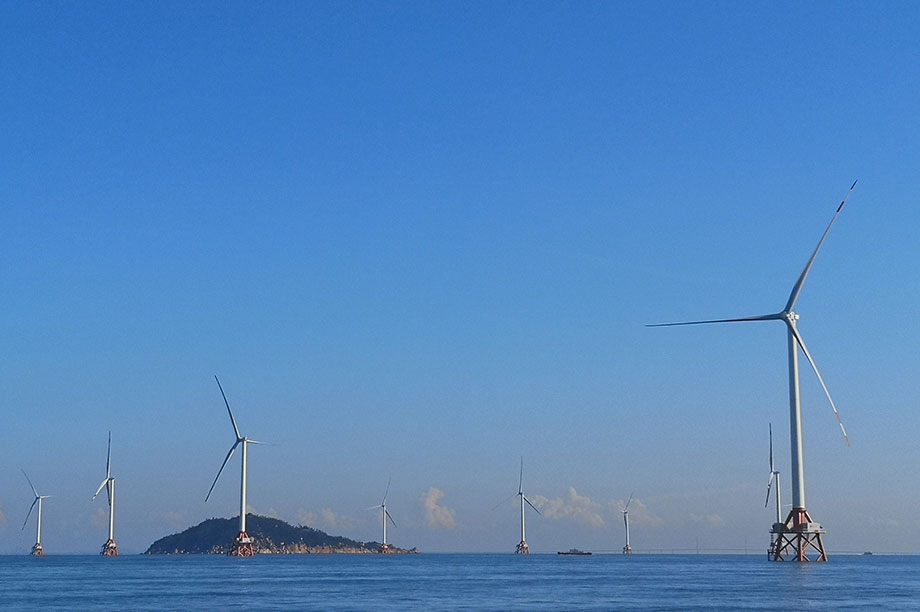 MingYang nacelles are small and light compared to most competitors, with the MySE8.3-180 weighing in at only 277 tonnes, for example.